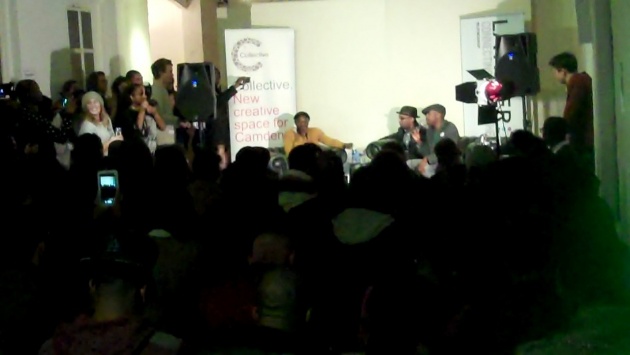 Timothy Story and William ‘Power’ Packer are the esteemed director-producer team behind the hit movie, RIDE ALONG. Doing the promotional rounds, they rocked up at the Camden Collective in North London to participate in a Question and Answer session organised by Latimer, a production house that specialises in product by young people for young people.

Now, I know what you’re thinking: ‘Larry, you ain’t no budding young filmmaker.’ Offered a sticker to wear for a networking session after the talk (others bore the legend ‘director’, ‘actor’ and ‘Penny Woolcock’) I asked for ‘crumbly’ to be written on mine. Of course, they didn’t serve dessert, only coca cola and beer at £1.50 a pop. I was, of course, there to accompany my young ward who was genuinely anxious to arrive on time. Of course, seven o’clock does not mean seven o’clock; the talent keeps you waiting.

The evening was MC’d by Michael Salami. Well, that’s what he said. He schooled us in the gentle art of tapping our shoulders (on one), stamping our feet (on two) and whooping deliriously (on three). Just like Tuesday Night Chair-robics. I was worried it might be the Quenelle. We went through these motions for two support acts. The first was Sebastian Thiel, the director of ADOT’S APPRENTICE, a parody of the ridiculously successful television series starring Alan Sugar and fifteen other people you’ve also never heard of. The second was a trio who made comedy skits. The short they offered was about the end of the world. ‘Bruv, the world’s ending. Let’s do something.’ One guy wanted a television and stole one, but in reality wanted to smash one with a hammer. One guy wanted to spend the night with three supine women but in reality could not get a date. The third wanted to steal a cake, but actually hijacked a Mr Kipling’s van. Of course, the world didn’t end and they faced their reckoning. Both shorts had some laughs and made good use of limited resources.

Then came the main event: Messrs Packer and Story.

Normally, everybody wants to hear from the director and wishes the producer would just be quiet. However, Mr Packer was livelier of the pair. We didn’t identify with him as a visionary, rather as a guy who gets stuff done. He was an electrician from St Pete’s in Florida. He made it to Hollywood. The destination is not important, nor apparently is the journey. I wondered what was left: the rest room breaks?

Will didn’t want to be a film producer. He was a kid in college who helped out some other kids making a movie, CHOCOLATE CITY. It had a budget of $20,000, made with the usual begging and borrowing. He helped the makers send it off to Hollywood and thought, ‘hey, we’re going to turn a profit’.

So Will says ‘hey, this is a film about college, let’s show it to a bunch of college students here in Florida’. They organised screenings. They booked a second run theatre to release it. The film wound up making $100,000. Will, who had trained as an electrician and wanted to go into business found the business he wanted to go into and he never looked back.

The man has made five movies with Idris Elba, the most recent of which is OBSESSED – he serves respect.

He had also paid his dues. He started out working on a Hudlin Brothers movie making sure the cables to the monitor never got tangled. Some of the talent treated him as the lowest of the low; others gave him respect. ‘Most of that crew came at some point to ask me for a job. Who do you think I hired?’

If his first lesson is ‘respect the crew’, his second is ‘be the best you can be in your area before you think of going to Hollywood’. He spoke of 10,000 hours, which is not the amount of time a surly teenager spends in the bathroom in a calendar year (how about those school mornings) rather the length of time required to learn your craft. Mr Packer is successful because he paid attention to detail, the locations and the budget. He lets the director do his thing knowing he does not have to worry about the macro stuff (which by the way is a chain of supermarkets in the UK). Will advocates competition with your peers: ‘you gotta be better than the people in your yard before you can cross the street and do Hollywood’. It might take you more than 10,000 hours to learn your business, or less, but learn it.

Third lesson: work with someone you can rely on. We might all be there to network and Will knew they might want to talk to him but the person they might work best could be standing right next to you. Film is a collaborative business. You need someone who’s got your back, or a ride, or a ride that is also his back (‘you don’t need to step over that puddle’). If you are that person, do your stuff and do it well.

All right, lesson four: be a do-er not a talker. A lot of people in the industry talk a lot of stuff, but don’t do it. So get out there. Shoot a film on your i-phone or whatever weird gadget thingy you have. (I thought a Flip had something to with gymnastics.) Show it. Generate web content, get a bunch of hits. Once people know you’re successful, they’ll hook you up with commercial opportunities, actual television or a movie deal.

Lesson five: it’s a marathon. There’s no such thing as overnight success. You got to keep doing your thing. Tell your parents that you out filming because this is what you do. Tim Story made his first film when he was 12 years old. 12! (Tim nods.)

Lesson six: don’t give up. That day when you decide: ‘I got to work in Poundland. I wonder how much they float their shares for?’ You could be missing your big break. That guy who comes in and says ‘I’m looking for Asian kids to work with Riz Ahmed. Any talented Asian kids in the house?’ You could miss that.

Will has made five movies with Idris Elba – just think.

Lesson seven: it’s not about the money, it’s about the work. Don’t make movies for cash, though the odd butter sandwich might help. Make it for the love of the finished article. Surround yourself with the best. You’re only as good as your weakest member (well, I can see the innuendo in that).

Lesson eight: use social media to promote your film. You do? Great!

Will Packer could do the inspirational talk in his sleep; no offence, but I wouldn’t want to be his roomie. But he does it spectacularly well. I came out energised, inspired. Where did I park the bus?

STAR TREK BEYOND AND WHY YOU SHOULD SEE IT?

(image courtesy: trekmovie.com) I watched Star Trek Beyond on IMAX just two or three days after it o…

The truth about love..

Hey there everyone, my first blog is going to be about love. Yeah that's a word which even a child k…

WARNING: USE OF SOCIAL MEDIA CAN AFFECT YOU BADLY

Do you know when the first email over the internet was delivered? Well, it might be a bit of knowled…

WOMEN AND THE PRESSURE TO LOOK GOOD

The biggest crime done through the hacking

A hacker is a person obsessed with computers. At the heart of the obsession is a drive master the co…