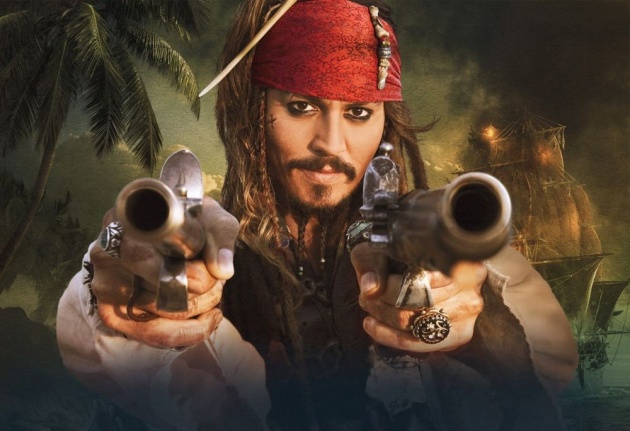 Like you, I was getting tired of the "Pirates of the Caribbean" and "The Amazing Spider-Man" franchises!  The last films of both series were mediocre at best.  But many moviegoers enjoy seeing films that will dazzle you with special effects but will bore you to tears with their storytelling.  Case in point, "Transformers: Age of Extinction."

So can you blame Disney and Sony to try?

The House of Mouse has announced that "Pirates of the Caribbean 5" is moving forward with a release date of July 7, 2017!  The last film of the franchise has crossed the $1 billion mark, so yup, like or not, you're going to sail away with "Caribbean" again, for the fifth time!

Johnny Depp has officially sold his soul and lost any acting credibility he once had.  Are you listening Robert Downey Jr.?  You're next!

Meanwhile, in the superhero territory and fresh from Comic-Con, Columbia Pictures aka Sony has revealed that "The Amazing Spider-Man" will have its own spinoff featuring the Sinister Six.  In the Spidey universe, the Sinister Six is a group of super-villains itching to kill Spider-Man.

Wait, didn't Sony learn from Sam Raimi's "Spider-Man 3" and the last "The Amazing Spider-Man 2" movie that too many villains and characters can kill a story?  But then again, Joss Whedon showed the reverse -- he put one too many heroes in "The Avengers" and it worked brilliantly!

And you can rest easy that writer-director Drew Goddard, who initially worked with Whedon in the "Buffy the Vampire Slayer" TV show (I love that show, I'm its No. 1 fan!) is a good storyteller so he may be the silver lining.  "Sinister Six" will be released on November 11, 2016, the same time period last year when "Thor: The Dark World" eviscerated competition.

So what about our friendly neighborhood Spidey?  Sony will release the third installment of the franchise in 2018.

But notice how Sony didn't list a specific date!  Because the studio has a lot to clean-up after "The Amazing Spider-Man 2!"  The sequel didn't even reach the magical $200 million mark!  And it was widely derided except for the wonderful performance by Sally Field!

But let me ask you this, after watching Spidey villains duke it out in "Sinister Six," will that intrigue you or turn you off to see the third "Spider-Man?"

CULVER CITY, Calif., July 23, 2014 – Columbia Pictures today announced its updated release strategy for the nearly $4 billion Spider-Man franchise.  The next film in the series will be Sinister Six, writer-director Drew Goddard’s highly anticipated villain team-up, which is the first of several planned character and story expansions. The film, which will be produced by Avi Arad and Matt Tolmach, will hit theaters on November 11, 2016.

Columbia Pictures will then release the next installment, The Amazing Spider-Man 3, in 2018.

The studio also announced that it has slated Uncharted for June 10, 2016, a prime summer release date for the highly anticipated film. The movie is an action-adventure based upon the critically- acclaimed and top-selling PlayStation® video game series, which follows the adventures of treasure hunter Nathan Drake. Seth Gordon will direct the film.  The latest draft of the screenplay is being written by David Guggenheim, and the film will be an Arad/Atlas Entertainment Production, produced by Charles Roven, Avi Arad, Alex Gartner and Ari Arad.  The video game series was developed by Naughty Dog and published by Sony Computer Entertainment America, LLC (SCEA).  Uncharted takes the date on the release schedule previously held by The Amazing Spider-Man 3.

Belgrad added, “June 10 is a great date for Uncharted.  It’s just the right place for this exciting action-adventure film.”