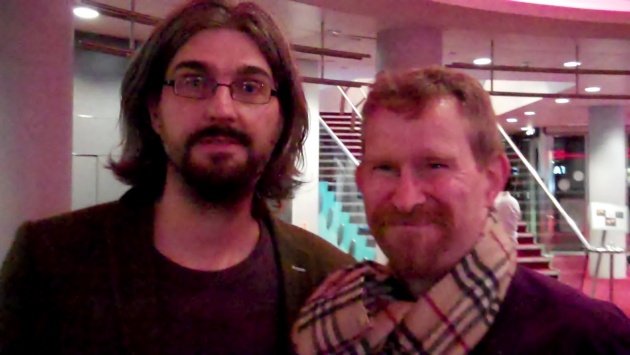 Simon Horrocks, metteur-en-scene, THIRD CONTACT, and I at the BFI IMAX, London

Well that young Simon Horrocks fellow has finally done it. He’s premiered his THIRD CONTACT movie at the BFI IMAX at London’s Waterloo. Kumar and I were amongst the assembled throng greeted by young Mr Horrocks, who was genuinely taken aback by the Kickstarter support he had received.

It’s also a pleasure to report that a film costing £4,000 and written, produced, edited and scored by Mr Horrocks is actually quite compelling. It’s cerebrally rather than emotionally engaging but no worse for that.

A black and white film with moments of colour, it tells the story of a psychiatrist, Dr Dave Wright whose life unravels after hearing about the death of a patient, Rene, who was abused as a child. Rene’s sister comes to pick up the body. Early on, Dr Wright, or Dave is told by another patient, Carl, about quantum suicide. In one world you die, in another you live. If you live, the gun simply makes a click. A strange thing to tell your psychiatrist, I’m sure, but Dr Wright is the sort of shrink who complains that the world is pretty miserable so why be well-adjusted?

Dave spends time with Rene’s sister and almost kisses her. He finds notes of random memories, something that happened in 1990 or 2003. These notes represent destinations. Dr Wright finds himself phoning up a weird organisation that drills holes in the heads of its clients willing to explore a new level of existence. (It’s called death.)

Horrocks, who confessed during the Q and A, that he had experienced depression prior to writing the screenplay after his recording career abruptly ended, is like a West Country New Ager. His style of storytelling seems fresh, with sequences carefully put together. Occasionally the staging isn’t slick – Horoocks did his own fight choreography, more scraps really – but you are genuinely sucked into Wright’s world, where he seeks answers from a Reiku lady who specialises in tingles.

I’m not going to pretend that I can explain everything that happened, though a character loses a baby, another patient, Helen, submits to Final Destination treatment and there’s a thug called Pablo. Dr Wright takes an extreme step to force Rene’s sister to ‘move on’ (it involves a toilet).

THIRD CONTACT is the kind of film that will attract an audience who want to be challenged. It demands and merits repeat viewings. Specialist handling could make it a cult hit; the culmination of almost three years of work.

KICKSTARTER and crowd-funding – enabler or impediment

Visitors to Sundance London got the opportunity to quiz Yancey Strickler, the CEO of Kickstarter, th…

The Kickstarter funds have done their trick. London-based filmmaker Si Horrocks has had his BFI IMAX…

Recently I received a message from one of my followers on Twitter, Si Horrocks, to spread the word a…