Misfiring Germany under pressure against Georgia 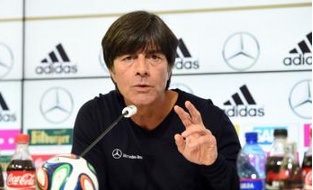 Germany coach Joachim Loew is set to name a full-strength side for Sunday's clash at Georgia as the world champions look to get their Euro 2016 qualification back on track.The Germans are used to dominating qualifiers for major tournaments, but have picked up only seven points from their first four matches so far on the road to France 2016.The world champions find themselves in the unusual position of joint second in Group D, three points behind leaders Poland and level on seven with Scotland and Ireland while Georgia are second from bottom.With Ireland hosting Poland in Dublin on Sunday and Scotland facing bottom side Gibraltar in Glasgow, Germany need the three points in Tbilisi in their bid to go top of the group.

"We know that we have to win on Sunday," said Loew.

The Germans are suffering a post-World Cup hangover after their shock 2-0 defeat to Poland in Warsaw and a draw at home to Ireland gave them only one point from a possible six last October.

Their defeat in Poland was their first to their neighbours in 19 meetings and ended their run of 18 competitive fixtures without defeat.

The world champions then laboured to a 4-0 win against part-timers Gibraltar last November and needed a late Lukas Podolski equaliser in Kaiserslautern on Wednesday to avoid a shock defeat in their 2-2 friendly draw with Asian champions Australia.

"We know that things are now getting serious in terms of qualifying, but none of us need to worry," said midfielder Sami Khedira.

Germany captain Bastian Schweinsteiger, who sat out the Australia draw, will make his first appearance since the World Cup final, while goalkeeper Manuel Neuer returns after a minor knee injury.

Both defender Holger Badstuber, who has a hip injury, and winger Karim Bellarabi, who has a cold, have stayed back in Germany and will not feature.

"We are under pressure, but there is no panic in our ranks."

Alongside Schweinsteiger and Neuer, Loew is set to also include World Cup-winners Thomas Mueller, Toni Kroos, Mats Hummels and Jerome Boateng, who all sat out the Australia draw.

"We will win on Sunday," said Mario Goetze, who scored Germany's World Cup-winning goal in Rio, but failed to impress up front alongside fellow attacking midfielder Marco Reus against the Socceroos.

On paper, the match at Tbilisi's Boris Paichadze Erovnuli Stadium should present the Germans few problems.

Georgia have lost all three of their previous games against Germany, who posted home and away wins when the sides met in qualifiers for the 1996 European championship, which the Germans eventually won.

Loew has already tasted victory against Georgia when Germany enjoyed a 2-0 friendly win in Rostock in 2006.

Georgia's new coach Kakhaber Tskhadadze will be in charge of his first match.

His predecessor Temuri Ketsbaia ended his five-year reign and resigned after last November's 4-0 home defeat to Poland after opening their qualifying campaign with three defeats and a 3-0 win over in Gibraltar.

Georgia are without a win in their last five competitive home games.

Well things has been changed and global changing is accelerating at high pace. just as it is happeni…