Remember when I blogged about Mother's Day Surprise Ideas? I had those ideas in mind because I personally want to do a little surprise for my mama. It was an idea I thought of four weeks ago and I had already been thinking which one should I pursue?

It's been a month and it's already Mother's Day. Out of the five ideas which I have listed in that blog, I somehow only got one idea realized and that's to treat my mama out together with family.

Today, let me share how this Mother's Day surprise was planned and how it was realized together with the help of my older brother. 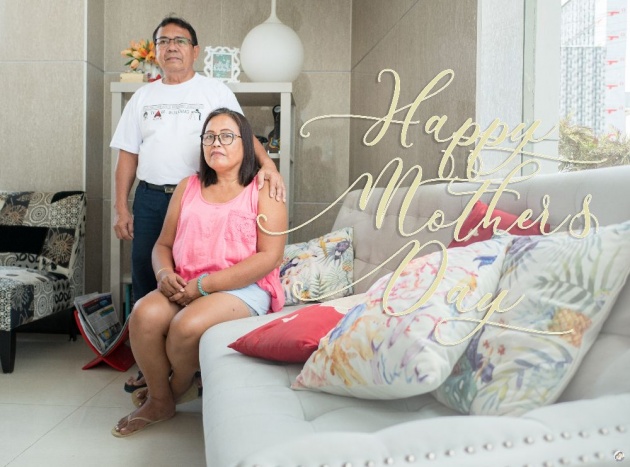 The 14th of May had been recently declared as a holiday by the President of the Philippines, Rodrigo Duterte. This is for the elections of Barangay Officials and so it's a long weekend again here in the country.

Originally, the planned surprise should have been on the 19th, the third week of the month but because of the long weekend, James and I decided to go to Bohol instead and spend the holiday there. Plus since get the plan rolling.

I didn't let my parents know about us going home. My older brother together with his wife planned that we will meet up in a restaurant and we'll surprise Mama!

My brother acted very well, he said he is meeting a client in Tagbilaran City and he wants both my parents to come along because the clients are an elderly couple as well.

According to their stories, my father had been asking who are these couple and their background so they can prepare for whatever they could talk about. My brother seemed to be a good actor, he was able to somehow get their mind focused that they are meeting a client. 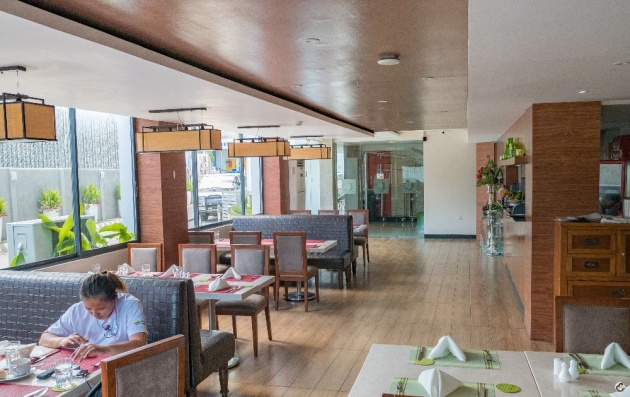 After much research, I decided we should have lunch at Aioli Cafe and Restaurant. The reviews online had positive and negative sides but I like their positive sides and I felt like it weights out the negative points so I contacted the restaurant and arranged for a reservation. I guess I should create a separate blog about the review on this restaurant soon.

On Saturday, our day started pretty early, we had to do some errands and so James and I woke up at five in the morning. After the errand, we had to run to the pier to catch up our 8:20 AM trip to Bohol via OceanJet. There were hundreds of people flocking at the terminal, all wanting to go home because it's a long weekend and Bohol is under the month of May fiesta fever. 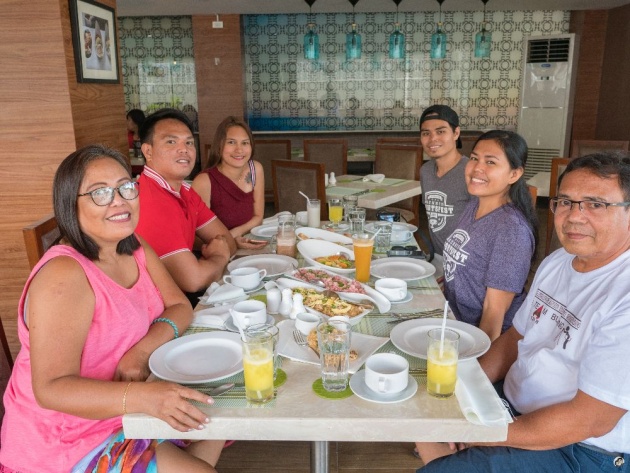 James and I were seated at a long table good for eight people, we were asked by one of the staff as to how many were we. It was not too long, my brother messaged me that they were already at the restaurant's entrance, he came inside first and checked where we were seated. Then came out and brought parents in.

I was already laughing at the thought that the two of them seriously believed they were meeting up a client. I was hiding behind a wall when they came in and as they slowly reach the table, I revealed myself and they both were surprised and started laughing.

I laughed as well with the look on their faces! They burst into laughter when they saw me and James. They said they thought it would be us as well but erased the idea because my brother was very good at acting!

The surprise was a success but I guess I should have done better. I realized I should have brought flowers and a special gift. I somehow forgot about it because of our busyness. Anyways, I guess I will have to do that in the next year.

Lunch at Aioli Cafe and Restaurant 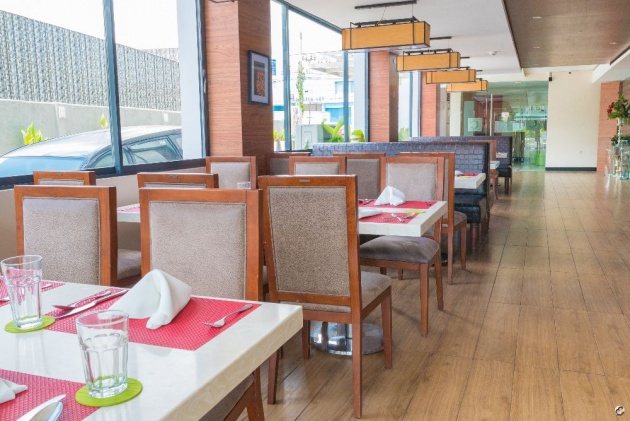 As soon as the laughter sink in and we calmly sat in our respective chairs, we also started ordering food.

Aioli Cafe and Restaurant had received four and a half stars in Tripadvisor and the reviews said they have good food but the service needs a major improvement. I didn't look into the details as to when were the reviews added so I thought we must test and see if the same case is applicable once we visit the restaurant.

It took almost an hour of waiting before our food came in. The presentation was pretty neat, the plates were nicely thought of and the dishes looked appetizing! 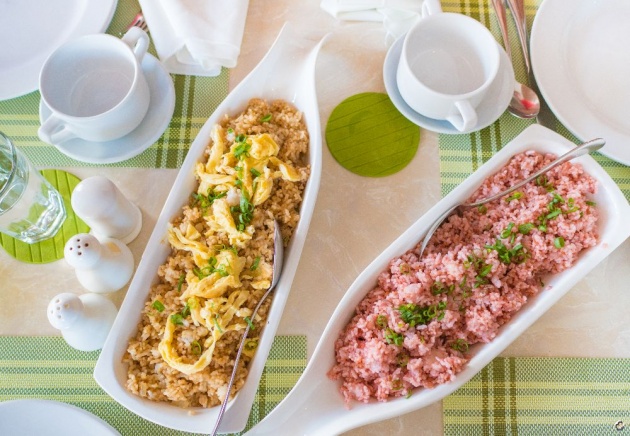 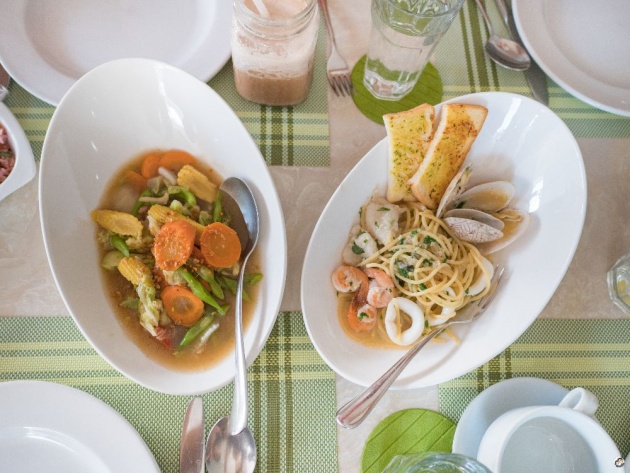 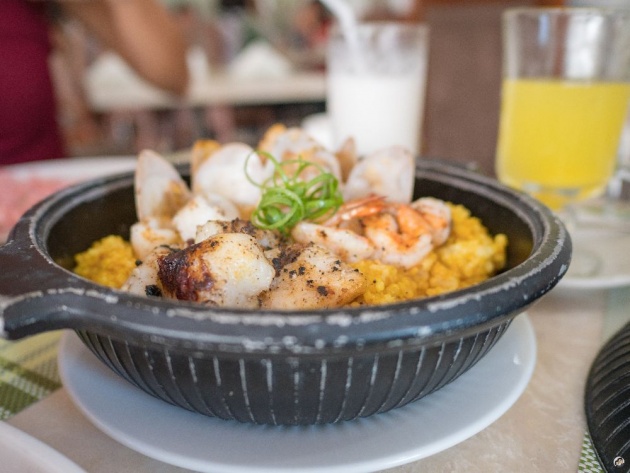 However, it took a long time of waiting that all of us were already starving, so we had to start eating when two of our ordered viands came in and just allowed them to serve the rest while we were already having lunch.

Hungry people would eat everything that's on the table for sure so we started with the Calamari, Chopseuy Guisado, their Ceasar's rice as well as the Binagoongang Rice, the tofu dish as well as the Mediterranean Seafood bowl. 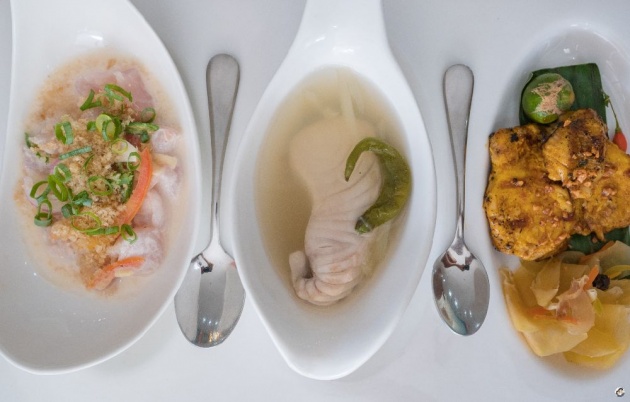 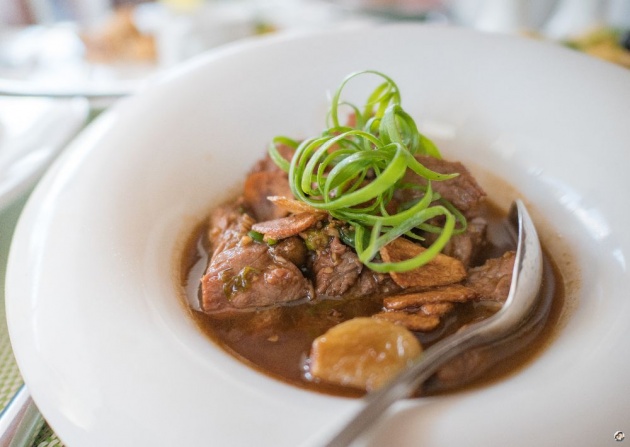 The rest of the orders like the Fish Sugba Tula Kilaw combo, Seafood pasta, and Beef Salpicao came afterward.

When we finished eating, we had a photo session in the lobby of the hotel. The Aioli Cafe and Restaurant is located in the ground floor of the 717 Cesar Place Hotel. It would have been a good spot for the entire family to take photos with but we are missing two brothers, one sister in law and a niece and a nephew. Anyways, we still enjoyed each other's company for this surprise. 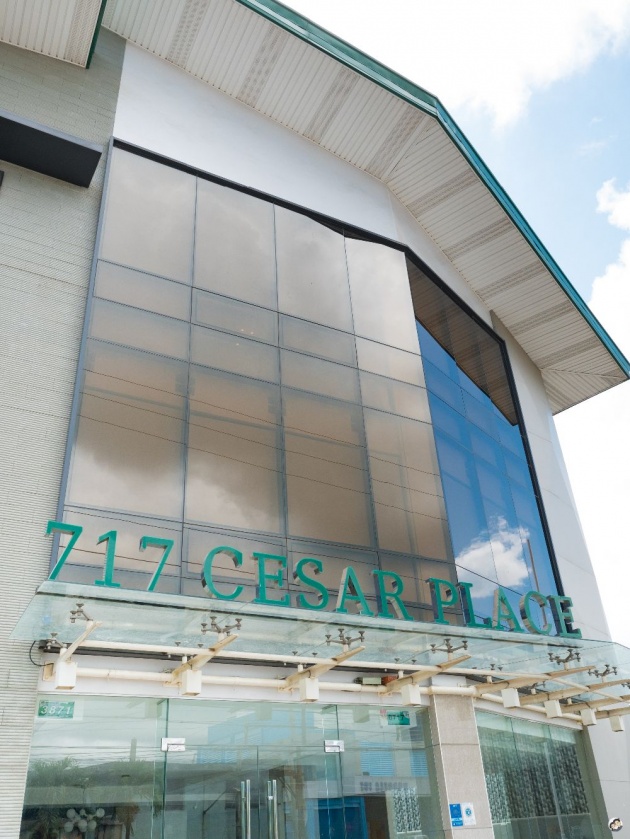 I could then say that the planned surprise went successfully, we had the rest of the afternoon to chill, we went to the mall, had roamed around, bought some stuff and then ended the day with sweet cakes and coffee at Mosia Cafe. It was a good day and I am glad my mother enjoyed her special day.

Our mother's life should be celebrated, what she did to us, how she took care of us and how she loved and continue loving us is something that is unexplainable, she is selfless and would do everything for her children.

A day of celebration for her worth is not enough to truly grasp the great things she had done. But this day is also a blessing that we are able to show how special mama is to us and how much we love her.

How did you celebrate Mother's Day? Share your story today!