The science behind our story is a star. A star starts as a nebula which is a cloud of gas and dust. Then the temperature inside the core of a nebula piece reaches 10 million k and fusion begins. As the energy radiates a star is born. If the remaining dense core from a supernova is more than three times more massive than the Sun, probably nothing can stop the core’s collapse. The gravity near this mass is so strong that nothing can escape from it, not even light. Because light cannot escape, the region is called a black hole. In stars that are more than about eight times more massive than the Sun, stages of evolution occur more quickly and more violently. Heavier and heavier elements form by fusion, and the star expands into a supergiant. Then the outer portion of the star explodes, producing a supernova. 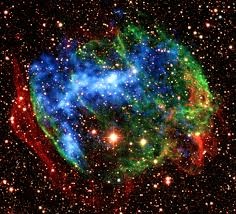 On a warm summer say in 2054 they were twins named Liam and Emily walking with their parents in the park. The sun was shining while flowers of every color surrounded them. The waters were crystal blue everything seemed perfect. Then there whole world stopped when they were attacked. The parents were left to die while the twins were taken to a lab. There they were experimented on by Dr.Bob and Sharkiesha. One day in the lab the twins inhaled a nebula that was contained in a bottle. The heat forming in their body forced them into a coma for 13 years. During their 13 years of unconsciousness Emily’s nebula grew to become a supernova while Liam’s nebula became a black hole.

When the twins finally woke up they were 16 and remembered nothing of their life before they were kidnapped. Dr.Bob and Sharkiesha told the twins they were their parents and thought they had lost them forever. They still didn’t know the reason the twin’s coma. One day while Emily and Liam were in the room alone a small bright yet alluring light that was an electric blue formed in her hands. In Liam’s hand formed a misty blackness that had an air of coldness and distance. Then their pervious memories came back to the twins. Liam became overcome with rage and planned on killing Dr.Bob and Sharkeisha. Emily was more hesitant on what to do so Liam went ahead and killed Dr.Bob and Sharkiesha. Liam had the power of a black hole so he was able to suck anything in even light. Emily had the power to create extraordinary light also immense heat and super speed. They both were able to fly.

After killing Dr.Bob and Sharkeisha Liam became power hungry. He decided to take over the world. Emily did everything in her power to convince him to stop but failed. Emily had to come to the decision whether or not to stand by her brother. She decided to fight for good and Liam and Emily fought epically with the whole world watching. In the end Emily prevailed. Liam disappeared into the unknown. Emily then decided to search for her parents and found them in a small apartment in the Bronx. They lived as a happy family for a while. But one day Emily’s supernova exploded killing her. Her corpses went formed a constellation in the sky. On a clear night you can see a constellation of a boy and girl holding hands. Each star shines brightly and brings a certain warmth to the eye. And if you look really closely you can see a black mist next to it. Somehow the family knew that it was a black hole was Liam and the twins are now together.

The Inner Dimension is the basis of all spiritual work, and the teaching of it is always divided int…