NFL Hall of Fame Running Back Marshall Faulk: Life After the Game

With the Super Bowl now in our rear-view mirror, #InTheLab is looking back at some of the amazing coverage we compiled over the week. Sorting through the events we attended and the amazing, talented people we had the pleasure to speak with, we are reflecting on some of the messages delivered during the information overload that is Super Bowl Week and one that stands out was communicated by NFL Hall of Fame Running Back, Marshall Faulk. Currently enjoying a successful run as a broadcast analyst for the NFL Network, we interviewed Faulk at a function at the Empire State Building and one of the topics our host, Arthur Kade engaged with him was the subject of life after the game is over for the professional athlete.

Marshall Faulk played 12 seasons in the NFL at an elite level. That is the aberration, not the norm. That is why Marshall Faulk is in the Hall of Fame. The average career for an NFL player has been a matter of debate. Depending on what metrics you use to arrive at a number, the average NFL career will usually span anywhere from 3.5 to 6 years. To be sure, there are any number of factors that can enhance or derail an athletic career, injury being the most obvious. More important than how long the number of years on the field, is what the league and the players themselves can do to ensure that there is a life in the real world after playing days are over.  Most think that pro athletes are college educated with scholarships paving the way and that may be true to a certain extent, but we would be naïve to think that every athlete who leaves the hallowed halls of an educational institution for the glory of  professional sports is equipped or properly prepared for life after. According to a March 2009 Sports Illustrated article, 78% of former NFL players have filed bankruptcy or find themselves in financial distress within 2 years of retirement (http://ityb.it/Lv0N-N).  While many 9 to 5 working class stiffs may find it hard to find sympathy for a professional athlete who can make more in those 3.5 years than many will earn over an entire lifetime, the fact remains that many of these athletes who play for the love of the game, putting their health and bodies at risk for the entertainment of millions are totally clueless to the reality of what awaits them after the cheering stops.

The NFL has taken strides over the last few years to protect players from injury, particularly head injuries through rule changes and better equipment and also offers programs through the NFL Life Line which educates and trains them for the inevitable day when the game is over. As stressed emphatically by Faulk, it is also on the players themselves to actively explore this while they are still playing the game and can use that platform to their advantage.

Marshall Faulk was one of the greatest to play the game and now as one of the highest profile ex-players to continue that success after walking away, it is a tribute to the individual that he is speaking out on behalf of the players as an advocate to raise awareness to a problem can potentially ruin lives... 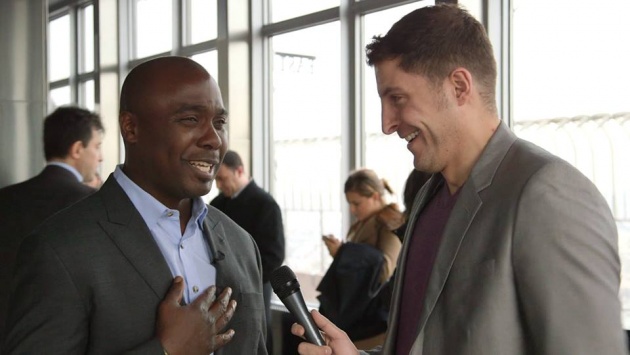 This is the interview of Louis Szkely, known professionally as Louis C.K., is an American comedian, …

Lady Gaga to sing US national anthem at Super Bowl