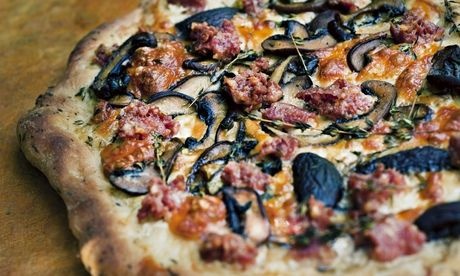 I have my ball of dough, soft and floury to the touch, kneaded with love and energy and ready to roll into the thinnest piece I can manage. All I need now is something interesting and suitably autumnal to sit on top of it.

There are as many options for finishing a homemade pizza as there are cooks. Give me fried garlic mushrooms with melting mozzarella, spicy sausage with smoked cheese, or perhaps crème fraîche and basil with grilled aubergine and thyme. Or what about a layer of pesto with grilled courgettes and Parmesan, or an assembly of marinated artichokes, the chargrilled sort from the deli counter, with green olives and flat-leaf parsley?

In autumn, I like the idea of slices or strips of sausage on my pizza. Not breakfast sausage, which somehow feels plain wrong, but thickly sliced salami or maybe chunks of chorizo. Better I think is the sausage I used this week, a chubby salsiccia, spiced with black pepper, fennel and chilli, which you can often pick up at Italian delicatessens.

Friends seem to like a mozzarella-topped pizza crowned with a golden egg yolk and scattered with peppery rocket. A small version maybe, where you would need as many as two or even three per person. The idea is that the egg is added at the last moment, then cooked for barely a minute or two so that, when cut, the yolk oozes into the molten mozzarella.

There are other ideas that might fit the mould for an autumn pizza, too – onions, sliced and softened by slow cooking in olive oil, fillets of anchovy and rashers of smoked bacon, or perhaps morcilla, the soft Spanish black pudding, pancetta and a mixture of cheeses, or slices of thinly sliced, air-dried hams with black olives and rosemary.

Put the flour into a large, warm mixing bowl. Add the yeast, a good pinch of sea salt and then pour in most of the water. Mix to a soft dough, by hand or using a food mixer fitted with a dough hook. Add more liquid if your dough seems too tight.

Flour a work surface generously, then turn out the dough and knead until it feels smooth and elastic. A good 10 minutes of firm kneading is necessary if you are doing it by hand, five or so if you are using a machine.

Put the dough in its bowl and cover it with a tea towel or kitchen film and leave in a warm place for about an hour, until it has almost doubled in size. Generously flour your board, then roll out the dough to your desired size and thickness.

You can use unsmoked mozzarella if you can’t find smoked, but I like the effect the smoked cheese brings to this. If the spicy Italian sausages evade you, then use a herby breakfast sausage. Makes two large pizzas.

dough 250g, about half of the above
olive oil 3 tbsp
thyme about 20 single stems
rosemary 8 stems

Get the oven hot. I suggest 230C/gas mark 8. Strip the leaves from the rosemary and thyme. Pour the olive oil into a blender, add the rosemary and thyme leaves and process until the herbs are finely chopped. Keep a little of the herb oil back, then knead the remainder into the dough. Return the dough to the mixing bowl, cover with clingfilm and set aside in a warm place to prove once more.

Slice the mushrooms then cook them in the oil in a shallow pan, for 8-10 minutes until golden brown.

After half an hour or so, roll the dough into two large discs – the exact size will depend on how thin you like your crust. Place them on a baking sheet (if you have a pizza stone, place it in the oven to get hot.) Slice the smoked mozzarella and divide it between the two pizzas, leaving a gap around the edges. Add the mushrooms, then the sausage, torn into small pieces, tucking it among the mushrooms and cheese. Trickle a little olive oil over the top.

Bake the pizzas for 15 minutes or so, until the sausages are golden, the cheese melted and base and edges crisp. Eat immediately. 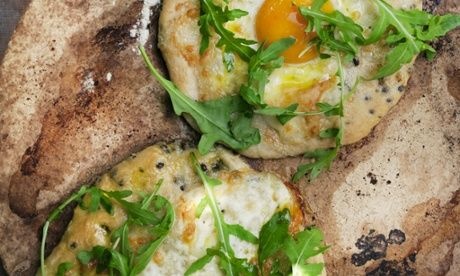 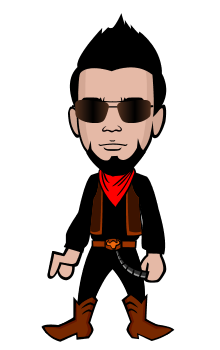 Here is a short and simple method to baking hot wings and bbq wings. Please bear in mind that winget…

Can I add Blog Link?

Hi! I am a newbie at Bitlanders. I just want to know whether I can write a short summary of my recip…