Now I can see 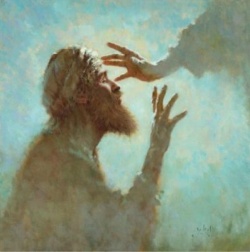 TODAY’S WORD
One time, Jesus healed a blind man, and the religious crowd got upset. They started arguing over why he was healed, how he was healed, and who was to blame for him being blind in the first place! They were hounding the man with questions. Finally, the man said, “Listen, guys. You all are confusing me. I can’t answer all of your questions. All I can tell you is this: I was blind, but now I can see.” He was saying, in effect, the proof of the pudding is in the eating! He was saying, “You can argue all day long, but I know the reason I can see is because of God’s healing in my life.”

There are people today who don’t think you are supposed to be blessed. They don’t think that God wants people to prosper and live in victory. But it’s too late because we’ve already experienced His blessing. He’s already opened up supernatural doors! We’ve seen His favor! Don’t let the naysayers talk you out of your blessing. Don’t let them convince you that God’s Word isn’t true. He’s already done so much in your past, and He’ll do more in your future. Keep standing, keep believing and keep hoping. Soon you’ll see His blessing in every area of your life!

A PRAYER FOR TODAY
Father in heaven, thank You for opening the eyes of my heart so that I can, first of all, see You and then see every good thing You have in store for me. I look to You with an attitude of faith and expectancy and believe that You are at work in me in Jesus’ name! Amen.

Braille is the alphabet for blind person.we can read by dots e.g

Interesting News You need to Know

Image Credit: Pinterest Via Pinterest.com As, I am fond of reading news and mostly about technology,…

Did anyone else see this in the backround?