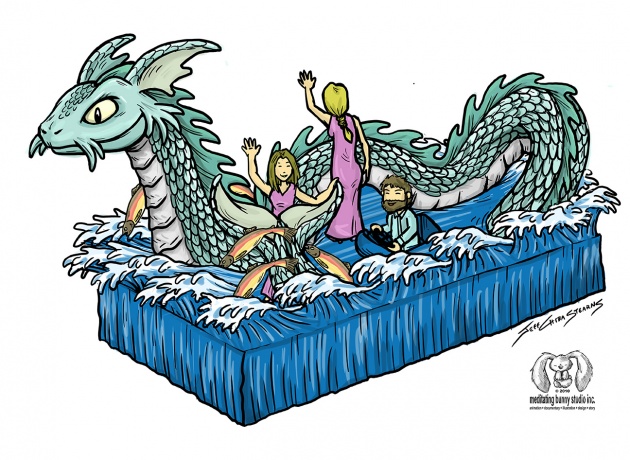 A week ago I posted a blog post about designing the City of Kelowna's new parade float. Even thought I'm Canadian, I have a lot of American friends who are celebrating the 4th of July today.  Therefore, there's a ton of parades happening all around the US right now!  So today, I thought I'd follow up my last blog post by sharing my original 2010 artist statement for designing the Ogopogo float. Just a recap, the Ogopogo is the mythical lake monster living in Kelowna's Okanagan Lake.  It kind of looks like a sea serpent. 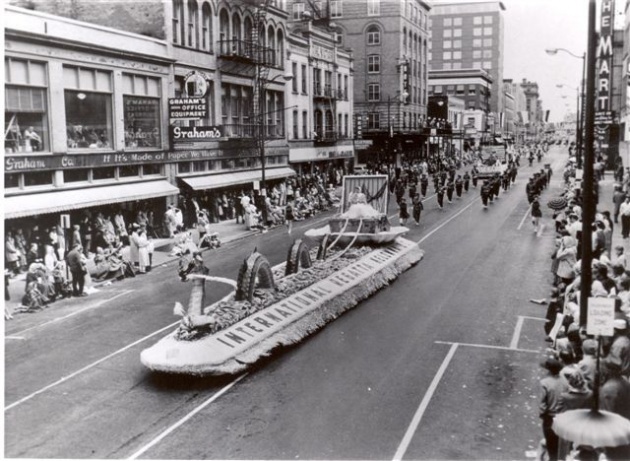 (Here's an old photo of a previous City of Kelowna Ogopogo float.  I think this one was from back in the 1940's)

It was important for the redesign of the Ogopogo to have an updated look that will appeal to all ages.  Thus, there had to be a ‘coolness’ factor, so when the kids, teenagers, and adults saw the float coming down the road it would make them excited.

Therefore, I wanted to create an Ogopogo that was hip, sleek, elegant, beautiful, and full of imagination.  To achieve these qualities, I made sure there were a lot of sweeping ‘S’ and ‘C’ curves and flow through the body. I stayed away from an overly cartoony Ogopogo design and went for a design that had a more mature animated quality and movement.  I created a design that was not too scary for kids or childish.  I wanted to move away from the symmetric humps in which the Ogopogo is often depicted as having and create a hump style design that encompassed the entire float and became and integral part of the float. I gave the Ogopogo large curious eyes to give the design the appeal of friendliness and cuteness. 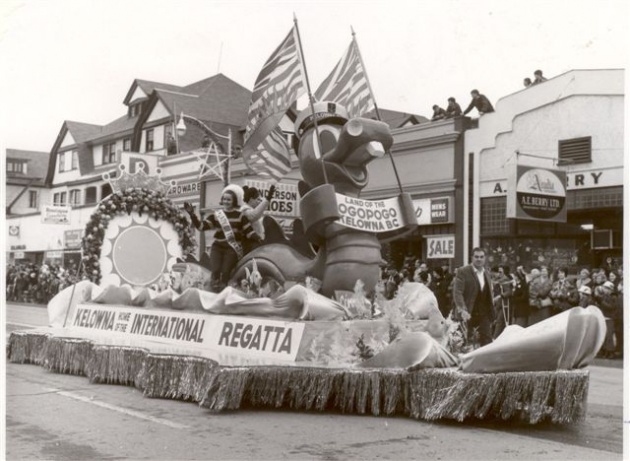 It was also important to capture some of the traditional folklore associated with the Ogopogo.  The popular image of the sea serpent was important to capture in the design but also other aspects like the moose like antlers and horse style head were mentioned in the old First Nations myths.  Therefore, I created elements like the ears to resemble moose antlers and the long flowing wavelike spines to resemble the mane of the horse.  The anatomy of how the head transitions into the neck of the Ogopogo is also based on a horse. I also gave the Ogopogo the wiskers and forked tail of a sturgeon, as many believe that is really what Ogopogo is based on. 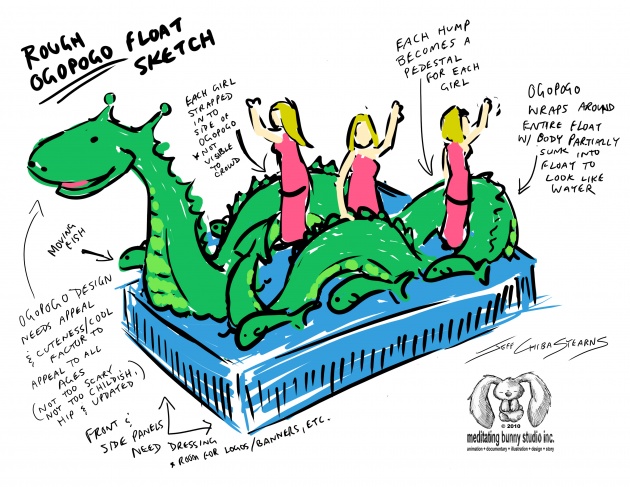 With the float, I wanted to keep it simple and non-cluttered. Therefore, the main focal point of the float is the Ogopogo moving through the waters of Okanagan Lake. Every sighting of the Ogopogo talks about the waves created by the creature.  I wanted to encompass that by creating stylistic white capped waves jutting up off the Ogopogo’s moving body.  I’m trying to capture the Ogopogo in motion through a still sculpture.  I was born and raised in Kelowna and ever since I was a child, I associated the magic and wonder of this city with the Ogopogo living in the depths of Okangan Lake. The sun, mountains, and orchards are not what make this city unique and other cities can lay claim to those attributes as well.  The Ogopogo is a true legend that makes our region the only place in the world that can lay claim to the Ogopogo living in its lake. 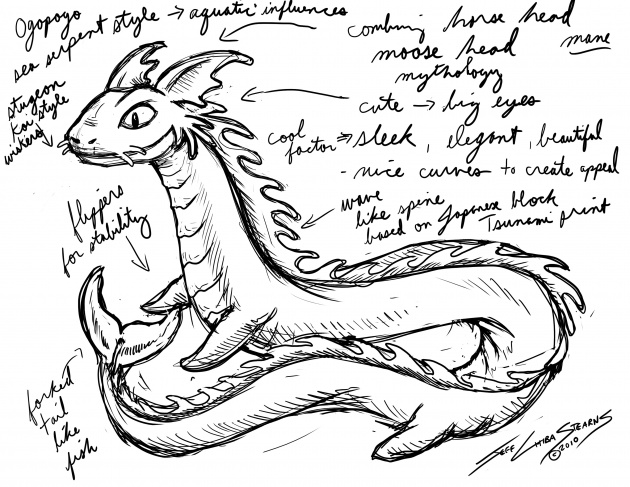 In adding the other elements of the float, I wanted to position the women on either side of the float and use the Ogopogo as pedestals for the women to stand behind.   The women are also able to harness themselves to the Ogopogo to for safety and it is hidden to the people watching from the sides of the street.  The driver is positioned in the middle of the float with direct sight lines to the front, left, and right, as well as the back through the Ogopogos hump. The tail is moved to the front of the float with the neck and head in order for guests to stand and take their photos with the float.  As well, the colourful fish are Rainbow Trout, native to Lake Okangan, and the mechanical animation of the fish on the float will create the illusion that the fish are jumping in and out of the wake of the waves created by the Ogopogo.

The Ogopogo head and neck tower 12 feet in height, making the float truly eye-catching, and is sure to be a favorite float at all the parades it participates in.  I am assured that this float will appeal to all audiences and will be the most talked about float in any parade. I am proud as a Kelowna born and raised artist to have a chance to create a float that I believe will make my city proud. 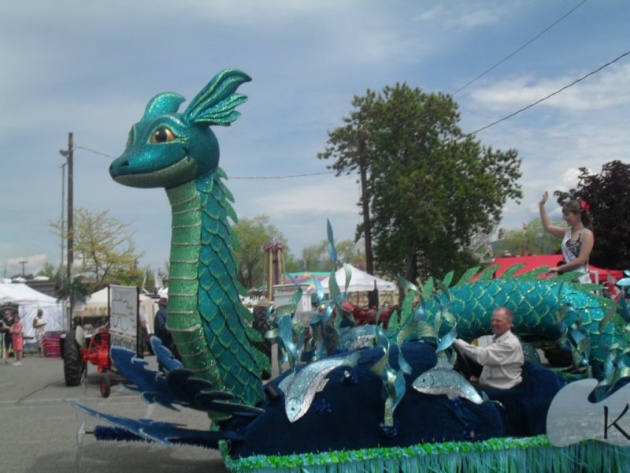 (The Ogopogo final float based on my original designs)

Thanks for reading and please BUZZ this post and subscribe for more updates on new videos and blog posts!  Thanks!