Photos From a Nazi Christmas Party

Pictures, by Adolf Hitler's personal photographer, from a Christmas party thrown by Hitler for high-ranking members of the Nazi Party. 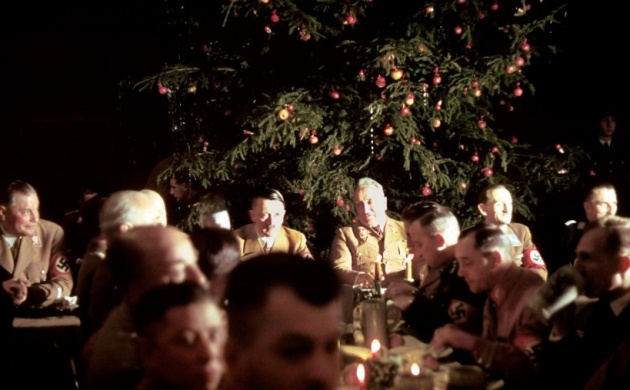 The images are chilling, bordering on surreal: Surrounded by fellow Nazis, Adolf Hitler presides over a Christmas party. Swastika armbands jarringly offset the glint of ornaments and tinsel; candles illuminate the festive scene. Confronted with the scene, a viewer might reasonably ask: How could Nazi leaders reconcile an ideology of hatred and conquest with the joyous spirit of the holiday — much less its celebration of the birth of the Jewish Christ?

We cannot accept that a German Christmas tree has anything to do with a crib in a manger in Bethlehem. It is inconceivable for us that Christmas and all its deep soulful content is the product of an oriental religion.

Those were words of Nazi propagandist Friedrich Rehm in 1937, arguing that “real” Germans should remove any vestiges of “oriental” religion from the holiday by harking back to the pagan Yule, an ancient Northern European festival of the winter solstice. (An eye-opening 2009 exhibit at Cologne’s National Socialism Documentation Centre featured early Nazi propaganda attempts to make over the holiday: swastika-shaped cookie-cutters; sunburst tree-toppers, to replace the traditional ornament Nazis feared looked too much like the Star of David; rewritten lyrics to carols that excised all references to Christ.)

But by the time Hitler, Mussolini and the Japanese had dragged the Allies into the Second World War, the Reich’s focus had shifted to more practical matters. Rather than trying to dissuade millions of Germans from celebrating Christmas the way they had for generations, Hitler, Goebbels and the rest instead encouraged their compatriots to send cards and care packages to the troops.

[See more photos by Hitler’s personal photographer, Hugo Jaeger, in the gallery, “The Brink of Oblivion: Inside Nazi-Occupied Poland, 1939-1940″]

As for the religious views of Hitler himself, the evidence is hardly conclusive: In public statements he sometimes praised Christianity (once calling it “the foundation of our national morality”), but in private conversations — including one recalled by the Third Reich’s official architect, Albert Speer — the Führer is said to have abhorred the faith for what he deemed its “meekness and flabbiness.”

Hitler did, of course, fervently worship one thing above all else: the so-called Aryan race. Looking at the utterly banal, ordinary faces and figures in these photographs, however, it’s hard to believe thatanyone, no matter how fanatical or deluded, could believe that the men at that long-ago holiday party comprised anything more than a roomful of gangsters and common thugs.