Pictures Men Are Completely Confused By But Women Aren’t

Men will never understand the hardships of a woman’s life. Periods, hormone headaches, losing hair ties, breaking a nail, constantly being hit on simply for having a pair of tits, dryness during sex, and various other horrors women are forced to survive will never make sense in the mind of a man, simply because he will never have to go through it. It’s rather unfair, actually. Check out these pictures that totally confuse men but women completely understand, thanks to their rough lives. Don’t feel bad about not being able to understand them, fellas. It’s not your fault. It’s genetics and there’s nothing you can do about it. 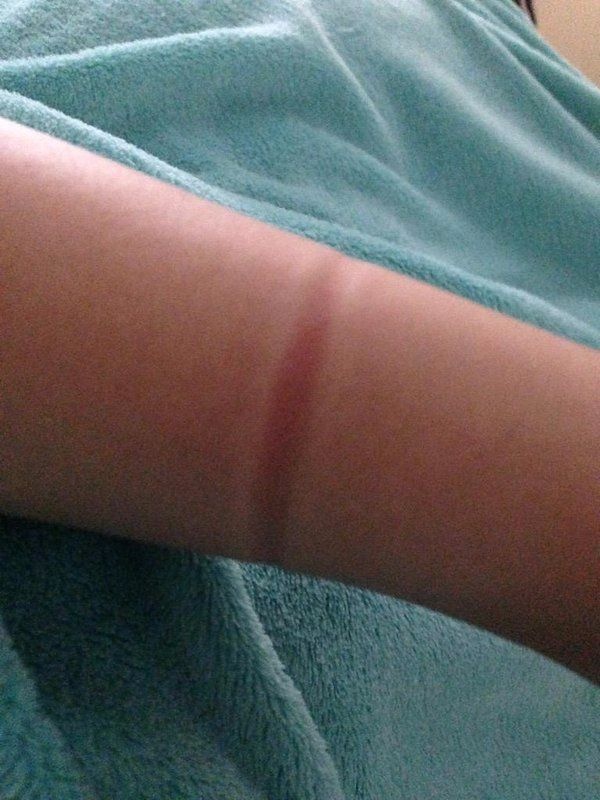 To a man, this might look like some sort of odd cut or a banded burn, but a woman knows exactly what it is. It’s a hair tie mark, given by those evil things that constantly like to attempt to remove their circulation on their arms as a way to try to kill them. It’s hard being a female. You gotta carry them around, but doing so on your wrist is both painful and annoying. And to you guys who say women don’t need to carry them around on their wrists need to remember that during an intense blow job, sometimes a hair tie is needed to keep her long locks out of the way and of course it’s needed fast so the blowing isn’t interrupted. It’s easy access on the wrist. Did that help put it in perspective for you? 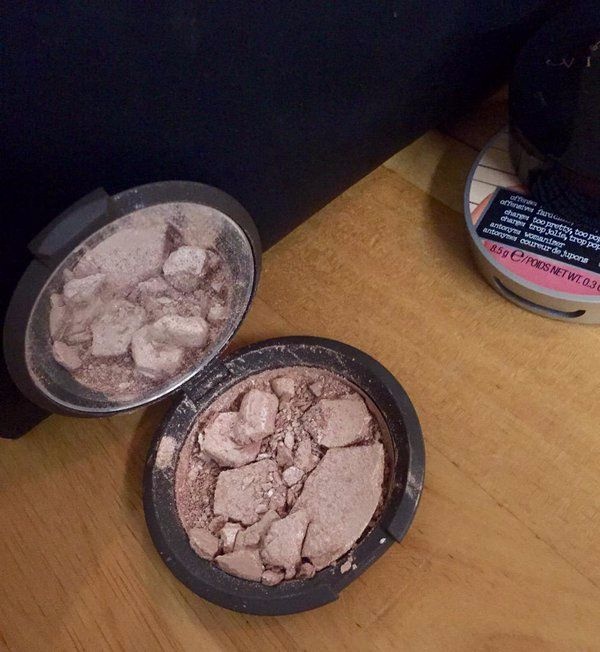 To a guy, this picture looks like a broken round crayon. He’d probably wonder why the f*ck women are carrying them around with them everywhere they go. To a woman, this picture looks like heartbreak. Good makeup is not only hard to come by, but it’s really expensive. When it breaks, so does a woman’s heart. It will never be the same. While guys think women don’t need makeup, it’s important to remember that the “natural” look isn’t actually natural. Unless you want your girlfriend to look like a troll 24/7, you need to understand that she does indeed need that expensive makeup. 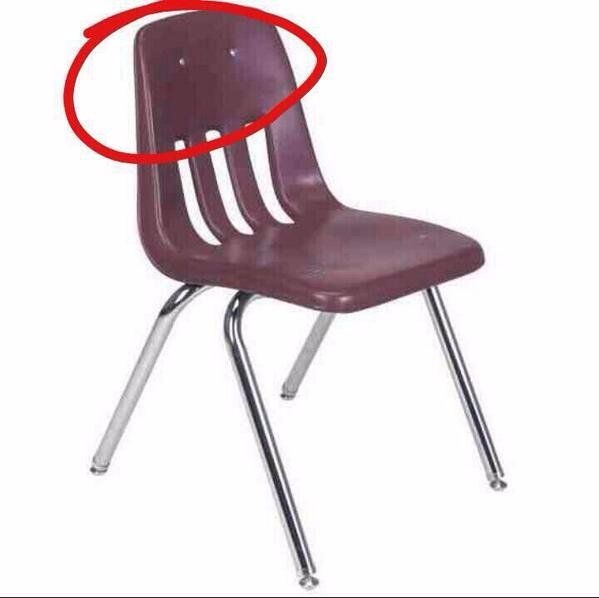 Men see this as a simple chair. A nice place to sit. Women, on the other hand, see it as a torture device. Anyone with long hair will realize very quickly that those suckers pull in the little strands, breaking them one by one as females sit in horror knowing their hair will never be the same. Guys might say a girl should cut her hair if it’s a big problem, but when will you pull during sex if that’s the case? Bet you didn’t think about that. 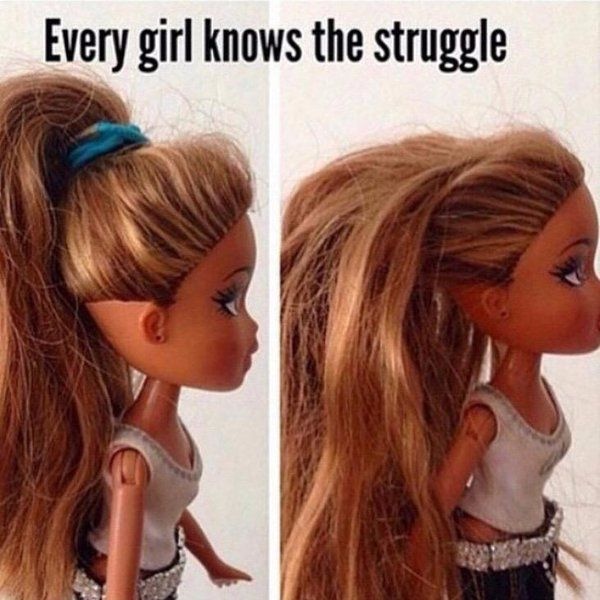 As a female, keeping your hair pretty is a constant battle. Sure, it’s simple to throw it up into a ponytail, but it isn’t so simple when you want to take it out in public. Of course, guys see this picture as completely normal because they don’t give a f*ck if their hair is a little off. They will never understand the pain of beauty. And man, is it awful. 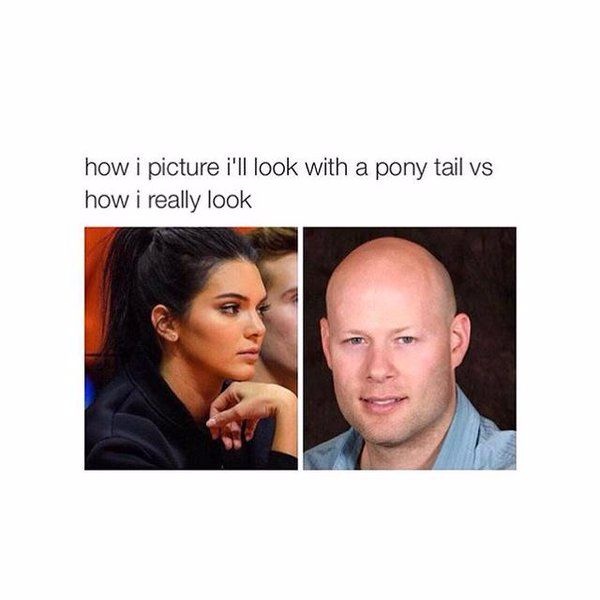 Wearing a ponytail looks sexy on the stars, but the average women looks like a man when she throws her hair back. It simply isn’t fair. But because guys always look like guys, they wouldn’t understand this dilemma. Guys barely even look in the mirror before they go out, so they’re not paying attention to see if they have lumps or bumps in their hair, simply because they don’t care. 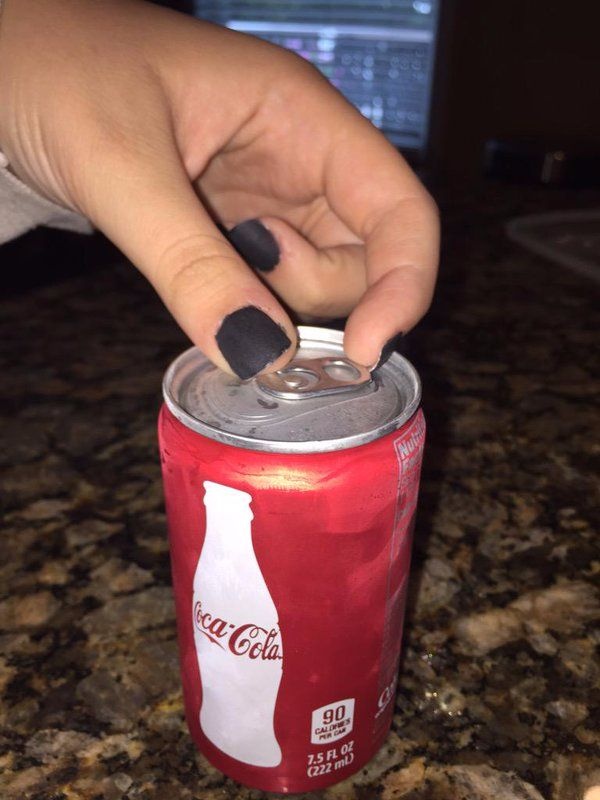 To a man, this looks like someone opening a soda. No pressure, no big deal. But, females understand that it’s the moment of truth. A simple task like this is a huge one with long, freshly painted nails. Breaking a nail is no fun, not to mention it’s really painful. Guys won’t ever get it. Their dirt filled nails will never be subject to the kind of pressure women’s go through to look beautiful constantly. 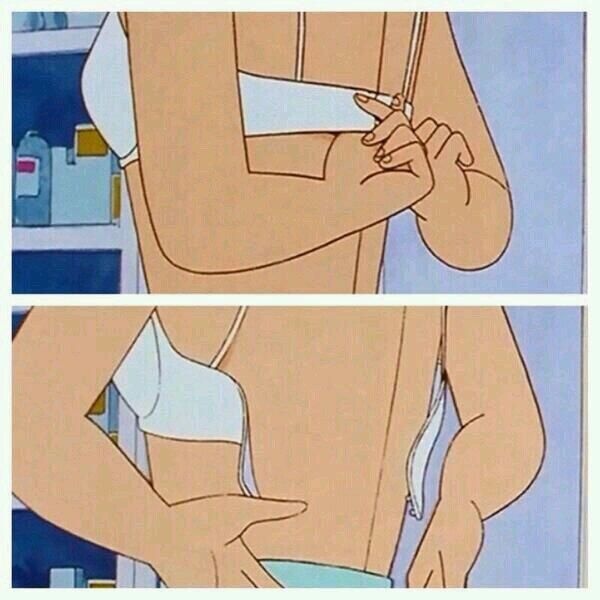 To a guy, this looks like sexy time is about to happen. To a female, it looks like instant relief. There’s no better feeling that taking the pressure of a tight bra off. It’s like walking around in boxers for guys, feeling the breeze on the sensitive parts of the body. It’s a beautiful thing, really. 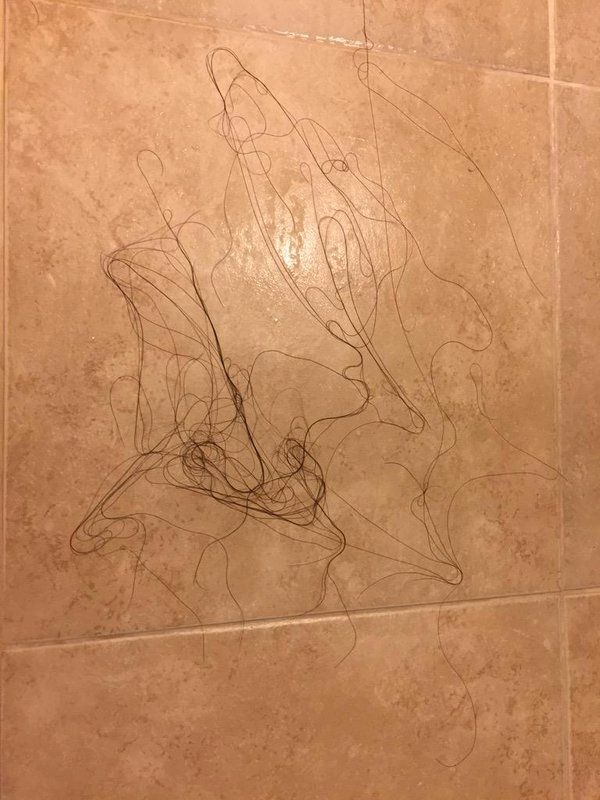 Guys see disgusting wads of hair, while women see the fear of being bald soon. Either way, it’s a terrifying view for both genders. 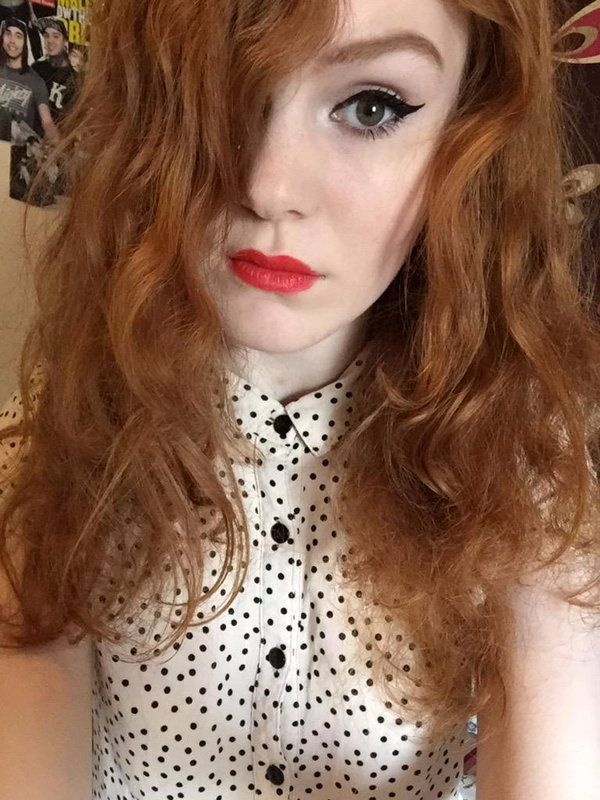 Guys see a beautiful girl. Girls see a girl hiding the uneven eyeliner being hidden. Someone isn’t as sneaky as she thinks!

10. Not Wanting to Smudge Eye Makeup 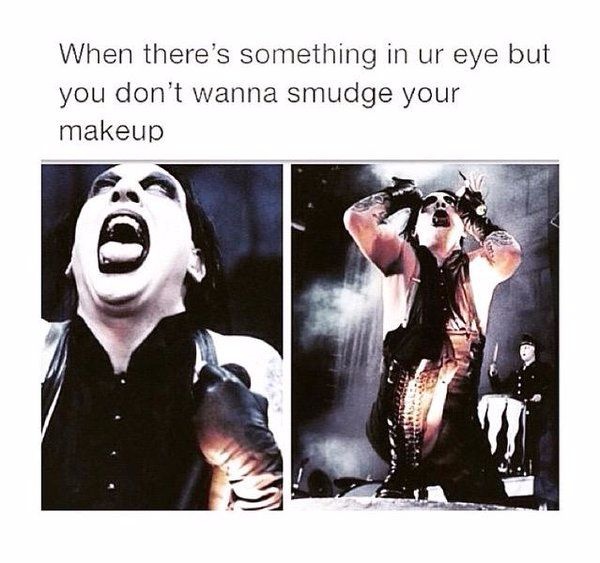 Guys get to willy nilly rub their eyes whenever they want to with no consequences, so of course they wouldn’t appreciate this picture. When a woman gets something in her eyes, she can’t do a damn thing about it unless she wants to rub away her precious eye makeup masterpiece and risk ending up like a raccoon. It really is rather unfair. 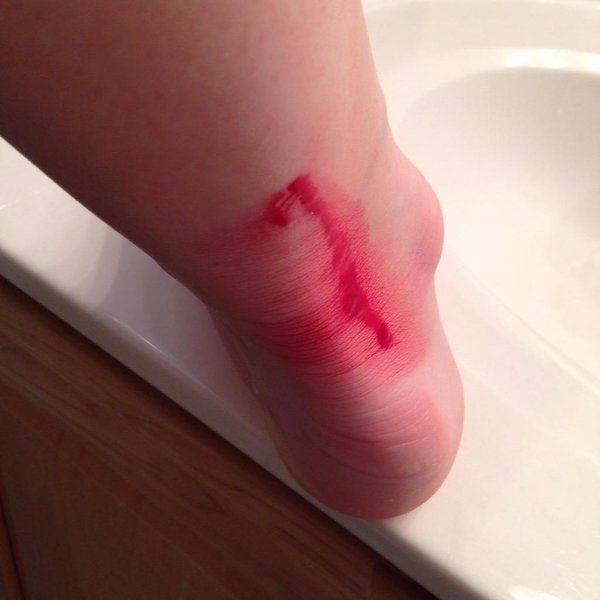 To a guy this looks like a painless cut that means absolutely nothing. To a woman, it looks like damn near the end of the world. Shaving cuts hurt worst than most other cuts and guys will never really understand the pain of hooking that sharp edge on their heels or knees. It’s god awful horror. 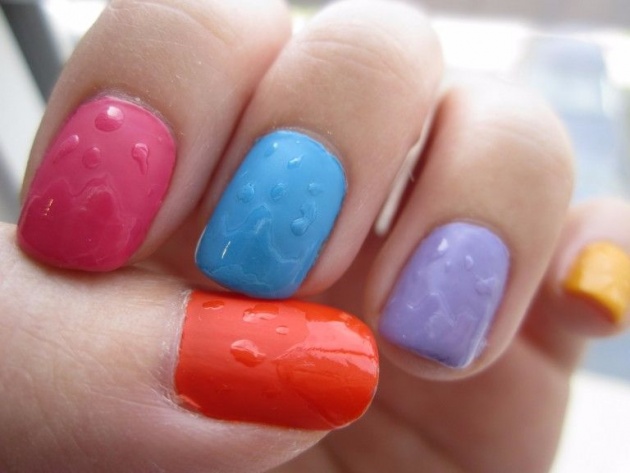 Having freshly painted nails is the worst thing in a woman’s world. She can barely move. Guys see some pretty colors, while girls see the inability to do anything. If a female has to suddenly pee, there’s not a damn thing she can do about it. She has to wait until her precious nails are dry. If she has to scratch her nose, she’s got to wait too. There’s just about nothing she can do while those suckers are drying. It’s really rather horrible. 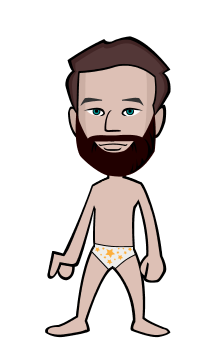