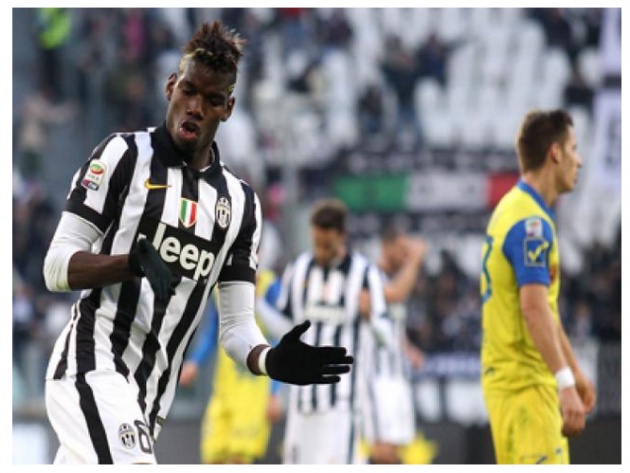 Paul Pogba hit his fourth goal in as many games to inspire Juventus to a 2-0 win over Chievo as the Serie A champions moved eight points clear of Roma on Sunday.

Roma face a resurgent Fiorentina in Florence later on Sunday looking to reduce the gap to five points.

Juventus's hopes of a fourth consecutive scudetto were given a huge boost last week when Roma suffered a second successive draw.

But Massimiliano Allegri's men had Pogba to thank for ending their frustrating search for goals in an entertaining encounter in Turin, where a stubborn Chievo kept the scoresheet clean until Pogba broke the deadlock on the hour.

In the opening half Carlos Tevez, Alvaro Morata and Arturo Vidal all spurned chances to break the deadlock against Rolando Maran's well-organised visitors.

Juve continued to dominate after the restart and Claudio Marchisio went close with a bouncing shot from outside the area.

Bizzarri was finally beaten by a piece of Pogba magic, the Frenchman taking Tevez's short pass and nutmegging one Chievo player before unleashing a dipping shot with his left foot that beat the 'keeper at his near post.

It was Pogba's fourth consecutive goal in as many games, having also scored one in one in Juve's 6-1 Italian Cup last 16 drubbing of Verona last week.

Three minutes later Bizzarri did well to block Pogba's control and volley in the area but Stephan Lichsteiner rushed in to bundle the ball home and all but wrap up the points for the defending champions.

Juventus's 15th win of the campaign sees them on 49 points, eight ahead of Roma and 15 in front of third-placed Lazio, who outclassed a sorry AC Milan side 3-1 late on Saturday.

Coach Massimiliano Allegri insisted a fourth consecutive league title is a long way off, but praised his side's composure.

"There are still a lot of games to play before we can talk about the title," Allegri told Radio Rai.

"Hats-off to the lads because they stayed patient against a Chievo side that were on a par with us throughout the opening half.

"Then we upped our game a little and they didn't follow. It wasn't an easy win but we needed to earn three points like this because recently we've been used to sealing our wins earlier on."

Napoli, in fifth a point further adrift, can reclaim third place with a win at home to Genoa on Monday.

Inter Milan had been looking to capitalise on their city rivals' misfortunes to steal a march in what is shaping up to be a tight race for the third and last Champions League qualifying spot.

But Roberto Mancini's men failed to capitalise on their few real chances and were stunned in the last minute of added time when Emiliano Moretti stooped low to beat Samir Handanovic with a low header after Maxi Lopez had headed a corner towards goal.

It was Torino's first win over Inter at the San Siro since 1988 and handed Inter their third defeat in eight games, since Mancini took over at the end of November.

"Conceding a goal like that in the last minute hurts," Mancini told Sky Sport.

"But we can't drop our heads. I believe we're on the right road. Now we just have to roll up the sleeves and get down to work."

Inter are one place above Milan but both Milan giants are eight points off Lazio and Sampdoria. Torino's sixth win of the campaign moved Giampiero Ventura's side up one place to 12th, just one point further adrift.

Elsewhere, hosts Parma suffered another blow in their bid to beat the drop after conceding late on as fellow strugglers Cesena ran out 2-1 winners at the Ennio Tardino stadium.

However the hosts were stunned a minute from time when Spanish striker Alejandro Rodriguez struck for the visitors.