Radio; from establishment up to fall of Taliban (3nd part)

At the time of Dawood Khan, Radio Afghanistan had 20 hours and 30 minutes broadcasting; but it is mentionable that Press Freedom annihilated and once again Dictatorship system of Press has imposed.  At this time Radio Afghanistan was following government policies and broadcasts statements, information, news concerning government and entertainment and educational programs.

After 7th Sawr (Solar month), 1357 Solar uprising and with coming of Communistic system of government, radio programs expanded inside and outside country.

At this period, radio programs were particularly assigned for broadcasting news, statements of “Khalq and Parcham” parties’ leaders, information and party meeting reports.

Radios programs have been developing day by day; but after conquer of Kabul by Mujahedin on 6th Sawr, 1371 Solar, this improvement has stopped. At this time Radio Afghanistan faced with luck of technical staffs and new staffs that rather consist of Mujahidin couldn’t provide appropriate programs for new Mujahidin’s government as well as beside this there were conflicts between Mujahidin’s group in terms of broadcasting radio programs and because of this at this period radio programs were too week and non standard . 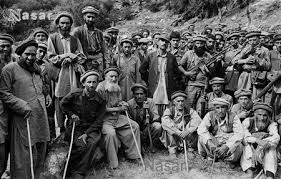 Along with possession of Kabul- Afghanistan’s capital- on 4th Mizaan (Solar month), 1375 Solar, by Taliban, Islamic Emirates of Taliban established.

News paper activities have settled under observation of Ministry of Information and Culture and Private Print Medias- that had growth at the time of Mujahidin- were avoided from activity. Television broadcasting has suspended and Radio Afghanistan’s name has changed to “Radio Shariyat-e- Islami” which had two turns of broadcasting: one time in morning and another in the nigh along with few programs.