This time i am going to talk about the resignations of PTI(Pakistan Tehreek Insaf) members.

ISLAMABAD: The central information secretary of Pakistan Tehreek-i-Insaf (PTI), Dr Shireen Mazari has said that his party members will appear before the Speaker of the National Assembly, on October 29 for the verification of their resignations.

Talking to journalists after the meeting PTIs core committee, Dr Shireen Mazari said that his party is firm on its position regarding the resignations of its members and the PTI representatives will appear before the Speaker NA, Sardar Ayaz Sadiq on October 29 for the confirmation of their resignations. 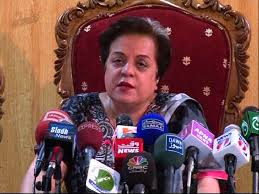 She told that PTI will not contest the any of the by-elections in the country from now on, however the party will assess which of the independent candidates is to be supported and the decision will be varying from case to case.Mazari said, “We want to change the current system of the country and that a new life will be blown into the sit-ins on November 30″.

Criticizing the JUIF chief for his statements, the PTI information secretary said that Maulana Fazlur Rahman uttered shameful words about women at PTI public gatherings.However, it is yet to be seen whether this change of strategy by the defiant Tehreek-i-Insaf would prove to be fruitful in making the prime minister step down, or not.