Rules-based cinema: OUIJA – not the worst film adaptation of a board game that I have seen 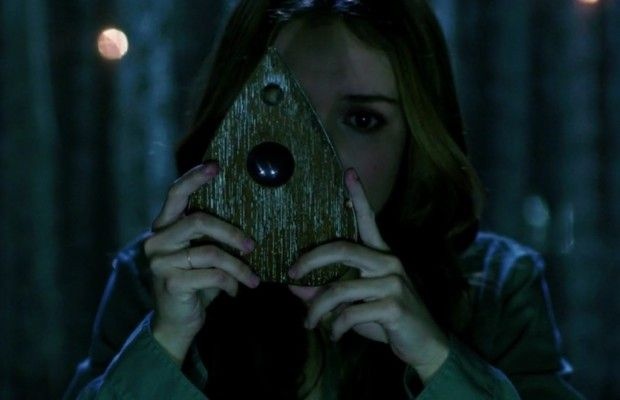 OUIJA follows in the footsteps of other board games that have been adapted for the silver screen. CLUE is the one everybody remembers, but there is also MOUSE HUNT loosely based on ‘Mouse Trap’ and (at a stretch) SNAKES AND LADDERS ON A PLANE. These films follow rules that vary from adaptation to adaptation. Here are OUIJA’s rules following the template of the teen horror flick.

Offer up a sacrificial victim. Introduce a character who messes with something they shouldn’t play with, in this case, an Ouija board used for communicating with the dead. Not just any dead but those who are trying to find the bathroom, leave the house or whatever. The victim will think they are getting rid of that sacred object that they shouldn’t have touched, even if it got no takers on eBay. They are wrong. Before long, they will lose conventional sight and make creative use of Christmas lights before being found dead the next day. Gratuitous death scenes may vary.

Three into two won’t go. The standard number of characters for a teen horror film such as OUIJA is five. The best friend of the victim is the investigator, pulling along her friend and her kid sister. Then there are two guys – the heroine’s boyfriend and the lover of the victim. As we know from other horror films with three of one gender and two of the other, three into two doesn’t go. The role of the ‘threat’ is to simplify the numbers.

Repeat the mistake of the first character. If one character plays with a sacred object and pays the price, chances are another character is going to do the same and rope in four others. They are going to be cursed, I tell you, cursed!

Everyone gets the same message – that’s how we know something’s wrong. It’s not just dubious loan companies who spam, the undead do it as well; in OUIJA’s case, each character gets the message ‘Hi Friend’ because the undead don’t do emoticons. As for text speak – forget it. The message will appear to all the cursed ones, sometimes written, or scratched or on a word document in 48 font. Be afraid!

Girls die before boys. Well, not always, but one member of the dominant gender in a film will always die first to even up the numbers. Then the survivors will feel cursed.

The spirit is never who you think it is. As in cyberspace, you might think you are talking to your best friend, but in fact the person responding to your messages is a total creep, who plays on the fact they have the same initial. There is no ‘block caller’ on an Ouija board.

There is no such thing as a vengeful spirit. Spirits don’t really want revenge. Most of them don’t have career goals. They are aggrieved and denounce the system but they are not particular about whose butt they kick. They tend to just lash out.

Don’t trust old ladies in care homes. I’m not sure this is a rule, more a guideline.

When the sound goes off, prepare for a fright. One easy way to generate suspense is to cut the sound. Then you wonder when it will be turned back on. Kind of reverse musical chairs.

The virtuous survive. If you are watching a Hollywood film, this is not a shock.

Horror films don’t ruin careers. Horror films present actors ‘before they were famous’. Johnny Depp and Kevin Bacon are just two actors knocked off in genre films who went on to have productive careers in the mainstream.

Don’t confuse these movies with classics. See THE BABADOOK and you’ll know what a character-based psychological horror film is like.