20 years after director Steven Spielberg’s Jurassic Park broke all kinds of records, this April the new movie version is out in 3D and doing well. Dinosaurs have qualities irresistable to the human imagination; power, speed, and dominance - all perfect for the science fiction film genre.

Dinosaurs lived 230 million years ago, when all earth’s continents were still connected. The dinosaur reign was incredibly long and lasted 165 million years. Then they all suddenly went extinct 65 million years ago. They were lost forever. This mass extinction was long before our species, homo sapiens appeared on earth - part of why the Jurassic Park story of resurection from master storyteller Michael Crichton is so fascinating. The 3D movie is visually stunning and the sound is gut wrenching.

Scientists know from real fossils that dinosaurs ranged from bird-sized all the way up to ginormous - 60 feet long and 36 feet tall. Based on fossil footprints, Tyrannosaurus could run almost 27 miles per hour, and I certainly cannot. While many of the dinosaurs were vegetarians enjoying pine, cycads, redwoods and ginkgo, this is not true of the Tyrannosaurus. The meat eaters like Tyrannosaurus did eat other dinosaurs, and probably ate the earliest known mammals too, like tree shrews. If humans were around back then, it seems likely the dinosaurs would have eaten us, too.

What happened to this dominant and diverse group of animals is debatable. The following theories about the mass extinction may sound familiar: climate change, sea-level change, low reproduction rates, or a mysterious poison gas. My favorite possibility is that a comet struck earth, because that seems less likely in the coming years than climate change and floods do. 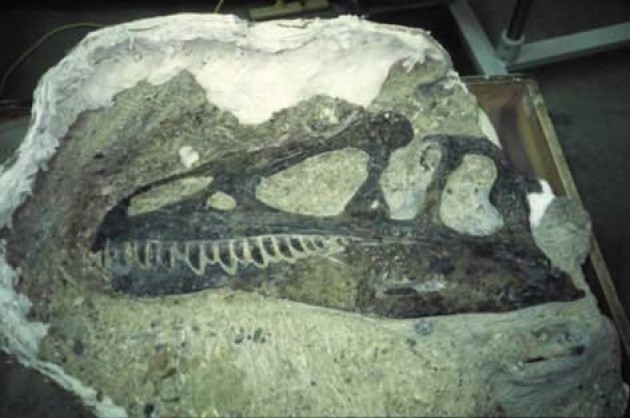 Although they are now extinct, something about the dinosaurs’ tragedy reminds us of ourselves. Extinctions are galloping at more than 10,000 species lost each year, yet we are hoping our species, homo sapiens, won’t be the next in line.

If we could bring back dinosaurs by cloning, would we want to? The Tasmanian Tiger is not the only animal in the sights of scientists who would side-step the thorny issue of mass extinctions by artificial cloning in the lab. Wooly mammoths and Neanderthals are potential targets of resurrection or de-extinction that are recently in the news. The Lazarus Project had success with cloning live cells, but not yet full individuals, from the frozen cells of a recently extinct frog species. This suggests feasibilty of the plan. Are dinosaurs next?

So far, scientists have cloned sheep, cattle, cat, deer, dog, horse, mule, ox, rabbit and rats not from extinct species but from living cells. The costs of this kind of cloning are high and the success rates are very low. What’s more, thousands of individuals are required in order for a species to succeed. And so for now, cloning of dinosaurs is likely to stay within the realm of fiction and awesome fantasies in film and entertainment, like Jurassic Park.

What did you think of Jurassic Park?

Is the 3d version of the movie more impressive?

If scientists could clone dinosaurs, would you want us to?

You may also be interested in: Science in Film: Cloning our Future Now and