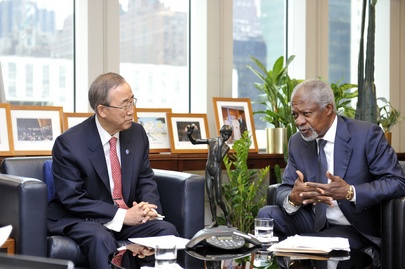 Best possible now is a rather vaguely worded “Presidential Statement” by UNSC rhetorically endorsing the Koffi Annan Mission as “Joint Special Envoy” of UN and Arab League. The Moroccan proposed Draft Resolution apparently is still not acceptable to Russia and perhaps China. However, even the “Presidential Statement” appears to be still under negotiation, and Russia wants at least some statement, even if separate on recent bombing – “terror” attacks – in Damascus and Aleppo. This has meant a significant watering down of expectations and demands upon the Assad Regime. The ICRC, (Red Cross/Crescent) has now looked to just gain a couple of hours cease fire each day to evacuate wounded between the opposition Free Syria Army and Assad’s Security/Military forces. Translation into real life terms is consistent with our more worse case scenario analysis: ---- The Syria crisis is becoming institutionalized and the Annan Mission is becoming the mechanism – See our Previous Blog for Video – “Institutionalizing Syria Conflict ala Bosnia” - diplomaticallyincorrect.org/films/blog_post/institutionalizing-syria-conflict-ala-bosnia/47700 ---- Kofi Annan’s Mission is meandering at best and being exploited by Assad as Diplomatic Cover to finish the job of crushing the Opposition – See our Previous Video for Blog – “Kofi Annan Optimistic, but Too Patient?” - diplomaticallyincorrect.org/films/blog_post/kofi-annan-optimistic-but-too-patient/47716 ---- Kofi Annan’s Mission is providing cover for Russia which continues to arm Assad Regime but also “Friends of Syria” who can claim that they are all waiting for Annan, but in reality have no desire to pursue any action even as they could now, particularly neighboring countries on basis of “Regional Organizations” without UNSC Resolution. The humanitarian as well as military/political situation will become only more dire. Assad may eventually agree on paper to some UN led humanitarian mission, but will use that as well as cover to continue his complete anihaliation of dissent. Turkey and the Arab League may have to consider options without the UNSC as Washington is not really of either single mind or willing to undertake minimal military measures. The next Friends of Syria meeting in Turkey will probably the next moment for some decisive action. PM Erdogan’s Government will have pressure build on it to act on the border region – perhaps safe zones. Assad is calculating the same, but this gives another 2 weeks to his Regime with relatively free hand. See our Blog for Video – “Time for Koffi Annan to Change Strategy or End Mission?” - diplomaticallyincorrect.org/films/blog_post/time4-kofi-annan-2change-strategy-or-end-mission/47491 By Ambassador Muhamed Sacirbey – Follow @MuhamedSacirbey Facebook = Become a Fan at “Diplomatically Incorrect” Twitter – Follow us at DiplomaticallyX See more at our Popular Video Blogs & Current News Event Articles at diplomaticallyincorrect.org/c/war-crimes-justice