This past October 1, The Buoniconti Fund held their 28th Annual Sports Legends Dinner at New York's Waldorf Astoria Hotel. The Buoniconti Fund to Cure Paralysis has carried on it's vital work in raising funds to advance research in the field of spinal cord injury since it's founding in 1992. Nick Buoniconti's legendary career as a Hall of Fame linebacker began in the AFL with the Boston Patriots in 1962. A five-time AFL All-Star with the Patriots, he is probably best remembered for his tenure with the Miami Dolphins and the "Undefeated Season" and Super Bowl win in 1972. A graduate of Notre Dame, Buoniconti also earned a law degree from Suffolk University Law School in Boston while playing with the Patriots.

Buoniconti's involvement as an advocate for spinal cord research began in 1985 after his son Marc was severely injured while playing in a college football game for famed South Carolina Military Academy, The Citadel. Marc's injuries left him a quadriplegic. Faced with the grim circumstances of his new reality, Marc and his father initiated their campaign to find a cure for paralysis, co-founding The Miami Project at the University of Miami and then The Buoniconti Fund.

One of the Fund's many events is the highly anticipated Annual Sports Legends Dinner and this year's gala was no exception. A virtual who's who of sports icons turned out to honor 2013 Legends Terry Bradshaw, James Worthy, Dave Winfield, Nick Faldo, Shawn Johnson, Gary Stevens, Antron Brown, Teresa Edwards, Jim Kelly and Kenny Smith.

#InTheLab invites you to enjoy our coverage on the Red Carpet as host Arthur Kade speaks with some of the evening's honorees and attendees as they came out to show their support for this worthwhile cause... 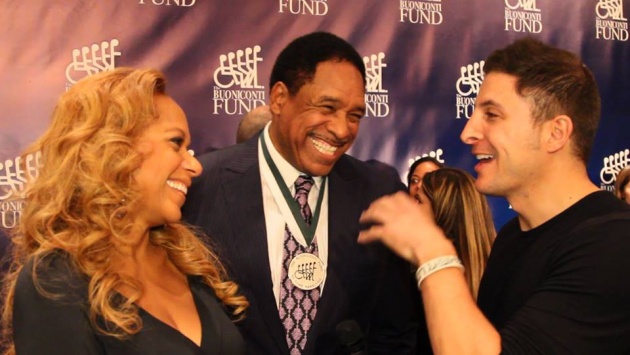 Must have been a photo shoot for something as the power cord is not plugged in.…

One man suffered a head injury and was arrested for affray and carrying a weapon. Police are hunting…