In The Emperor's Blades by Brian Staveley, the emperor of Annur is dead, slain by enemies unknown. His daughter and two sons, scattered across the world, do what they must to stay alive and unmask the assassins. But each of them also has a life-path on which their father set them, destinies entangled with both ancient enemies and inscrutable gods.

Kaden, the heir to the Unhewn Throne, has spent eight years sequestered in a remote mountain monastery, learning the enigmatic discipline of monks devoted to the Blank God. Their rituals hold the key to an ancient power he must master before it's too late.

An ocean away, Valyn endures the brutal training of the Kettral, elite soldiers who fly into battle on gigantic black hawks. But before he can set out to save Kaden, Valyn must survive one horrific final test. 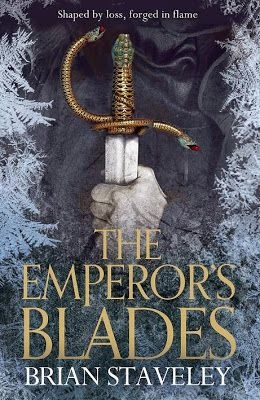 At the heart of the empire, Minister Adare, elevated to her station by one of the emperor's final acts, is determined to prove herself to her people. But Adare also believes she knows who murdered her father, and she will stop at nothing—and risk everything—to see that justice is meted out.

I think Tan’s trying to kill me,” Kaden said, straightening up from the bundle of tiles he had just hoisted up onto the dormitory roof and wiping the sweat from his brow.

Down below, Phirum Prumm was hufﬁng with the effort of muscling the next load into place and hitching it to the rope. Kaden’s back and hands ached from the repetitive labor, but compared with the rigors of Rampuri Tan’s training, retiling the roof after the winter ice damage felt like a holiday. At least he could ﬁnd the occasional moment to straighten from his task and knuckle the sore muscles without getting whipped.

“Quit whining,” Akiil retorted, hunkering down to get a good grip on the tiles, then hauling the whole crate up with a grunt. Kaden had no idea how his friend could work with the mop of black curls hanging down over his eyes—by tradition he should have cropped his scalp like the rest of the monks, but a tradition wasn’t exactly a rule, and Akiil was extremely adept at balancing on the ﬁne line between the two. “The ﬁrst month with a new umial is always the worst. Remember when Robert made me carry those stones for the new goat shed down from the Circuit of Ravens?” He groaned at the memory.

“I don’t think this is so bad,” Pater protested as Akiil dropped the bundle at his feet. The boy perched on the roof’s apex, like a small gargoyle set against the austere background of the snowy peaks beyond. He was barely eight, a novice still, and had yet to experience a truly brutal umial. “Of course you don’t,” Akiil responded, pointing an admonitory ﬁnger at the boy. “While the rest of us are lugging and lifting, all you have to do is sit there!”

“I’m placing them,” Pater protested, his brown eyes round and aggrieved. He held up a loose tile by way of demonstration. 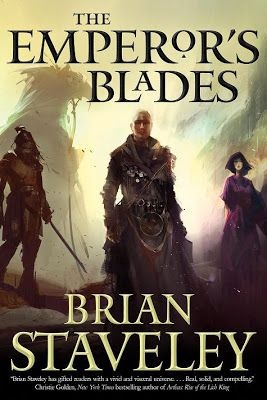 “This is just work,” Kaden pointed out as he wrapped his hands around the thick rope and began to haul. “Since I started with Tan, I haven’t gone a single day without a beating. He’s running out of unbroken skin.”