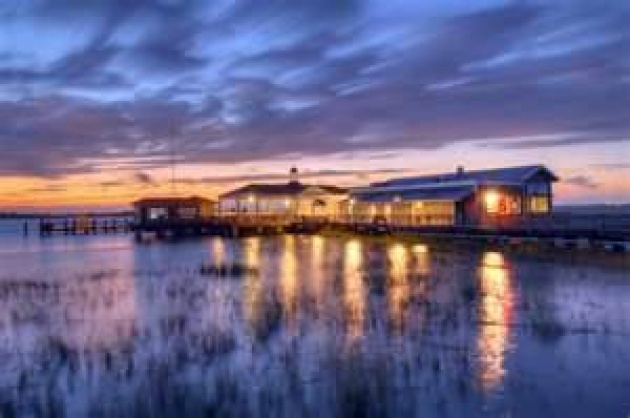 The history of Jekyll Island, Georgia is a fascinating one ...

It's allure once had it at the top of the heap of vacation getaways, but that is long forgotten in today's world.  So, I plan to remind the readers of this blog how it all started and became known as a beautiful southern coastal escape.  Jekyll is one of Georgia's 'barrier' islands along with others like Cumberland and St. Simon's, and Sea Island.  Cumberland is it's neighbor and belonged to Andrew Carnegie and his family, more famous in recent times for quietly hosting the late JFK Jr.'s wedding to Carolyn Bessett in the early 1990's.

Through the centuries Jekyll was visited by local indians and regarded as a great place where hunting and fishing were plentiful.  It's recorded history begins with the Spaniards settling in St. Augustine, Florida in 1565, when Ponce de Leon explored the southern coastal region of America and staked his claim for Spain.  On the way to St. Augustine, he passed these beautiful 'barrier islands' off the coast of what is now Georgia, and noted them on his maps.  When he arrived in St. Augustine, he built a fort that still stands today and a town that is considered the oldest in America (also home to the Fountain of Youth! lol).  He never forgot the islands just up the coast and soon thereafter Spanish settlements were formed.  But by 1720's the English were fighting with the Spanish over land and colonies here, and by 1736 Jekyll Island was formerly declared British and granted to Sir Joseph Jekyll, Commander of the fleet in the area, whose name it bears.  The Spanish burned all the buildings before leaving Jekyll, and the oldest standing structure left is Horton House, which belonged to the British Major William Horton, and was built during this period.  Over the next hundred years the island's ownership changed hands from Jekyll's descendants until the early 1820's when the Dubignon family purchased it.  They were of French descent and nutured and farmed the land and built a business renting out cottages as retreats on the island.

In 1880, a group of wealthy investors bought the land that is now the Jekyll Island Club from the Dubignon family, and though Jekyll was already on the map, it was now on the well-to-do's 'radar' as an exquisite and exotic island getaway, complete with white sandy beaches and dunes.  Activities were swimming, riding, sailing, croquet, golf,and tennis.  If you wanted to mingle with Rockefellers, Vanderbilts, Morgans, and Astors you had to be there. Before Palm Beach, Florida became the choice spot of the rich and famous it was The Jekyll Island Club!  Today's clubhouse was built in 1880, and restored and renovated several times over the last century.  It is surrounded by four large apartments that at one point belonged to four of its most prominent members.  Frederick Bourne, a member since 1900 and President of the Jekyll Island Club from 1914 until his death in 1919.  There is also a beautiful Tiffany stained-glass window in the Jekyll Chapel in memory of FGB that was placed there following his death.  In life he was President of the world's first international conglomerate, The Singer Sewing Company from 1882-1905.  His neighbors at the apartments were William Rockefeller (JDR's younger brother), JP Morgan, and William Astor.  The Hotel / Clubhouse also hosted many swank dinner parties attended by Carnegie, Rockefeller, Gould, Frick, Marshall Fields, George Fisher Baker, Joseph Pulitzer all who has residences there.  It had many rooms that guests would rent out while there. Additionally, there were many 'cottages' built surrounding the clubhouse grounds that belonged to the many Gilded Age families that wintered there.

It was the place to be from January - March each year.  They would all sail their steamship yachts there for the winter.  Pulitzer's Liberty, Baker's Viking, Bourne's Alberta, Morgan's Corsair, Rockefeller's Willie Roc, they all docked there for the winter months.  And, a lot of great history occurred there over the years.  Jekyll Island's golfing was the inspiration for Bobby Jones Jr. to team-up with Alfred Severin Bourne to create Augusta National Golf Club and Course on the mainland in Augusta Georgia.  The clandestine meetings of Senator Nelson Aldrich (JDR' Jr's father-in-law), JP Morgan and his cronies to brainstorm the creation of the Federal Reserve Bank took place there for two weeks from November 22, 1910 >  with a whose who of business and banking titans.  Another important event at the clubhouse was when the first transcontinental phone call was made in January 1915, with Woodrow Wilson, JP Morgan Jr., Bourne, and others in attendance and on the line with Alexander Graham Bell and his loyal and competent Mr. Watson on the other end in San Francisco.  The Club flourished until 1941, when its members stopped coming, probably for fear of the image it projected to the rest of society.  Our boys had been dying overseas in WWII fighting to preserve our freedoms.  By 1944, The Jekyll Island Club shut it's doors in bankruptcy, and Palm Beach Florida had become the place to be.  Eventually, the state of Georgia took over Jekyll and made it a tourist destination again for all to enjoy.  There are still several of the old homes there to be toured, a museum, and lovely little town, and of course all the outdoor activiites that it has to offer.  Jekyll certainly captured the imagination of the country, during the it's reign as America's hotspot!  It's a place where time stood still, a place where you can imagine the ghosts of the Gilded Age still mingling with each other, while on holiday from conquering the world!  Its pristine white sandy beaches are some of the widest and most beautiful in the world!  You can stay and dine in the original clubhouse still known as The Jekyll Island Club.  Well worth the trip!

Relaxing By The Pool On A Sunday Afternoon

Image Credit: @artbytes via Bitlanders Sunday. I am now sitting beside the kiddie pool watching over…