Hi friends, first of all thanks to bitlanders which is a best source and platform in order to express feelings and experience on any topic,so today i am going to show my experience about the Carnivorous plants,These are the plants which attracts and catches the insects and other living creatures by their trapping mechanism and easily gets nutrients through digesting system.There are thousands of species of carnivorous plants with different shape and size having different trapping mechanism in different places of the world but some of the most popular plants are given below. 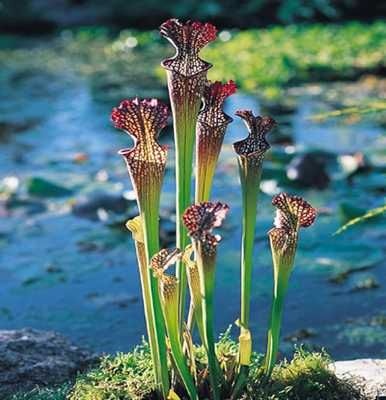 Sarracenia leaves resembles with a funnel having hood like structure growing over the plant to prevent rain water from diluting the digestive juices in it. Insects and other living creatures  are attracted by smell,colour and a nectar like secretion on the top of the pitcher. because of having Slippery footings, at least one species is aided by a narcotic drug lacing the nectar and it causes insects to fall inside where they die within some time and are digested by enzymes easly. 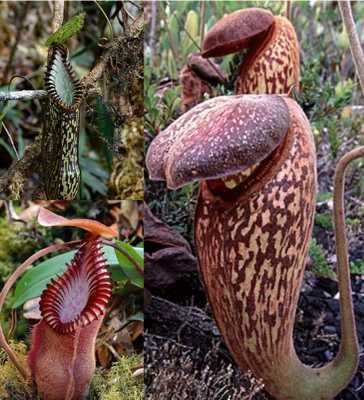 Nepenthes is also famous for tropical pitcher plants or monkey cups, these are also the genus of carnivorous plants with pitfall traps . according to survey There are 130 species that are widely spread on earth and it can be easly found in  Malaysia,china,Indonesia,Madagascar,Philippines, Seychelles,India,Australia, Sumatra and Borneo.The nickname “monkey cups” comes from the fact that monkeys have been observed drinking rain water from the cups of this plant.

The height of the Most of Nepenthes species are tall 10-15m with shallow root.its leaves looks like growing sword having a tendril from the tip of the leaf. At end of the tendril the pitcher forms first a small bulb which expands and forms a cup. The plant produced fluid in a trap whic can be watery ors syrup and it is used to Attract and digest insects.On the lower part of the cup  galand is situated that distribute and absorb nutrients. Most of these plants are small and able to trap only insects, but in some larger species such as  Nepenthes Rajah and Nepenthes Rafflesiana are able to catch small mammals like rats lizards etc. 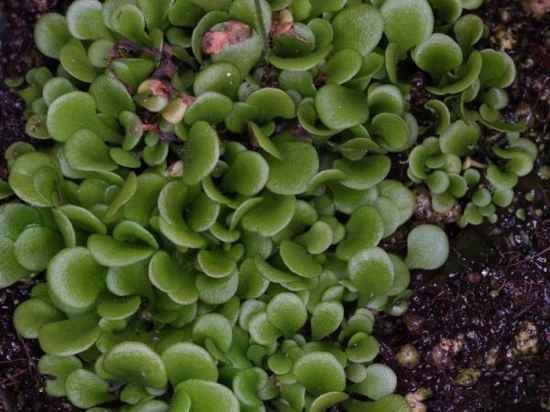 Genlisea is also known as the corkscrew plant . According to survey there are 21 species of genlisea  is made up of 21 species and generally grows in semi aquatic and wet terrestrial environments and can be found across central and South America and africa.

these are small herbs having yellow flowers that makes Traps that are very easy to enter but very difficult and impossible to exit from it, having small hairs growing towards entrance, the ever forward propelling spiral. In this case of plant there are two distinct types of leaves which are given below,

photosynthetic leaves are used to attract,trap and digest minute creatures for example protozoans.Underground leaves having  the duty of roots like anchorage and absorbing water.Hollow tubes are formed by the underground leaves under the ground with "forward propelling corkscrew" shape system and also having constant water flow,minute creatures can easly make their way to enter in these tubes but will not able to find way out again,they will be absorbed and digested easly  on the correct part of the tubes. 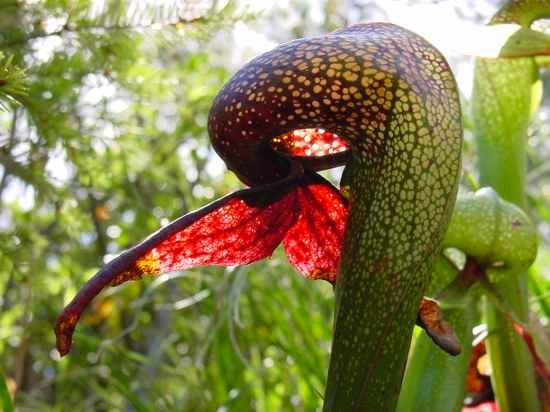 The leaves of the Cobra Lily bears bulbous having hollow cavity with a structure underneath a swollen balloon like structure and 2 pointed leaves hanging at the end of the plant.A pitfall trap does not used by the cobra lilly, in this case insects can enter easly into but confused to come out by light speckles.There are thousands of fine dense hairs  grows inwards the plant insects follow the hairs to enter deeper to the digestive organs but they not to move backwards to escape. 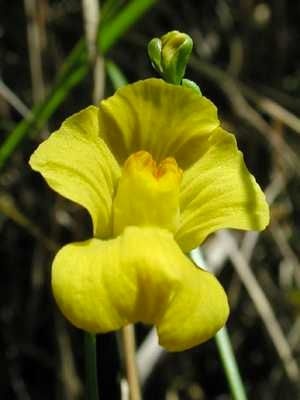 Utricularia is also famously known as bladderworts.It is another genus of carnivorous plants having about 220 species.They can be found in fresh water and wet soil as terrestrial or aquatic species on almost every continent expect antarctica.

These carnivorous plants uses the bladder traps, Most of these species have very small traps by which they catches only minute creatures like protozoa etc, range of traps  can be from 0.2 mm to 1.2 cm.Larger trapping larger creatures like small tadpoles and water fleas.

On a trapdoor having small trigger hairs.when the trigger hairs are tripped, the doors of trap opened up and suddenly sucks the insects and surrounding water and closes the door again. 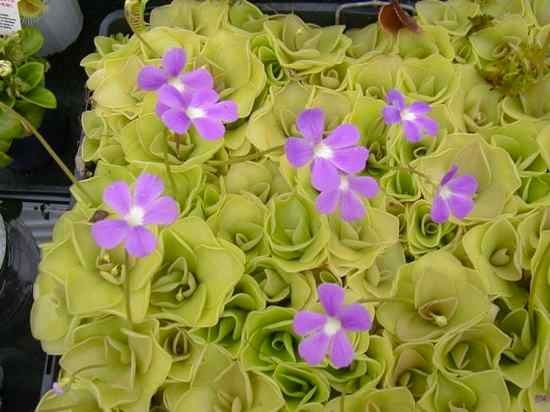 Pinguicula is also famous as butterworts , these are also gens of carnivorous plants these plants uses sticky leaves for  traping , lureing and digesting insect and other small creatures.According to survey there are about "80" species and  can easly be found at North america, South America, Asia and Europe.

The leaves of this plant can be usually bright green or pinkish. This plants holds two special cells on the top of the butterwort leaves.

1st gland penduncular having  secretory cells on top . These cells able to produce  "mucilaginous secretion" that forms visible droplets across the surface of leaves and also behave like flypaper. The 2nd glands are sessile glands, They usually lie flat on the surface of the leaves and also able to produce enzymes like esterase ,amylase and protease, which is very use full for digesting process. 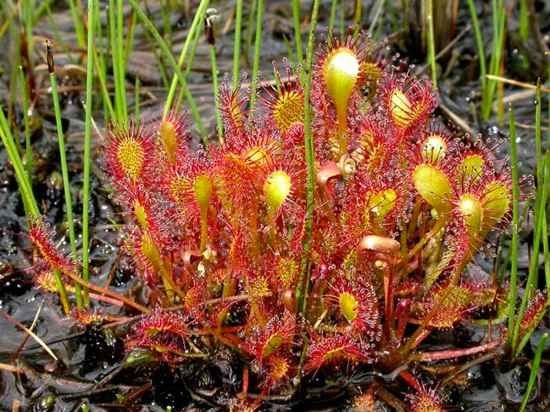 Drosera is also famously and commonly known as sundews.it is anther genes of carnivorous plant having about 194 species .These are widely spread on every continent exccept Antarctica.its height is about 1cm - 1m  and this plant is able to live up to 50 years.

it is  movable glandular tentacles having topped with sweet and sticky secretions. this plant is able to trap the insects by  landing of insects on its sticky tentacles and plant is also able to move more tentacles in the direction of the insect.After traping small "sessile glands"  digest the insect and resulting nutrients which are used to aid growth. 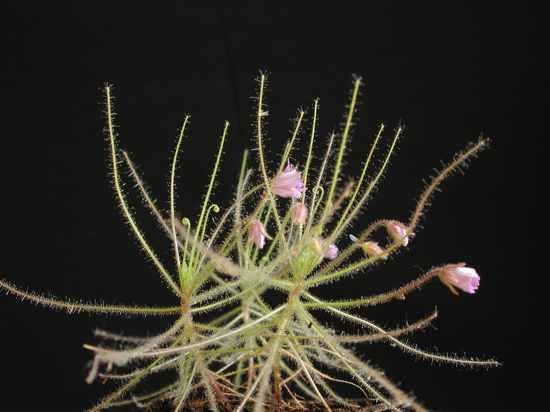 Byblis is commonly a known as a rainbow plant ,it is a small genus of carnivorous plant  and can be found easly throughout  Australia . The name rainbow plant comes due to attractive appearance of this plant .these plants looks like similar to the Drosera and Drosophllum but it is not related to any one of them and also may be distinguished as "zygomorphic" flowers with five curved stamens.

usually leaves having  round cross- section  and at the end  they are tend to be very tapered and elongated ,Leave's surface is completely covered with hairs that release a "sticky mucilaginous substance" which traps small insects and minute objects . 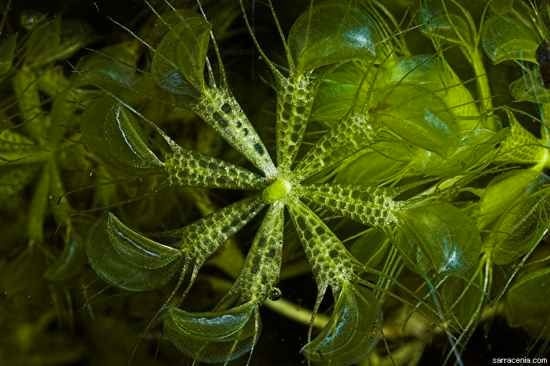 Aldrovanda vesiculosa is also famous as waterwheel plant , it is rootless carnivorous plant and  It lives on small aquatic vertebrates by using trap mechanism called commonly known as snap trap.

These types of plants consisting of free floating stems its height is usually from 6 to 11 cm in length and the trap leaves are from  2 to 3 mm . Traps system is attached to petioles it contains air & assists in "floatation". This plant is a very fast growing plant and capable of reaching upto a 4 to 9 mm per day and in some cases even producing a new whorl every day.

In this plant the trap is consists of two lobes it folds together and makes the "snap traps". The trap gets close in just only 10 milliseconds, it is one of the fastest examples of the carnivorous plant movement . 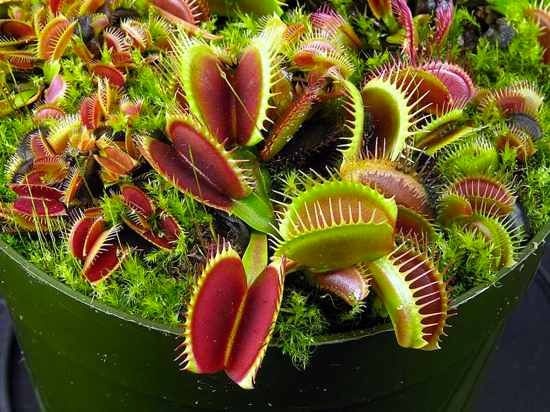 Dionaea Muscipula are commonly known as a Venus flytrap, It is the most well known carnivorous plant and can trap arachnids and insects.

The Venus flytrap plant is a small plant having 4 to 7 leaves which grows from short "subterranean stem". The leaf of this plant  is divided into two regions  long flat heart and a pair of terminal lobes hinged at the midrib in order to forming the trap. Having the edges secrete mucilage and the red pigment at the inner surfaces of these lobes.

These plants are also famous for rapid movement due to sudden shut by sensory of special hairs.These plants are very  advanced it is capable of telling difference between "live stimulus and non living stimulus". The lobes shut in just  0.1 seconds. when insects lands on the surface of the lobes the leaves will shut suddenly and will make seal insects will find  no way out and at last insect will be crushed edges of the lobes, and further digestion process will be taken.  place....

Here are some videos about carnivorous plants

note: All the videos are taken from youtube.com and pictures are from google.com. 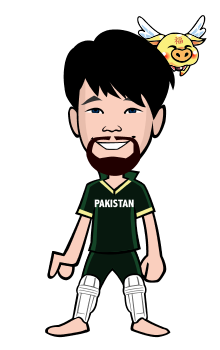