The numbers are in: Britney's Vegas show is a hit 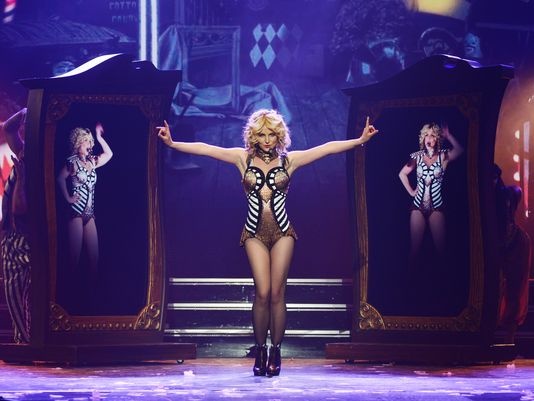 Pop's reigning queen has cleaned up with her Las Vegas residency, Britney: Piece of Me, which opened Dec. 27 and has grossed $10.9 million to date, according to Caesars Entertainment. All 16 performances through Feb. 22 were sold out (72,000 tickets total).

Although some music pundits were skeptical about Spears' Vegas prospects leading up to her debut at Planet Hollywood's Axis theater, many fears were put to rest once the femme fatale thundered through a dazzling first performance before fans such as Miley Cyrus, Katy Perry and Selena Gomez.

The fact that she's struck a chord with Sin Cityaudiences is no surprise, says Keith Caulfield,Billboard's associate director of charts.

"It should be selling out," says Caulfield, noting the venue's small size (4,600 capacity) compared to the "10,000-, 15,000-, 20,000-seat arenas that would sell out" on tour. And with 98 shows sprinkled out over two years, "she's not playing every night, so there's going to be a fair number of fans planning their Vegas trip this summer or later this year (around) Britney. You can't just assume that all of Britney's diehard fans flew to Vegas in the period of two or three months."

Since December, Spears' residency has been the top-searched topic on Vegas.com, says Jennifer Whitehair, the site's content director, adding that the big numbers make sense given Vegas' shifting demographics.

"(Fans) really got what they wanted to see from her," Whitehair says. "It's a huge audience that's been underserved in Vegas for a while, this younger demographic, so you're going to continue to see interest in shows like Britney" and other "club-like" entertainment.

But could ticket sales slip as initial chatter dies down (her next show isn't until April 25) and new residencies open up shop on the Strip? Not likely, Caulfield says, given that people who wouldn't come to Vegas specifically to see Britney are still likely to buy her tickets through a concierge or broker once they get there.

"It's not necessarily front-loaded," he says. "It'll probably still continue to do well and continue to sell out, that's the assumption."