THE TRADITION OF WEDDING IN PAKISTAN

It is a legal Union between men and the woman and with respect to culture it is not only the link between husband and wife but also the alliance between between their families about 97% of the population is muslim and the islamic law (shariya) is practiced.

Some of the most common events that are held in Pakistan

By the Islamic point of view there are two requirements that are essentila Nikah and Walima and others are cultural requirements as an addition hence, the registration of Nikah is Legal requirement.

Arrange marriages are an integral Part of the society for many years in Pakistani societies and it is sill prevailing.Marriages are often arranges within the family or within the community is ethnicity.Social and the moral status is taken into consideration.There are two types of Arrange Marriages in Pakistan.

Semi-Arranged Marriages are those in which the couple makes the final decision.If they both are agree the decision are taken into final count.

In Completely Arranged Marriage the couple has in no Authority to make decision in respect of their Parents and the decision is final.

Love Marriages are becoming more common and the social acceptable in many parts nowdays in Pakistan.However the newer generation are love to do so because in this way the both parties are able to know each other with the questions and the understanding.

Dating has becoming a new phenomena in Pakistan but it only happens behind the scene because of the families honour and the respect.

Marriage proposal is generally is the reception held at the bride's house where the groom's parents and elders ask from the bride's parents for her hand in Marriage.In the Religious families where the once the Proposal is accepted the families read Surah-ul-Fatiah and tea and other refreshments are served.

It is a formal ceremony to engage the couple.it is a very short ceremony in which the close members are invited from both of bride's and grooms families and the rings are exchanged between the bride and the groom.

Traditionally the bride and the groom are not seated together.Prayers and blessings for the couple are recited and also the wedding date is decided.

The celebration takes its name from the instrument called Dholki.Respective of culture many days or even weeks before the Marriage,woman gather in the bride's house at night to sing and dance while accompanied by this instrument.Now this ceremony is reduce for one single night. 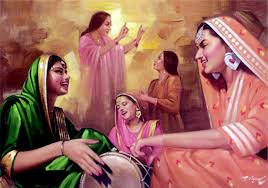 Mehndi or Rasm-e-Henna ceremony is typically takes place one or two days before the actual day and the event is held separately between the Groom and the Bride's Home.The Henna is symbolically placed on the hands of the couple.The family of the groom and the friends bring along sweets and henna for the bride and the bride does the same

For the groom function it is called Tael (oil) where the female guests put oil into the groom's hair. 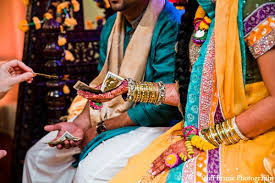 The clothing of couple

The Bride normally wears a green , yellow or orange dress for the Rasm-e-Henna celebration and uses only light and there is no make up mostly.The wears normally simple shalwar Qameez.The Bride and the Groom are brought mostly under the decorative dupatta by their close relatives.

mahr is a mandatory payment that the groom should need to pay to the bride.While mahr is the often money it can also be agreed upon by the bride such as jewelry it is typically specified marriage contract signed during the Islamic Marriage.

Baraat is the procession of the family relatives and friends of the Groom and they accompany the Groom to the bride's home for the official wedding ceremony.

Nikah id an official marriage ceremony in which the marriage contract is signed by both the Groom and the Bride's presence of their close friends and Parents.Wedding is illegal without the Nikah.Nikah is performed by a religious person who has the License issued by the Government.

Muslim weddings are enormous in accordance with the culture the people involved in. Many people are Literally confused about the traditional weddings ans assume that they are the same thing.This  is not so, of course many of the Muslims who marry are from widely different cultures.

It is important realise that the wedding means different things to do for many Muslims it an Islamic ceremony.

So far , as in UK majority of the weddings are not registered because of the UK Law,and Islamic Weddings usually takes place at Mosque and to be registered with the Law.

By the Islamic point of view it is a legal contract.In Islam a person should be married properly and this includes both the Legal and the Religious requirements of the Law.

In Islam Marriages are not considered to be made in heavens.Actually they are social contracts which brings right and the duties of the same parties and can only be successful if both the parties are agreed to follow each other and cherished.

In Case of Broken Contracts

If the contract is broken and either the party seeks for divorce by the Law it is assumed that the couple will remain the together.However Islam is realistic and aware that many marriages go wrong and break down for all sorts of reason.it is very important for person getting married should do their utmost to make the partner satisfy and happy