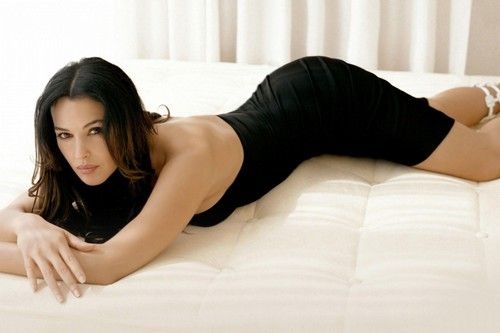 Italy is known for its wine and food, and of course the hottest Italian men, but not leaving them far behind, are some of the hottest and beautiful Italian women who have charmed the world with their beauty. From Sofia Loren to Monica Bellucci, Italian women carry an international reputation as one of the most beautiful in the world.
It can be argued that no country in the world produces “beauty” better than Italy. Here, we selected for you a list of the top 10 hottest Italian women celebrities and models. I hope you enjoy the list!

The beautiful Italian television and film actress. Martina Stella made her cinematic debut at the age of 16 in 2001 in L’ultimo bacio. The film was a success in Italy, and was nominated for multiple 2001 David di Donatello awards, including Best Film.

Most popular Italian television personality and model. She became famous following her appearances on the Italian television show Striscia la notizia.
Giorgia Palmas began her career when she finished second in Miss World 2000. She then appeared in various Italian television shows including Isola Dei Famosi in which she was the winning contestant. She also was also spokesperson for various brands including Cotton Club brand underwear and posed for Max Magazine’s famous calendar.

She began ballerina at the age of 17. She has appeared on many television shows as a co-host. Federica is a superb model and still does many fashion shows. She is a daughter of an actor Gianni Ridolfi and is engaged to a soccer player Giuliano Giannichedda. Federica Ridolfi starred in Quelli che… il calcio, live sport, comedy and music TV show that announces in real time goal of Italian Soccer Championship, with Simona Ventura.

Melissa Satta is an Italian-American television presenter, socialite, and occasional model and actress. She spent her youth in the island of Sardinia, land of origin of her parents. She began her modelling career at the age of 16 in her native, Sardinia. Later, her pretty face got her many fashion projects and runways in Milan. After her successful stint at modelling, she head to television and movies, doing some wonderful shows and movies. Not to mention, this long leg beauty has dated several good looking men in the past, but now she is currently dating Kevin Boateng, AC Milan midfielder.

Elisabetta Canalis is an Italian actress and showgirl. She began her career with acting in Italian movies. Her bold personality with great dancing moves ended her up with participating in Dancing with the Superstars. She has modelled for big fashion labels like Roberto Cavalli.

Elena Santarelli is a television host , model and actress. Unlike the typical dark haired Mediterranean women, Elena is long blonde hair and renowned for her long legs and stunning tall figure. She began her career modeling for the likes of Giorgio Armani and Laura Biagiotti. She later moved to television where she appeared on Italy’s famous reality show Isoladeifamosi and Italian MTV as host. She continues to appear on television hosting various events.

The 2004 Miss Italia, Cristina Chiabotto is a TV presenter, model and showgirl. She works as TV presenter for Juventus Channel.

Claudia Romani is a model. She has appeared on covers such as GQ and Maxim, and in 2006 was voted one of the 100 Sexiest Women in the World by FHM Denmark. Her career started with modelling and she also went on to become a pageant winner. She has made her niche on television with Spanish shows like EstaNocheTu Night’ on Mega TV. Her natural beauty and enthralling personality makes her extremely popular amongst her fans.

Born in 1993, Giusy is an Italian model and winner of the 73rd edition of Miss Italia 2012 representing Sicily following a recent list of Siclian Miss Italy’s such as Miriam Leone. Giusy is currently following her passion for film and continues to model.

Monica Bellucci is an Italian actress and fashion model. Perhaps no other Italian woman has garnered more attention in the past many years than Monica Bellucci. She has been the face of such brand behemoths as Dolce & Gabbana and Dior Cosmetics. She remains an international sex symbol not just because of her voluptuous curves, but also because of the palpable intelligence and charm she conveys in her films and interviews. She is often regarded as the 8th wonder of the world and yet unlike the thin runaway models of Milan and Paris her beauty is only magnified by her natural curves.