Top 5 Weird and Most Amazing Places on Earth

Weird as it seems, this has captured the interest of many and has been referred to as the “devil’s triangle” for the reason that any ship or plane that may enter this triangle vanishes into thin air.

Massive ships and huge air planes have disappeared into nothingness and to date, no one has discovered why. It remains a mystery to people and scientists. The three points covered by the triangle corresponds to three places namely Bermuda, Florida and Puerto Rico.

The term Bermuda Triangle was noted by Vincent Gaddis way back in 1964. Since then, researchers have been digging deep trying to find answers as to what exactly occurs within this queer and puzzling triangle and what really makes things and people vanish.

It is thought by some that there are probably unexpected problems in navigation experienced in the air which confuses the pilot that’s why the plane eventually ends up landing in the ocean. This is one mystery that is yet to be solved, where people and scientists are both hopeful and eager to be enlightened but for now, nobody dares to go to this place anymore because it would mean calling out to death!

Another weird place in this planet is the popular Travertine Pools. These earthy and beautiful, breathtaking pools are bizarre in a way that no one can actually tell or explain how it has been formed.

Story tells that around thousands of years ago, Turkey, where this place is situated, was faced and shattered with earthquakes, one after the other. The occurrences brought about the formation of fractures which created hot springs. It showered the place with overflowing amounts of water that was infused with calcium carbonate. Once the water ran dry and evaporated, it left a chalky stuff which got thicker and formed massive layers of this thick substance which then turned into walls.

This place is believed to be the lost world since it is positioned away and off coast of Yemen. It’s a perfect picture of a weird yet heavenly world, which will make you genuinely happy just by reveling in its beauty. Filled with natural aura and environment, it serves as one great vacation spot that you must visit for a one of a kind and unforgettable experience of a lifetime. You will be rejuvinated and feel full of life upon witnessing this small, simple yet magnificent island which is also called Socota. Fact is, it is a chunk of land that was isolated from the world around 6 million years back in time and houses an estimated 900 species of weird and unusual plants unlike anything else on earth.

Here you will find the most popular tree- Dragon’s Blood which is utilized in crystal production. One other plant is the Desert Rose, or more popular as the Elephant’s Leg which has very distinctive qualities that stands out from the rest.

Located in the Bahamas, it is named as the blue hole because of its deep cavities arriving in circle shapes.

Divers reportedly have seen new species and creatures which is yet unknown. The hole has an estimated length of 14 km with chambers filled with stalagmites and stalactites. Here’s a picture of a diver deep into the Belize Blue Hole.

It’s believed that sea level may have been lower than 150 m as compared to what it is today and in time, water made the limestone worn out and then formed caves. After this, the sea level rose again while some collapsed and formed blue holes. This happened around 65000 years ago during the ice-age.

Appearing in the form of the human eye when viewed from space, this weird place is located in the Sahara Desert, Mauritania, and considered a Richat structure which is elliptical in a small degree and 40 km wide. It contains various kinds of both intrusive and extrusive igneous rocks. 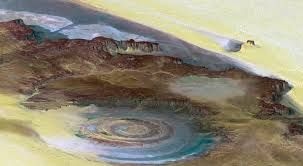 The truth behind how it has been formed is a mystery to researchers and all people. Some speculate that it was caused by nuclear blasts that occurred thousands of years ago.