Just a note:  I tried blogging previously, but had no real clue how to reach an audience.  I've decided to try again here on Film Annex.  I'm going to post some of my original blogs, all of which have been removed from the original source, to catch you up to where I am now.  This is where I was mentally in June 2012.  I hope you'll follow along.

My wife and I are expecting twins...so this first post probably does not go back as far as it should, it's not really how it all began.  I think in subsequent postings I'll go back further, to our decision to expand our family, but for now lets just look at last week, when the stay-at-home portion of my adventures first came about.

The decision to become a stay-at-home dad is a difficult one, or at least it can be.  Some of us make the decision based on economics, others because of their own personal desires, and others don't have a say in it at all.  Regardless of the why, however, men are held to a different standard than women when it comes to family life (not necessarily by our spouse, but by ourselves and other men for certain).  Now, some of you are thinking, lots of dads stay at home...like my brothers friend, what's his name...he stays home.  Come on, things are not like they were...modern, sensitive men raise their children.  They change diapers and wear specially designed shirts with baby bottles attached to the chest so they can fully experience breast feeding.  They openly cry at the romantic climax of the film (that they choose for date night) when the lead actor finally proves to the lead actress that "it was her...it was always her."  I know that right now, each one of you is shaking your head, the women thinking yes, that's the man I want, and the men thinking, where can I get one of those shirts, and how am I going to do all that and still provide for my family?  Regardless of how far we've come as a society here in North America, men still think in terms of providing.  Men cut the grass and take out the garbage (providing clean shelter), keep burglars out of the house (providing security) and bring home a paycheck (providing the literal and proverbial bacon).  We feel terrible if the lawn looks ragged, like a coward if we are not rushing downstairs in the dead of night, baseball bat in hand, and like a loser if we are not earning money.  So like I said, the decision to become a stay-at-home dad is a difficult one.

Even before my wife got pregnant, when we first decided to expand our family, we discussed the stay at home options.  We both have careers we enjoy.  My wife works for the government doing something complicated that I have no understanding or ability to describe (she does not work for CSIS nor the ministry of magic), and I am an animator.  I work in film, TV and video game animation, always on contract, and always someplace new.  There is no real stability in my work, short term contracts, with typically substandard benefits, and the pay is normally half of what my wife brings in.  But I love what I do...so do most other animators, which is why we do it.  When discussing our hopefully soon to be expanding family, my wife and I came to an agreement, she would take advantage of the excellent maternity benefits offered by her employer over the first year, and I would finish whatever contract I was on and stay home for the second year.  The thought of not working was frightening, a year gap in my resume along with softening of my ability to animate would, I feared, make it difficult to return...but, as long as I worked on my own stuff at night, between feedings and scrubbing baby poop off my fingers, it could surely be done.  And really...that was years away, first my wife had to get pregnant, then she had nine months of carrying most of our family around with her, and then she was going to stay home for a year once they arrived...I still had two and a half to three years to concentrate on work.

I was thinking about that deal last Friday on the subway on my way home from work.   We still had 2 months before the twins, two girls, arrived.  A mother and daughter got on the at the station after I had.  The mother had a worried look on her face, and she was holding a few tissues to her daughter's lips.  They sat across from me...all my work possessions were boxed on my lap...the layoff notice on top.  You've finished all your shots, they told me, as production winds down we need to reduce staff, blah, blah, blah...my wife was ecstatic when I called her, that means you can work on the nursery and that you'll be around well after the twins are born.  We won't be restricted to just the couple of weeks they were going to give you as vacation...we can get through the really tough months together.  Maybe you don't have to go back to work at all!  (can you hear the echo?)  I looked at the mother and daughter, the little girl was leaning, eyes closed against her mom.  Then the she made a face, which was accompanied by little gurgle noises, her tongue came part way out with each dry heave...the mother looked around, I could see the fear in her eyes as she pressed the few tissues she had to her daughter's  mouth.  Looking over my possessions I had to decide between the plastic bag in which I kept my terribly wet, gym shower flip-flops or the plastic bag in which I kept my workout clothing (10 km at the gym that morning).  Dumping the still soaked clothing I handed the bag over to the mother, she snatched it away and held it up over her daughter's mouth and nose.  The girl vomited, I'm guessing as much from the lingering smell of my gym clothes as from whatever bug she had contracted.  The liquid spewed in multiple directions, it's flow directed by the numerous holes in bag, in a much wider pattern than I would have expected had she not had a bag at all.  I got off at the next stop.  The decision to stay home had been taken out of my hands...now I just got to work on the dad part, and though I'm scared, I'm looking forward to every moment of it. 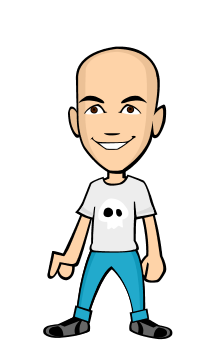 Brian Sinasac has been working in film, TV and video games as an animator since 2007. Before changing careers, Brian worked as an electrical engineer and software designer.