Your best T-shirt should be like your bed; it just feels like you are home when you are in it.
- Ashton Kutcher

T-shirts are very comfortable to wear and I believe everybody has it and wears it. Who doesn't, right? One could surely find shirts that will suit his/her preference, for shirts are very common items in a clothing store. Plain, striped, graphic, etc. Whatever design you are looking for, shirts have it. A good medium for self-expression as well. Shirts helps you show your mood, display what you like, or what you are into. There are shirts for bands, organizations, election, school, work, etc. There are lots but one of which that I will be writing about today is about an anime shirt collection released by a popular clothing brand Uniqlo. 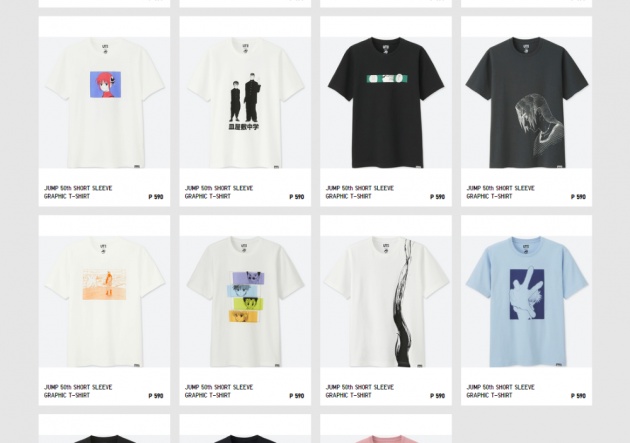 Uniqlo (ユニクロ) or "unique clothing" is a Japanese clothing brand established in 1984 at Hiroshima, Japan. Uniqlo promotes comfortable clothes that you can wear every day wherever you are going. Thus, having a slogan, "Made for all." The company designs and manufactures their items but also welcome other designers to collaborate with them.

The brand was first called "Uniclo" but was changed to "Uniqlo" because the letter "C" was mistaken as "Q" when they registered its subsidiary company in Hong Kong. From then on, they applied the misspelled letter to all their stores which all of us know today. As of today, Uniqlo has around 2,000 stores, in Japan and across the globe combined.

Weekly Shonen Jump (週刊少年ジャンプ) is a Japanese weekly manga(comics) magazine published by Shueisha. The magazine was launched in 1968 and caters comics with action genre generally aimed for young boys. However, girls and even adults read it too. Some of their most popular manga are Dragon Ball, One Piece, Death Note, Slam Dunk, and more. Weekly Shonen Jump isn't only available in Japan. In fact, it is also published in other countries such as in North America (called Shonen Jump) but in a monthly basis. This only shows that Japanese comics are loved all over the world.

This year, Weekly Shonen Jump celebrates its 50th anniversary by collaborating with Uniqlo to produce manga-themed shirts. The graphic tees features some of the most iconic scenes from the manga so wearing one is like expressing your most favorite part of the story and showing who your favorite character is. In addition, it is also like having the mangaka or comic artist draw the characters on your shirt. It's amazing! 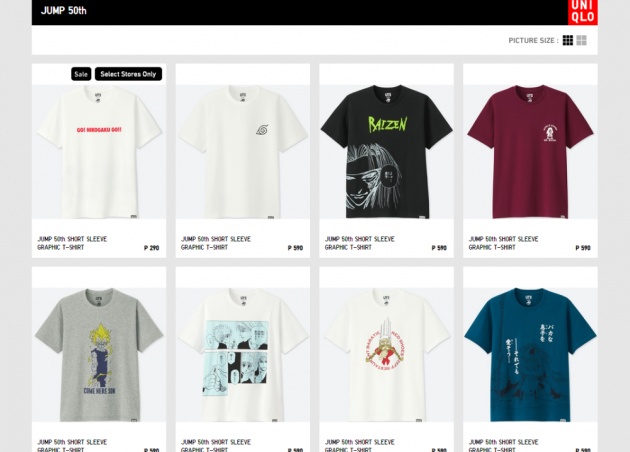 The collection was released in Japan last April 16 and around July in the Philippines. The shirt price is Php 590 but you can catch some on sale for only Php 290. Don't worry if you're a female, you can definitely wear it too! If you are a fan of a manga published at Weekly Shonen Jump, then having some (if not all) of the collaboration shirts is a must have! (Check Uniqlo Philippines for the available Weekly Shonen Jump shirts!) If you are not from Philippines, you can try searching if there is a Uniqlo store in your country. Most likely, there is also a Uniqlo website for it so you can easily check which designs are available in your country.

ANIME SHIRTS I GOT 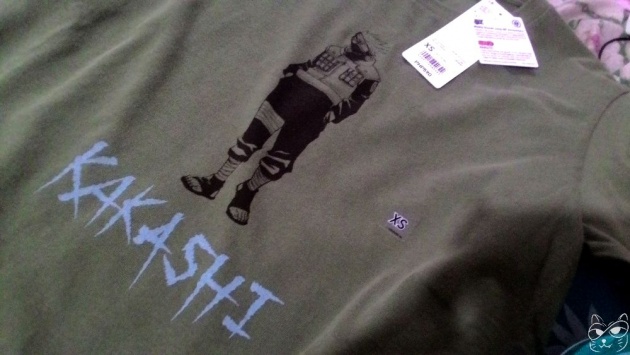 On my first visit at the store, the first shirt I bought from the Weekly Shonen Jump and Uniqlo collaboration is a Hatake Kakashi shirt from the manga Naruto. Kakashi is one of my favorite characters and I like the shirt's color too. (My mother also approved of this shirt because I still don't have this shirt color.) The shirt has a whole body print of Kakashi standing with his usual laid-back look. However, the print was small in my opinion. I wish they did another design of Kakashi where he is reading his favorite book. 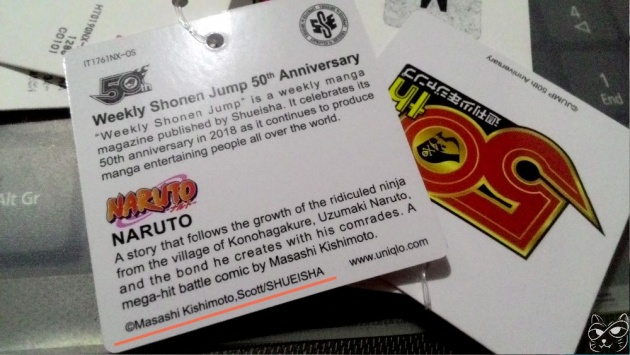 While removing the price tag of the shirt, I noticed the mangaka's name "Masashi Kishimoto, Scott" which got me wondering of the name "Scott." Is it his middle name? I have a hunch that it really is, based from the articles I've searched just now where his name was mentioned. Wow, I didn't about this until today. Thanks Uniqlo! I've discovered something new about the artist! 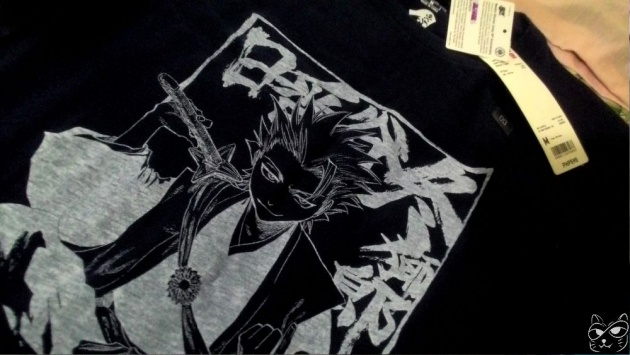 I bought two more shirts when I returned at the store, one of which is a Hitsugaya Toshiro shirt from Bleach. Here's a short dumb story. I didn't know that the shirt has prints on both sides. On my first visit, I was looking for the shirt with Hitsugaya print on the folded shirts at the shelves but all I could see was Aizen. I kept skipping it until I went back and unfolded the shirt with Aizen. Voila!

I bought the shirt on my second visit at the store because I was unsure if I should buy it or not for the smallest size available was medium. It's quite large for me. (I even asked Yannn if she could find me a smaller size since she also bought some of the collaboration shirts. Lol.) So I did a debate inside my head first, let a few days pass and see if I still want it. Guess what. I still want it. Anyway, oversized shirt is on trend right now. 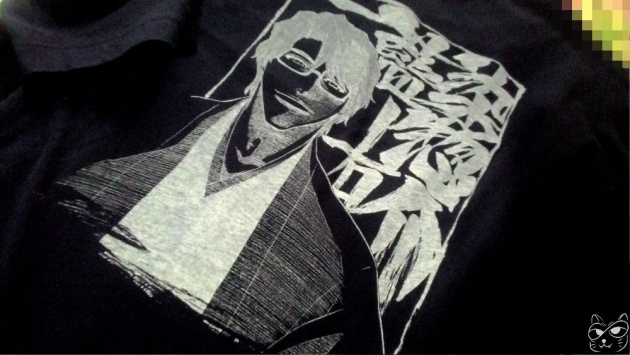 Alright, so describing the shirt itself, it is a navy blue colored shirt with Hitsugaya Toshiro on the front print and Aizen Sousuke at the back. Hitsugaya has his fingers on one hand posed in a way like he is motioning you to come closer while his other hand is holding his zanpakuto. Meanwhile, at the back of the shirt is Aizen with an intimidating look. Each of them has some Kanji characters written which I cannot decode for I cannot understand Kanji characters. Plus, it's written in calligraphy style. Great. I wish they added Hiragana characters for Kanji noobs. But overall, the shirt looks awesome. I hope I still look awesome with the medium-sized shirt though. This is the last piece of the design at the store I bought it from, by the way. (Lucky!) 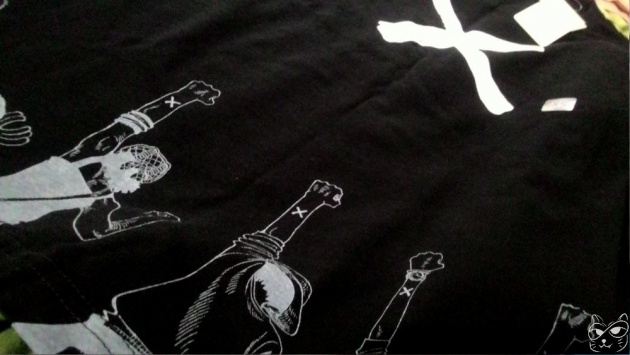 Last but not the least, is a One Piece shirt with the Mugiwara no Ichimi (Straw Hat Pirates) showing off the nakama sign which is an "X" sign at the back of their hand. "Nakama" means friend, partner, or comrade. The shirt is black with a print taken from the scene of Alabasta Arc where they were bidding their farewell to Princess Vivi. It was one of the early arcs of the story so some members were still missing. Characters present on this shirt are Luffy, Zoro, Sanji, Nami, Usopp, and Chopper. 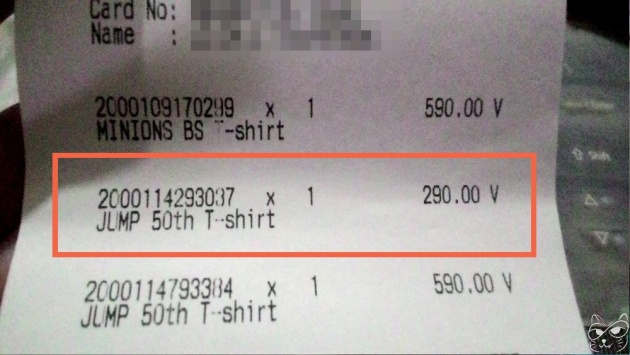 Here's another story, not a dumb one, a cool one actually. This shirt should cost Php 590 just like the other two shirts but (surprise) I only got it for Php 290. Wow! It was on sale! I thought they just made a mistake until I saw the shirts on sale at the website while writing this blog. I saved Php 300 for this shirt. Such a huge discount!

The shirts, by the way, has a tag at the hem. Written on tag is the word "Jump" (ジャンプ) in Katakana characters. The word is written on both sides of the tag so if you have one of the shirts try to flip on the other side and you'll see it. Lovely!

A short background story about Weekly Shonen Jump and the manga is also included along the price tag. I'll surely keep this one for remembrance!

WHY I BOUGHT THESE SHIRTS 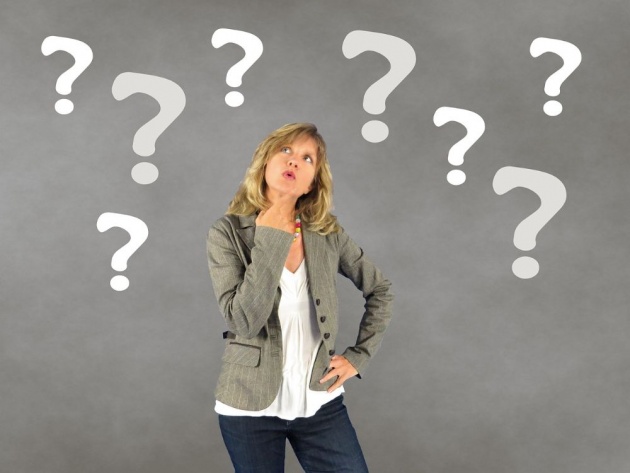 It's silly why I should be including an explanation for buying these shirts. Of course, you know I love anime and manga so it's no longer a surprise if I get some for me. However, buying these shirts was not a plan at all. I was so tempted the first time I saw an article about it early this year but I told myself not to mind it for it's quite pricey. (There are lots of good designs that I can't only buy just one!) I've already totally forgotten about it until I went to a mall and got upset over something. To ease my mood, I walked inside a Uniqlo store and the rest is history.

Uniqlo and Weekly Shonen Jump collaboration is a perfect team-up for me. I wish they do more designs together in the future. These shirts are actually my first manga-themed shirts so I am very glad to have them. I still plan to buy a few more in the next months. I am just hoping the designs I like are still available that time. These shirts might not matter to some people people, but for manga and anime fans this is a must-have collection!