What's Up with Upshaw? Back to Basics

This has been a quite turbulent week for me.  In preparing to do "Afghanistoons" with Edward Zellem (see, I got your name right, Edward!), I've encountered one thing after another, good and bad and in between, that's shaken me up and made me question things.

First, the online article mentioning sexual harassment in the comics world and brutal treatment of women in Afghanistan disturbed me.  Then Edward and others pointed out that only certain men, especially those in the Taliban, were doing this and that most modern Afghan men do respect women.  I kind of knew that but needed the reassurance.

Then I learned that Hilary Powell, the reporter from Lakeshore Public Television, wants to interview me in my home, where I do most of my cartoon work.  I'm cool with that;  I just have to clean things up a bit.  When I told my mother about the interview, she, being my mom, told me to be neat and clean with good hair.  Now, I do have a tendency to be a little scruffy most of the time but I do dress well when I need to.  But since this interview is at my home, I don't feel the need to "dress up," interview-style.  A simple t-shirt, slacks and my new blue sneakers will do just fine.  That is the real me.

Last night at Paul Henry Gallery's Acoustic Jam, Lakeshore Pubic TV was there to cover it, interviewing everyone on camera EXCEPT ME at my caricatures table.  The reporter said it was because of my interview next week, but we did chat off-camera.  I was very much taken aback  by this (she could've had me on camera if she wanted to--I AM a part of Paul Henry's), and to top it all off, I did no caricatures and made no money.  On the plus side, I did get to see my hero Lou Shields after his months of playing on the road.

Today is Good Friday, and this morning I decided I was being too much of a worrywart.  I'm treating my "Afghanistoons" publicity like I was on my way to Hollywood, like it was a major deal.  I knew I had to calm down and remember why I want to cartoon in the first place:  I love doing it, and I love sharing it with others.  Money matters but it's secondary to the love of the 'tooning.  With this in mind, I straightened my apartment as well as I could in a short time, grabbed my art supplies, paper and portable desk, got into bed and started doing more "Afghanistoons" comics.  I didn't worry about money, publicity or image--I just cartooned and had fun.

Speaking of fun, I leave you with my Easter "Our Follies" cartoon demonstrating one of my pet peeves:  "African Americanized" versions of popular white stories. 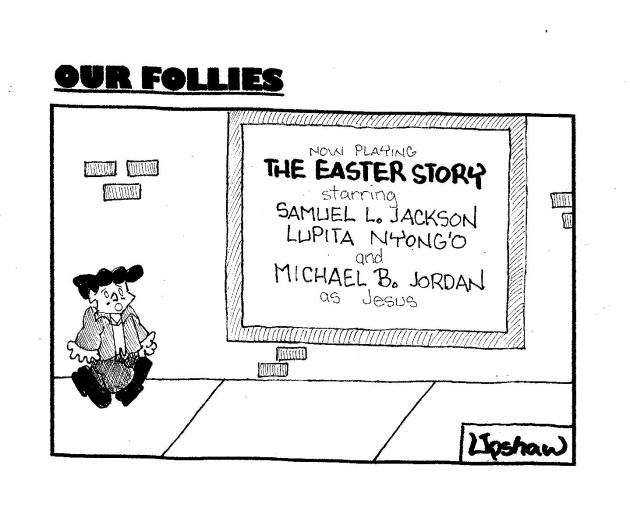