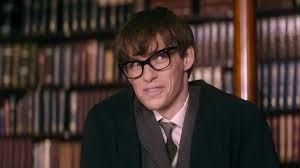 I’m sure Eddie Redmayne is a thoroughly nice chap and that his preparation for a role is very meticulous. Nevertheless, I don’t think that, on February 22nd, he should be collecting the Academy Award for Best Actor.

His version of Stephen Hawking in James Marsh’s The Theory of Everything is not a ‘Best Actor in a leading role’. ‘Best Actor’ performances are more than just being the actor with the most screen time. The characters played by ‘Best Actors’ lead. Mr Redmayne’s Hawking follows.

My gripe is really that Redmayne’s Hawking doesn’t define the film. Hawking is essentially ‘described’ rather than inhabits the screen. The Marsh-Redmayne version of Hawking doesn’t dictate the emotional tone of the film. We don’t want him to succeed. He is not the Principal Viewpoint Character.

The Theory of Everything is, like the vast majority of British movies, a woman’s picture. Its emotional temperature – how we engage with it – is controlled by Jane Wilde (Felicity Jones), the woman who became Mrs Stephen Hawking for 24 years.

Yes, we first see Stephen racing on his bike through narrow Oxford streets. We mark that his freedom of movement is what he will lose. He exchanges a few looks with Jane at a party, but she comes to him, not he to her. She is active. He is the pursued.

We never see Jane as Stephen sees her. Jones’ Jane is perfectly charming and bright and challenges Stephen’s thoughts about religion (he’s agnostic, she’s Church of England). But we don’t begin to understand the source of Stephen’s agnosticism. He (by which I mean the movie Stephen) does not say to us: I am like this and it is going to take a lot to move me from this position.

Stephen’s ideas about the universe change throughout the film in what I can only describe as Brechtian leaps. Jones’ Jane might just as well be Mother Courage pushing Stephen around in a wheelchair (though she is not a war profiteer). We see how Stephen is affected by a mathematician in London (I was affected by maths in London – it’s a very expensive city). But we are never taken through his thought processes - they just ‘happen’.

Now a leading performance is defined by a character struggling against his condition. Leading men have ambition but they reconcile this with a challenging home life – or none at all. We want to watch leading men. They draw us in, even when they are unlikeable.

I wasn’t compelled by Redmayne’s Hawking.

The tension in his story is – will he beat his prognosis? The young Stephen is struck down by motor neurone disease (or Lou Gehrig’s disease as the film’s American audience is told) and he has but two years to live.

How does he beat these odds?

From the film, I couldn’t tell you. I would like to think that it’s all down to a desire to live, the fight in the dog, ideas fermenting needing to be explored and explained. Time needed to explore and explain them.

But I haven’t a clue. This isn’t the compelling part of the movie; it is not a classic ‘disability’ yarn in the manner of My Left Foot.

This is how the film actually works. ‘You have this awful disease, but together we can beat it, you and I. If I can get you to play croquet then I’m sure you can get your Ph. D and explain the mysteries of the universe, and what not.’

Finally, he believes in God, or does so for the sake of his theories.

You can see why the film is popular. It supports an existing value system. That’s not my beef with it (perhaps it should be). What annoys me is that I feel disconnected from its nominal protagonist. I feel cheated.

Character is, of course, revealed through action. But Stephen’s actions are reported. His family need help – and there’s a handsome man on hand to help him (Jane’s choir master).

If Mr Redmayne wins his Oscar, he could set a bad precedent – an award for being an inactive protagonist, a non-leader. Worse, it’ll encourage the casting of British actors in similar roles, actually setting us back.

In American films, British actors get to play the prime movers in a drama. Daniel Day Lewis couldn’t enjoy his career in British cinema alone. We would never have his thunderous performance as Daniel Plainview in There Will Be Blood if the view of British acting in Hollywood had been defined by Redmayne’s type of performance.

So, please AMPAS, don’t give him the Oscar. It will free up American pioneer roles for American actors.

Mind you, that might be just the reason he’ll win it.

The Theory of Everything is still on release. I saw it at Cineworld Wandsworth, South London, Monday 19 January 2015, 11:10am screening

Movie Review: ON THE BASIS OF SEX - When Family And Career Are Compatible

Movie Review: ON THE BASIS OF SEX - Photo credit:twitter.com,edition by Amber255 for bitLanders.com …