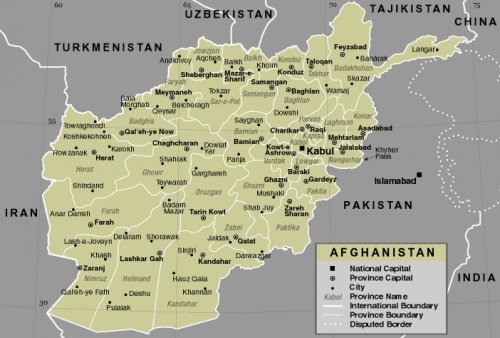 If you are asking why the allied forces are losing Afghanistan, this is the 5th consecutive year that civilian casualties have risen according to a UN Report It does not matter that such rise is largely attributed to “a change in tactics by the Taliban and other anti-Government forces.” READ – “Losing Afghanistan?” - diplomaticallyincorrect.org/films/blog_post/losing-afghanistan-by-ambassador-mo/36085 The annual Report on protection of civilians in armed conflict, prepared by the UN Assistance Mission in Afghanistan (UNAMA) and the Office of the UN High Commissioner for Human Rights (OHCHR), recorded 3,021 civilian deaths last year -- an increase of 8% from previous year. Since 2007, at least 11,864 civilians. "For much too long, Afghan civilians have paid the highest price of war. Parties to the conflict must greatly increase their efforts to protect civilians to prevent yet another increase in civilian deaths and injuries in 2012," according to Jan Kubis, the head of UNAMA and the Secretary-General''s Special Representative for Afghanistan. UN High Commissioner for Human Rights Navi Pillay described the figures as extremely worrying. "Behind these numbers is real suffering and loss for families in Afghanistan.” IED’s & Suicide Attacks Killing More Civilians – More than Allied Soldiers: Anti-Government forces were responsible for an increasingly large majority of the deaths, and last year accounted for 77% of all civilians who were killed. The report noted that the Taliban and related groups use improvised explosive devices (IEDs) more frequently and more widely, with the IEDs detonating whenever a person, including a child, steps on them or whenever a vehicle drives over them. Suicide attacks also led to higher death tolls, appeared increasingly to have targeted civilians. Aerial Attacks by Allies also Killed More Civilians: Civilians killed by pro-Government forces fell overall last year, but the number killed from aerial attacks rose. The report found that the conflict is playing an increasingly intrusive role in the day-to-day lives of Afghans, with nearly 200,000 people displaced last year by the fighting, thousands of others losing their livelihoods and property, and many more having their freedom of movement restricted because of the clashes. "Unremitting civilian casualties coupled with pervasive intimidation by parties to the conflict and an expanding number of pro- and anti-Government armed groups affected many Afghan civilians directly, and many more indirectly, by fueling uncertainty, tension and fear," according to the Report. While the Afghan Local Police had improved security in most areas where they operated, they also stood accused of human rights abuses against civilians in several districts. Read: - “UN Under Attack in Afghanistan” - diplomaticallyincorrect.org/films/blog_post/un-under-attack-in-afghanistan-by-ambassador-mo/39009 More Care/Accountability by International Forces & Training for Government Units: Report recommends for participants to the conflict, including urging anti-Government forces to stop using victim-activated pressure-plate IEDs, cease targeting civilians, hold accountable those members who kill and injure civilians and stop attacking places of worship. The Report calls on the Afghan Government to ensure its troops are trained adequately in tactics and procedures, particularly concerning alternatives to lethal forces, and to improve the recruitment and oversight of the Afghan Local Police. International units of Allied forces are called on to further review their procedures aimed at preventing any incidental loss of civilian life in the carrying out of military operations, especially aerial attacks, and to promote transparency and accountability when dealing with Afghan civilians and communities. See FILM Report – “What About Civilian Casualties?” diplomaticallyincorrect.org/films/movie/what-about-afghan-civilian-casualties/25888 Georgette Gagnon, the director of human rights at UNAMA, noted that new proposals have been put forward in recent months that could lead to a process of peace negotiations between the pro- and anti-Government sides. "To the Afghan people, the credibility and value of a negotiation process and progress toward peace will be measured by reduced civilian casualties and real improvements in security, particularly in conflict-affected areas. Only through increased actions to protect civilians will the relentless toll of death and injury to Afghan children, women and men be ended during and following a peace process." Read Great Way to Help Afghan Children & Freedom – “How Freedom Wins Free Market Place of Ideas?” - diplomaticallyincorrect.org/films/blog_post/how-freedom-wins-free-market-place-of-ideas/45229 Ambassador Muhamed Sacirbey - FOLLOW mo @MuhamedSacirbey Facebook-Become a Fan at “Diplomatically Incorrect”       Twitter – Follow us at DiplomaticallyX   Map: Courtesy afghan-network.net