During the past week the producers of Xcorps Action Sports and Music TV has been uploading non-stop to the Film Annex platform!  This latest list of new videos published includes a special automotive restoration film series called The BANDIT X Project!  This video series documents the complete rebuilding of a 1979 Pontiac Trans Am – a car like the one featured in the iconic feature film SMOKEY and the BANDIT starring Burt Reynolds.

This resto mod on a 1979 Trans Am is not your usual car show rebuild that is rushed through and takes a week or so just to make schedule! This mod took over a year of shooting and consists of not only a very custom top end paint job but also the rebuilding of the Pontiac 455 engine to about 450 hp by Greg Scott, a Schneider cam and SMI carb, upgrading the suspension from Pro Touring F-Body with tubular A-arms, heavier rear springs and adjustable shocks along with sub frame connectors, custom gauges by Guage Marks, a 400 4 speed transmission, A/C, pwr windows, 4 wheel disc brakes, AM/FM CB radio combo, dlx interior,  as well as a custom exhaust system from the inventor of the X PIPE Ed Hanson . Vroom Vroom!

So Cal Paint Works in Santee California – San Diego’s premier restoration shop did the paint and body on the project. After we saw some of the cars that they did we just had to have them do the Bandit X car!  See the Xcorps segment on this great resto shops Customer Appreciation Day for a look at some of the cars they have done! 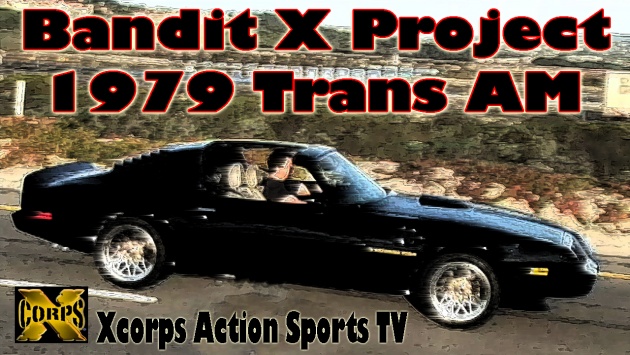 This BANDIT X video series is hosted by Xcorps reporter Scott Sommers who is a qualified pro mechanic himself!  He said, “If you like Trans Am’s you'll want to follow this whole project from start to finish because we covered the whole process from tear down to rebuild - taking almost 2 years to shoot.”

Stay Tuned!  Additional ACTION SPORTS and MUSIC episodes of Xcorps are now being uploaded to The FILM ANNEX platform!