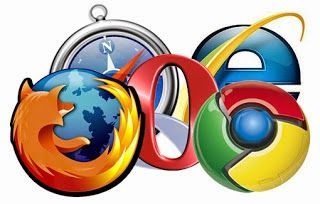 Just to
share information about the 20 Best Browser For PC.
For cyberspace activities must not be separated from this one tool that browser. Both are used to browsing for information, jobs, hobbies and others. And certainly we have a browser favorite among each, and my personal is still the same loyal Mozilla-Firefox for daily browsing needs.

1. Mozilla Firefox
Mozilla Firefox (originally named Phoenix and then for a moment known as Mozilla Firebird) is a cross-platform free web browser developed by the Mozilla Foundation and hundreds of volunteers.
Before the release of version 1.0 of its on 9 November 2004, the latest version is now launching the 2014 version 32.0
Detai+Download from here

2 Google Chrome
Google Chrome is an open source web browser developed by Google using the WebKit rendering engine. Open-source project called Chromium itself.
Google Chrome was first released by Google on September 2, 2008, and in January 2012, Google Chrome has managed to achieve an estimated 25-28% of the overall percentage of the user's browser, the browser makes a second or third also the most widely used after Mozilla Firefox, according to some sources.
Detai + Download from here

3. Opera
Opera began to be made in 1994 as a research project of Telenor, the largest telecommunications company in Norway. In 1995, Telanor branched out into a separate company named Opera Software ASA. Opera was first launched with version 2.0 in 1996.
Detai + Download from here

5. Safari
Safari is a web browser made ​​by Apple Inc. which was originally intended specifically for the Mac OS operating system. Safari installed with Mac OS X and is the default web browser in the operating system since Mac OS X v10.3. Previously from 1997 to 2003, Mac OS X using Internet Explorer for Mac as the default web browser. On June 11, 2007, for the preview version of Windows that is suitable for both Windows XP and Windows Vista than Safari was introduced at the Apple Worldwide Developers Conference in San Francisco.
Detai + Download from here

6. Comodo Dragon
Comodo Dragon is a Chromium-based web browser, which is also used by the browser made ​​by Google is Google Chrome. It was no surprise when both have the same look. Although they are different default theme.
Detai + Download from here

7 Coolnovo
CoolNovo is an internet browser based on Google Chrome, the advantages of Coolnovo is having enough features tempting to try. The feature is similar to Google Chrome there are only a few features that are devoted to CoolNovo only and not in Google Chrome.
Detai + Download from here

8. Maxthon
Maxthon is a browser that uses the IE engine owned, dividend, and 100% compatible with IE, coupled with a variety of features that are not owned by IE.
Detai + Download from here

9. Flock
Flock is a web browser that specializes in providing social networking features and other Web 2.0 features on the display interface. The browser was created using Mozilla's Firefox codebase On June 16, 2008.
Detai + Download from here

10 Avant Browser
Avant Browser is a browser that is fast, stable, user-friendly, and is a multiwindow browser. It is the engine used by IE engine. But Avant Browser has advantages compared to IE.
Detai + Download from here

11. Netscape Navigator
Netscape Navigator is a web browser that is famous in the 1990s and most widely used before the emergence of Internet Explorer from Microsoft, which is created by Netscape Corporation.
Detai + Download from here

12. QtWeb Browser
QtWeb is a secure web browser software, compact, fast, and portable user interface with some interesting, unique, and privacy features. QtWeb is free software, which is a non-commercial project and based on the open source Qt framework and Apple's Nokia's WebKit rendering engine (the same as used on safari Apple Safari and Google Chrome).
Detai + Download from here

13. SeaMonkey
The full Mozilla Firefox or SeaMonkey is an internet suite, which is a combination of a web browser to surf the Internet, e-mail clients to receive and send e-mails, news client to receive news and HTML editor to edit web pages using html.
On March 10, 2005, the Mozilla Foundation announced that it will issue a new official version of the Mozilla Application Suite after version 1.7.x, because it will be more focus on developing Internet applications that separate the Firefox and Thunderbird.
Detai + Download from here

14. K-Meleon
Browser to display a green lizard's head has properties and characteristics similar to firefox. This is because the developer originally was mozzila. Where the beginning of the browser development is intended to eventually be able to take the role as the fastest web browser and easy in use.

Browser developed since 2000 it has been entered in the K-Meleon version 1.1.3 (for portable use) .At this version of K-Meleon is integrated with the browser - Other browsers are quite familiar to us.
Detai + Download from here

16. SRWare Iron
SRWare Iron, or simply Iron, an open source web browser which is an implementation of the open source web browser Chromium with the goal to eliminate the primacy of user tracking and other tapping functions contained in Google Chrome. While Iron does not provide extra privacy compared to Chromium, but apply some additional features that distinguish it from Google Chrome, such as integrated AdBlocker.
Detai + Download from here

17. Konqueror
Konqueror is a web browser for KDE based Linux operating system. The web browser is a standard web browser on Linux. Besides can be used to prepare for the web browsing, Konqueror can also be used to browse the contents of a computer and can also be used as a universal document viewer.
In addition to supporting the standard functions, Konqueror also supports tabbed browsing, shell, and support the identity of the viewer's browser which can be converted to a large number of the name of the browser, such as Mozilla Firefox, and others.
Detai + Download from here

18. Slim Browser
SlimBrowser is a free web browser which is released under freeware license. It is free to use both invididual and commercial applications. It is free to be distributed over the Internet and / or through offline distribution channels as long as it is stored in its original form without any changes.
Detai + Download from here

19. Crazy Browser
Crazy Browser is a browser smallest and fastest ever, although there are smaller browsers like OffbyOne browser, but the browser does not fully support Javascript (which is now widely used by many web). So small it only requires a browser to 710K disks, making this a very fast browser can do instant load, so for those of you who do not want to linger long wait for loading your browser to move, and want to try something new, maybe you can try this crazy browser.
Detai + Download from here

This studio is dedicated in the development of software on the Windows platform. TheWorld Browser is one of our most important product.
Studio principle: Put the usability of software on top priority. And put yourself in the users forever.
Detai + Download from here

And there are many more types of browser that has been released by some providers and founder. Here I just share, and for your convenience when browsing please choose which you think is best.