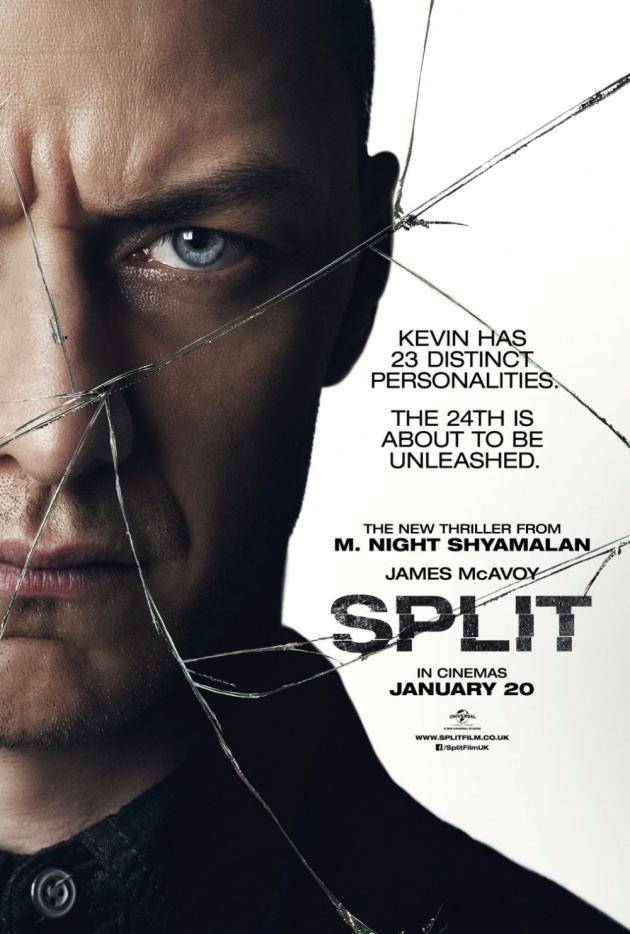 Dr. Fletcher: There must be limits to what a human being can become.

Hi Everyone! NellShaOza again! Before anything else visit my blogs - Nellshaoza's Blog. Today's blog is kind of unordinary compare to my other blogs, My interest lead me in this movie. After watching this I've wonder with an identity I have lol ~ I feel like this movie is something worth sharing for. So Here it is. Sit back, Relax and Be amaze ~

Split is a 2016 American psychological horror-thriller film which was first release on September 26, 2016 at Fantastic Fest and in cinema on January 20, 2017. It was Directed by M. Night Shyamalan

The film received generally positive reviews, with some critics labeling it a welcoming return for Shyamalan, although some criticized the film for its perceived stigmatization of mental illness. The film was also a massive financial success, grossing $276 million worldwide on a budget of $9 million.

It's co-movies under Universal Pictures are Les Miserables, The Birds, The Blues Brothers, Love Actually, Psycho, Warcraft, The Bourne Ultimatum and many more..

Split started with a person with a multiple personality disorder specifically 23 Personalities. Kevin was an ordinary man at first but something different inside. In relate with his multiple personalities, Kevin is has been through therapy - chat and talks by his psychiatrist, Dr. Karen Fletcher. But One of his persona came out from the inside of his mind, That been the leading one that talks to Dr. Karen, Barry the Designer.

However, the recent dominant persona was the most intelligent among all personalities, Dennis.

Unfortunately, Dennis did a wrong move that define this three young girls life, Claire, Marcia, and outsider Casey. It was an ordinary day for them when He kidnapped and brought them under his flat.

The Girls gone scared and terrified, They didn't think of anything but just to escape from this crazy man. Before they was able to properly absorb the situation another personality came out from the drastic mind. It was Patricia this time, He became feminine and like a woman as he talks and walks. 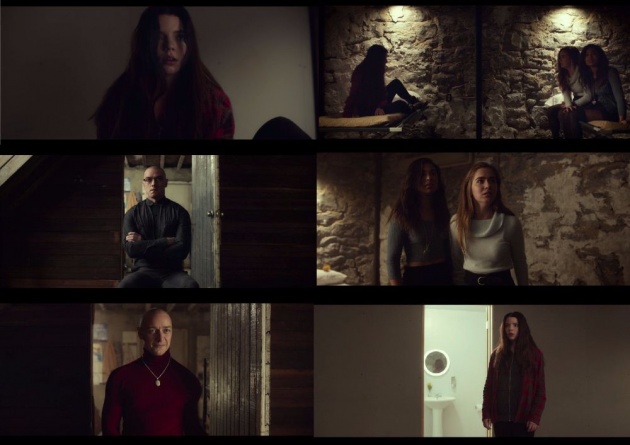 This made them confused and even frightened. The next one that came out within Kevin's mind is Hedwig, a young boy that intentionally became close to Chasey.

The three gave all of their power and mind just to be freed and escaped the frightening hell of this man. Chasey, thinks on how she'll manage to talk or trick Hedwig to help them in absconding.

Claire Benoit: I took six months of Kenpo karate class. And you distract the assailant with pain.

Casey Cooke: Everything is so easy for you guys. You do one thing, you can predict the next thing. It's not the way it's gonna be in this situation. 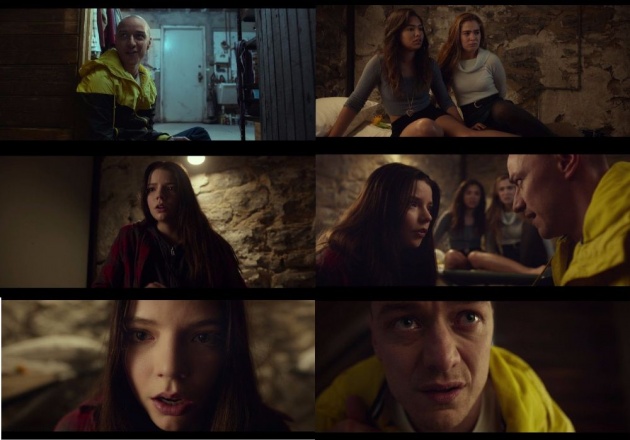 Little did they know, Things went much worse after some days of being prisoned. 23 personalities are already unleashed. and the next one would be the most terrifying one.. How would they escape and who is this last one? 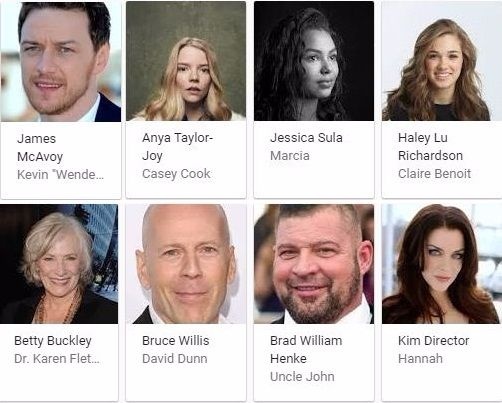 2. Casey Cooke - This Girl which also been into a traumatic situation, She is a outsider and not supposed to be kidnapped by Dennis.

3. Claire Benoit - Classmate of Casey which is a Sacrificial body to The Beast, She's also the one of motivate them to fight back and escape

4. Marcia - also a classmate of Casey and also a sacrifice.

I would lie if i would tell you that the actors sucks. Well, Indeed they did a really great job! Especially, James McAvoy. Think about a lot of characters that he need to portrayed at the same time, He really gave me the feeling of separate thought of the Personalities.

Honestly, I've been looking on his acting all the time and how he'll gave a sense of realistic in the Personality his showing. and Actually, I've enjoy those characters, From Patricia to Hedwig, A bald man portraying a Women haha! It's remarkable, trust me and also the 9 years old Hedwig! I've repeatedly watched the scenes and it never failed to amaze me.

Before I forgot, Anya Tayloy-Joy. Effortlessly show up her character, Her eyes speak all the emotions but at some point I can't pin point on what she's thinking, Nevertheless it is a good acting ~ 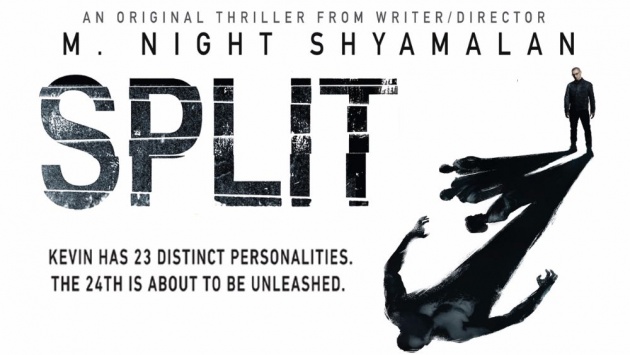 When I first saw the movie poster, a huge idea came in my mind. I am very familiar with Dissociative identity disorder or multiple personality disorder because of my friend's boyfriend, Her boyfriend has this case and for a very long time they kept it as a secret (I've share this to you cause you don't know her :p ) Her Boyfriend Doctor also kept this to their self. According to my friend, This guy has been in a traumatic past or traumatic childhood memories. He was beaten by someone he loves when he was young and that made him look himself low.

In relate with the movie, They also stated their that Kevin has been in a trauma. This provokes me to search and find more online, according to what I've search..

DID reflects a failure to integrate various aspects of identity, memory, and consciousness into a single multidimensional self. Usually, a primary identity carries the individual's given name and is passive, dependent, guilty, and depressed. When in control, each personality state, or alter, may be experienced as if it has a distinct history, self-image and identity. 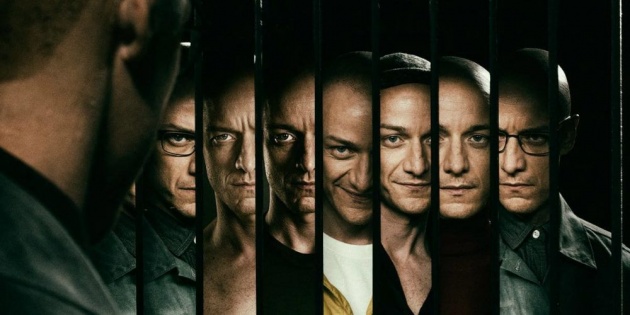 Her boyfriend has 5 common personality, and they also named it. This is to tame Him whenever he was attacked by his disorder. Larry, Caloy, Jessica, J (Don't know) and K (I don't remember, Pardon ~)

Like in the movie He also have the Childhood version of himself, an Intelligent one and of course the woman. but unlike in the movie, He is not that dangerous and his personalities know that if they'll do something stupid or reckless, He will be in trouble and they don't want that to happen. Sounds Hilarious right? But its true and in current research.

I would like to mention his active Persona. Actually I was excited to watched this movie when it first came out in cinemas but I didn't have the chance. So I know, you know that My interest magnetized by this personalities. I thinks it's cool and at the same time bothering. Imagine yourself talking to a friend and suddenly he or she'll forget what you two are talking about and he'll transform to someone you don't know.

Barry: He is a fashion designer who loves sketching photos. This made him the spoke person for his very light and warm approach.

Dennis: He is a Meticulous, He has obsessive-compulsive disorder.

Patricia: The Woman which believe to The Beast

The Beast: The most powerful and hideous one.

I recommend this to some people who loves playing with minds and acknowledging the mystery of person's mind. For some people, This might be boring and pure of talks but it is indeed a very worth to watch movie. The settings and place is creepy that makes the story more creepier. It's a very dark and brutals, The scenes are also unexpected, Like what I did, I've close my eyes and wait what will happened, IF YOU WANT TO GET THE SAME FEELING, DO NOT READ THE ENDING.

Scary and dark and shocking. They became more creepier. The finale when she is walking outside with a unknown person completed all the questions that was bothering in my mind. Not so Satisfying Ending but the Whole movie is worth a watch..

The Beast: You are different from the rest. Your heart is pure! Rejoice! The broken are the more evolved. Rejoice.

So Here is my another short blog, Dark and Evil.

Change Theme for the next ^_^

SEE YOU ON THE NEXT!

The Role of Therapists in Treating Mental Health Problems

Mental health is a controversial topic because of the stigma associated with it. Some people immedia…

Mental health is a term often misunderstood. When people hear this term, they immediately equate it …