2017 American romantic science fiction film: The Space Between Us 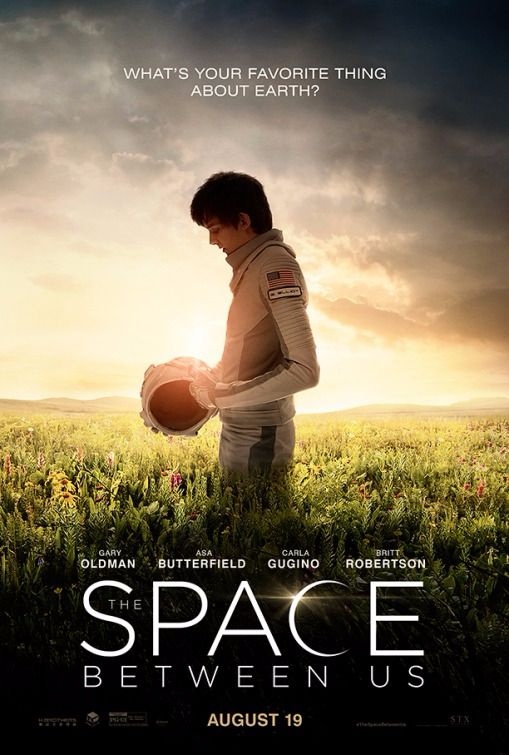 Image Source: The Space Between Us via impawards.com

Hi Hello!! NellShaOza here! another movie blog for all of you! ^_^ Visit the others, Click me! ^_^ I've watched this last week and I'm willing to share some briefs ideas about it. Sit back, relax and Have fun Everyone!

The Space between Us is a 2017 American romantic science fiction film. It was released on February 3, 2017. Its running time is approximately 121 minutes. It was directed by Peter Chelsom.

Principal photography began on September 14, 2015, in Albuquerque, New Mexico. The film was released on February 3, 2017 by STX Entertainment. It received negative reviews from critics and was a box office bomb, grossing $14.8 million against its $30 million budget.

-The Space between us via Wikipedia

Space between us was produced by Richard Barton Lewis. It's Production company are Huayi Brothers Pictures, Los Angeles Media Fund, Southpaw Entertainment and Scarlet Fire Entertainment. Distributed by STX Entertainment. Space between Us co movies are Free state of Jones, Bad Moms, The Gift, Secret in their eyes, The Boy, The Edge of Seventeen, Valerian and the city of thousand planets and many more.

Video Source: The Space between us Trailer via Film trailer zone Youtube Channel

STORY OF SPACE BETWEEN US

Once there was a Team of astronauts who planned to be the first humans who will live in Mars using a artificial home which was called the East Texas. The Project was implemented by Nathaniel Shepard, His dream is to colonize Mars for people to learn to live there. The Team was leaded by Sarah Elliot. As what Nathaniel said,

I wanted to go to Mars. Not just a visit, I want to live there. Because then I'd be living truth that life on Mars Is possible. Proof that if we had to, Mankind can make a fresh start. We're in trouble and it's our fault, and we're running out of time, and mother nature doesn't negotiate. We can't give up, not now. Mars is a planet, ripe and ready for life. Earth's resources might be depleted but there is one resource we must never neglect. It's the most valuable, and it's the one without limits. Courage.

The Rocket was launched, The mission was started. Everyone was happy and excited, Everyone believes that people will eventually embrace the fact of Mars can give hope in humans. However when things are going according to plan, Team Leader Sarah Elliot was verified being pregnant 2 months after the Mission was launches.

Additional Mission was inputed in the middle of discussion, The priority was changed. When they was finally landed on Mars, They proceed in giving birth to Sarah, a child which would probably the First Human born in Mars. Unfortunately, Sarah come out with complications, She died right after giving birth to Gardner Elliot. 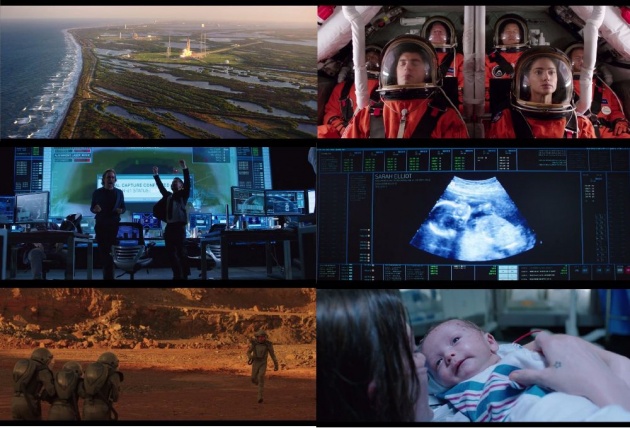 16 years later, Gardner grew into a intelligent and smart kid, as what he always says "Raised by scientist" that he uses this to trick and manipulate the people and machine around him. He live his entire life being stuck in the East Texas which is always under monitoring and with his Artificial Intelligence best friend.

He also meet his only friend in Earth, her name is Tulsa. He told Tulsa that they can't be together for the reason of he has a disease and he cannot leave house premises yet.

Later on, Gardner wants to meet Earth and find his father to filled the lack of care from his deceased mother. and also to meet Tulsa for the first time. At first, they sway hands for Kendra Wyndham request because of the risk on health that Gardner might encounter when he landed earth.

Eventually Gardner steps out to Earth and learned the difference between Earth and Mars. He escaped from his friendly Quarantine to Meet Tulsa. They shared moments and adventure started to bloom. The Best day that happen to Gardner is when he was with Tulsa all the way. 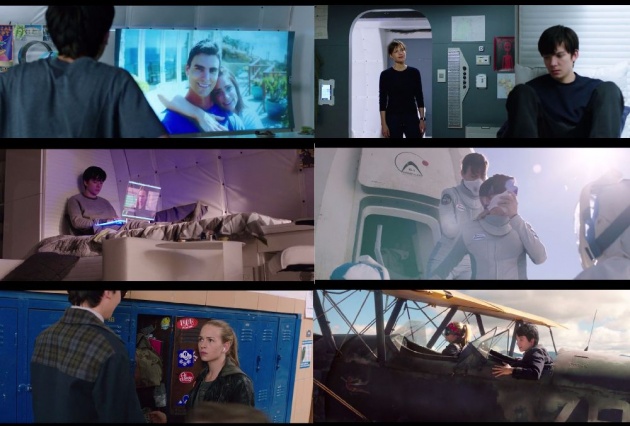 I was *so* scarred, I wouldn't know how to be human. You make me human, Tulsa. 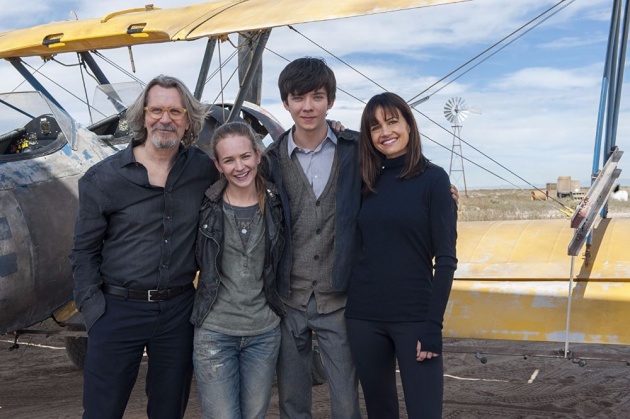 Image Source: Space between us cast via imdb.com

1. Gardner Elliot - Main Character in the Story. The First human who was born on Mars. Son of Former Leading Astronaut, Sarah Elliot.

2. Tulsa - Gardner's love interest. His only friend in Earth. Not a typical High School Girl, Loves adventure and very smart.

3. Kendra Wyndham - Gardner's stand up mother who guide him in his decisions. She was a astronaut who was designated in the mission.

4. Nathaniel Shepherd - The man who started the Live on Mars mission. He takes full responsibility to Gardner and did everything to make Gardner safe.

Asa Butterfield is one of the effective actor I've seen so far. He makes me believe that he really can manipulate things using his knowledge and skills. (Well, some actors doesn't really makes me feel the FEELING) His height and face is very a like in a human who was born in Mars, Long bones and 'Blue contracting in the Light' eyes.His body built and the way he moves in the movie, gave such a "Ow! He really does looks a human from mars" Thumbs up for his acting skills :D

I also admired Brit Robertson character in the movie, at first when I watched the trailer, I judge here beauty and I think I've been in misconception part where in I do not like her. but when I watched the film, I was really waiting for her reactions with Gardner's silly act. I want to see how a strong independent teen holds her emotions for a visitor from mars who is confuse here in earth. also an effective actress. Kudos!

Carla Gugino looks really a smart and full of knowledge Astronaut who is ready to embrace in being a mother to Gardner. I've seen her in some movies and I know if she is one of the cast, She can also bring to us the character's feeling. On the other hand, Gary Oldman seems pushed the acting to the limit where in its not good to watch (sorry) In my own opinion, He has lacked of eye emotions. Just my opinion!

The way the space agency plans to do this is by using a giant magnet to alter the Red Planet's atmosphere so people could survive on it.

According to Metro, James Green, director of NASA's Planetary Science Division, has revealed that the magnet could create an artificial magnetosphere between Mars and the sun, which would protect the planet from the sun's harmful radiation and solar wind. 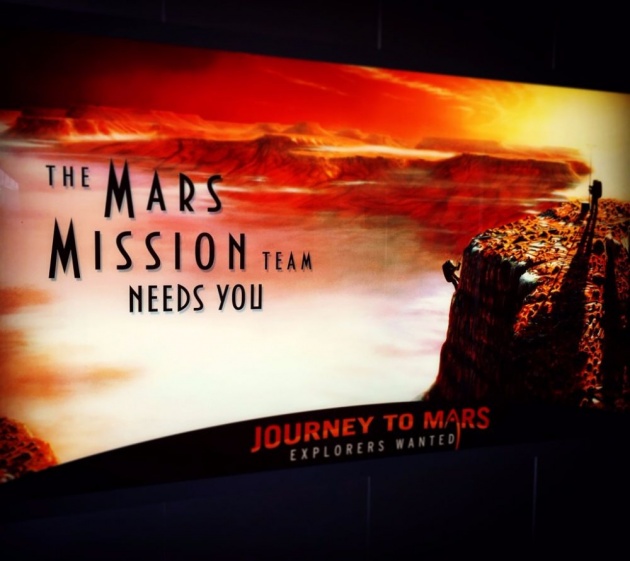 It is Mars One's goal to establish a human settlement on Mars.

Human settlement of Mars is the next giant leap for humankind. Exploring the solar system as a united humanity will bring us all closer together.

Mars is the stepping stone of the human race on its voyage into the universe. Human settlement on Mars will aid our understanding of the origins of the solar system, the origins of life and our place in the universe. As with the Apollo Moon landings, a human mission to Mars will inspire generations to believe that all things are possible, anything can be achieved.

As you can observed in the movie, Oxygen through the atmosphere of Mars is still not available, The scene where Gardner crashed the automobile and left his suit damaged. even its a Science Fiction they cannot define things if it is still in discovering. Oxygen is not yet near for human in Mars. They used Astronaut suits to survive, So can we consider them as if they living on Mars? For Me, NO. I cannot consider them as the First human live in Mars until they can live them as what the living here in Earth.

The movie also makes me excited by the Fact that we can be transferred to Mars and Live their but I am also aware to the fact that it would take years and years and years to make it possible and only the people who are trained to live there would be the privileged one. 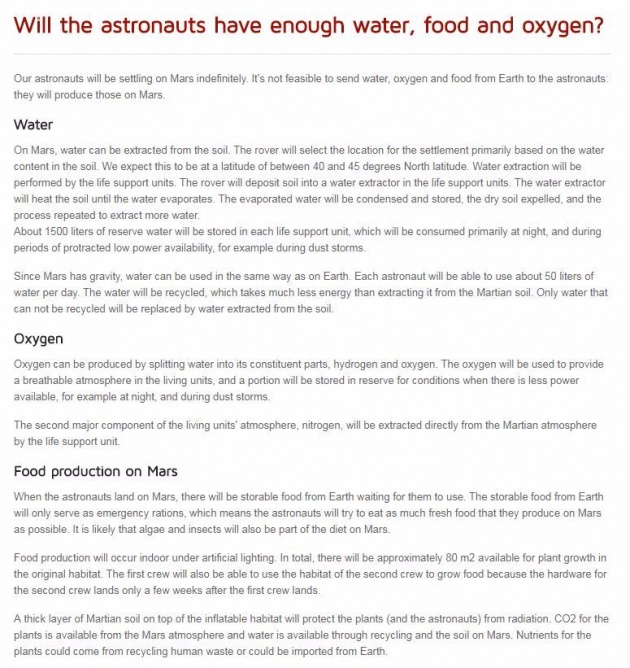 In the movie, they didn't acknowledge about these little things. They focus on the Drama and feeling of living in the Mars which I think is a Good thing (This is not a Educational Movie) Good thing for the reason of they make us appreciate our Little Planet, Earth. That someone from the outside of this Planet wants to live here then what us, human do? Destroy and nonchalantly breaks it without as noticing it.

The movie gave me enjoyment and satisfaction. The Chemistry of the two crossed space lovers is nice and simple, thought I was shocked in the middle part where in they did something that Gardner should learn last thing on Earth hehe watch it and you'll know.

I recommend this for Friend Squad and some how for family leisure time.

Video Source: The Space between us cast interview via Clevver News Youtube Channel

So how was it? hehe Leave down comments below :)

Try to watch it ~