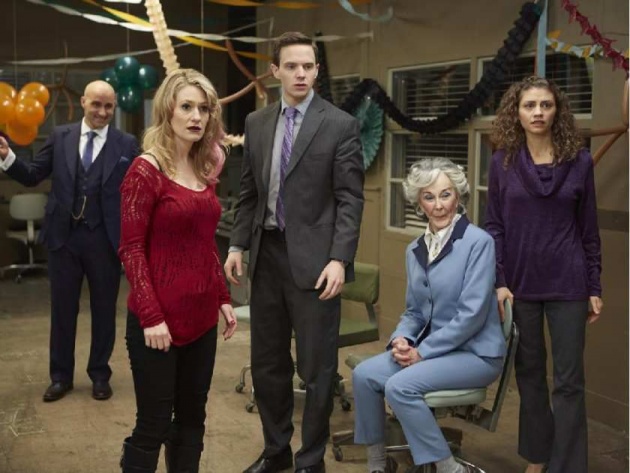 How many films, plays and novels have been written by women about the end of the world? My initial presumption is that they have far more important things to worry about. The real reason - without being flip - is that there aren’t any feminist utopian texts either. However, to go back to dystopia, only Margaret Atwood’s The Handmaid’s Tale, Suzanne Collins’ The Hunger Games and P.D. James’ Children of Men spring to mind. In any case, women didn’t write novels about the nuclear threat – they protested vigorously outside army bases instead, as the Greenham Common women proved to their credit in the early 1980s.

End of Days, Inc, a black comedy written by Christina Ray and directed by Jennifer Liao, is a rare example, especially as the films of all the above novels were made by men. Ostensibly it is an office comedy, in which the four employees of Godfrey Global Inventory are invited to a party on their last day of work. Misty (Janet Porter) would like to go on a cruise, or have sex with the handsome delivery guy in the stationery cupboard, whichever comes first – the cruise is more likely. Perky singleton Janet (Carolyne Maraghi) who lives at home with her grandmother is bitterly disappointed. Get-ahead brown-noser Jason (Mark O’Brien) wants to continue his relationship with the boss after the company folds, whilst hard-working Mort (Paul Sun-Hyung Lee) wants recognition for his eleven year service and doesn’t have the inclination for a party.

Their employer, Mr Godfrey (Paulino Nunes) who runs the company with his much older sister, Esther (Anna Ferguson) is no ordinary capitalist and Godfrey Global Inventory no ordinary company. The time-cards that the employees dispose of between party games represent whole nations. As the cards are destroyed, fire rages outside. Natural disasters occur. Strangely, the power supply doesn’t fade.

It takes a while for the employees to twig that something is up and only do so after Mort ends up dead – the name is a give-away. He is in fact returned to the group but is unable to perform to his optimum capacity. Once they realise something is wrong, the group tries to take back control by luring Esther away from the company’s only working phone, recruiting the cleaning lady, Oola (Yulia Petrauskas) to their cause.

There is some gore – but the film makes light of the end of civilization as we know it. Don McKellar’s 1998 film, Last Night, about a group of Toronto citizens who await The End, is an interesting point of comparison.

The central joke is as much about visions of the end of the world as it is about how the characters react. It is entirely understandable that the end would be brought about by activity in an office rather than missiles, religious difference or itchy dictators from Asia. It is where most of the middle class spend their time, in front of computer screens.

How funny is it? Mort’s transformation provides some mild chuckles, as does Misty summoning her colleagues for a meeting in the afore-mentioned broom cupboard, where Mort discovers a used condom and investigates its properties. Interestingly the film isn’t about a moral descent for earthly riches. It is about the struggle against a fait accompli – or whatever they call it in French speaking Canada. Times are allotted for party games (‘duck, duck, goose’) and questions and answers where employees are also quizzed.

The performances are heightened in a way that is perfectly acceptable in a comedy. I mean, you can’t do ‘end of the world’ and naturalism – what can you measure it against? I guess we’ll never know. Paulino Nunes is the spitting image of Stanley Tucci, who has played his share of bad guys and Jason is as morally loose as men with his aspirations usually are in American comedies.

The more interesting question is this: to what extent does Canada produce commercial cinema? Whilst Canadian production companies and individuals produce high-grossing films, these movies (like Bob Clark’s Porky’s in 1982) aren’t identified as Canadian. End of Days, Inc exists in an odd niche. It is unashamedly Canadian and aimed at a domestic market. It is also too tame to compete with American black comedies like This Is The End – and certainly doesn’t have the star power or production budget. Even one of the best known Canadian English language movies, The Terry Fox Story, is a television movie, though released in the UK in cinemas. Jennifer Liao isn’t working in a domestic industry that offers huge commercial returns. Nor is she an ‘arthouse’ director like Don McKellar, Patricia Rozema or Denys Arcand. It will be interesting to track the career that she has and the extent to which the Canadian Film Industry can nurture more mainstream talent.