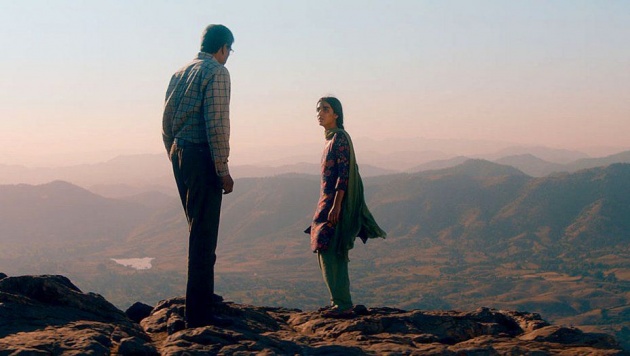 Pictured: the 'impossible demand' that father (Adil Hussain) makes of Nisha (Maria Mozhdah) in the Norwegian film 'What Will People Say?' written and directed by Iram Haq. Still courtesy of Mer Films

Children of migrants are caught between two cultures: the culture of the land that their parents left behind and the culture of their adoptive country. These can be at odds. In the worst case, one culture can despise another, thinking of the host as corrupt and morally bankrupt. This even before religion enters into the discussion.

This tension is explored in Norway-based, Pakistan migrant Iram Haq’s second film as writer-director, What Will People Say? (Hva vil folk si?) A contemporary story – mobile phones and social media play a part – it is based on Haq’s own experience of being sent against her will to Pakistan for a year aged 14 in 1990.

Haq’s hero is Nisha (Maria Mozhdah) a sixteen year old girl born to Pakistani parents but living in Norway. At the start of the film we see her running in the street as her father (Adil Hussain) moves from room to room checking on his sleeping children. Eventually he finds her in bed. Father adores Nisha, whom he gives a 1000 krone note (roughly GB £90 or US $120) after daughter brings him some sweets on her birthday. At a family gathering, Nisha dances next to her father. It is a joyous moment – a rare one in the light of what follows – but mother believes that Nisha cast the family in a bad way.

Nisha has a group of (white) friends including a Norwegian guy who she sort of likes. One night, the Nordic Romeo scales the wall of her house and climbs through her bedroom window. They kiss. But the hapless guy left his mobile phone on. It rings and Father comes running, beating the boy.

After a family discussion, Nisha is taken by her father and brother for a drive. Only it isn’t to the shops. Sensing something bad will happen, Nisha makes a dash at some traffic lights. She is caught. Taken to an airport, father keeps hold of her hand as they check in for a flight to Islamabad. Before we know, she is taking a bus from Islamabad, seeing her first transvestite egg seller. Nisha ends up meeting her father’s family in a town 350 miles from the nearest airport. She tries to run away unsuccessfully – the streets are narrow and a group of men in one corner obviously mean no good. Her aunt takes her shopping, employing a tried and tested haggling technique of insulting the produce. Nisha glances at an internet cafe, which during one shopping expedition she visits. Although she has enough time to send a Facebook message, sadly, she is caught. In a poignant image, Nisha watches her Norwegian passport being burnt; though if I was in the shoes of Nisha’s father, I would have kept it as an important identity document.

Pictured: Nisha (Maria Mozhdah) and her father (Adil Hussain) in 'What Will People Say' written and directed by Iram Haq. Still courtesy of Mer Films.

In the early part of the film as she stands at check in, we wonder why Nisha doesn’t cry for help. There is an inherent problem in transposing behaviour from 1990 into 2017. Teenagers today have more experience of what acceptable behaviour is. They have slightly more self confidence aged 16 than at aged 14. Indeed, at aged 14, being with a boy (especially an older one) would be more problematic no matter what culture you are from. Nevertheless, we are ‘with’ Nisha. We want her to escape the family who offer little more than scorn. I did feel sorry from Nisha’s younger cousin, who idolises her to some extent and takes her to the roof of the building to watch others flying kites. Youth culture, roof culture – in Pakistan, it’s the same thing.

Nisha has a male cousin who sort of likes her. He takes her for a walk after dark. However, they are caught kissing by a trio of policemen. If the film attacks anyone, it is Pakistani policeman who abuse their position of moral authority to hit the boy and force Nisha to strip, taking compromising photographs with which they blackmail the family for 20,000 rupees. You might think that someone in Nisha’s aunt’s family would use a camera phone to record the police doing this and then prosecute the policemen for blackmail and coercing a young girl to strip. However, Nisha’s aunt, etc, are all scared. They pay up. The police are all powerful. The family just wants to live without shame.

This incident is the final straw. Nisha’s father is called and told to take her away, which he does. On the journey to the airport, they stop off for something to eat. Nisha’s father takes her off-road to a clearing where he makes an unacceptable demand.

At this point our sympathy for the father is next to nil, but the story has a way to go, even if it doesn’t answer the question: how easy is it to get a replacement Norwegian passport?

There is no ‘happy ending’ in What Will People Say but it does explore how South Asian immigrant families deal with the disappointment of their children. The impasse between two cultures and two generations isn’t solved. Haq doesn’t demonise the father but she doesn’t give him a scene to explain himself either. As for Nisha’s brother, he doesn’t come out very well.

If there is no resolution, there is at least hope: hope that Nisha can escape the demands made on her and not be defined by a society that makes her feel ashamed. As one (white) character says, ‘you’ve not done anything wrong.’ The film looks at the extent in which the host state can intervene in such cases, but Nisha is affected by the censor in her head, that stops her from denouncing her family.

Although Haq’s film is simplistic, it raises complicated issues. In this regard, it is worth seeing. In Latin America, ‘imperfect cinema’ – films that don’t have closure and do not attempt to seduce the viewer with illusion – the audience is expected to debate the topic afterwards. Haq’s film, imperfect in itself, also does this.

The trailer can be viewed through this link: https://www.youtube.com/watch?v=b8_dBOzufWQ