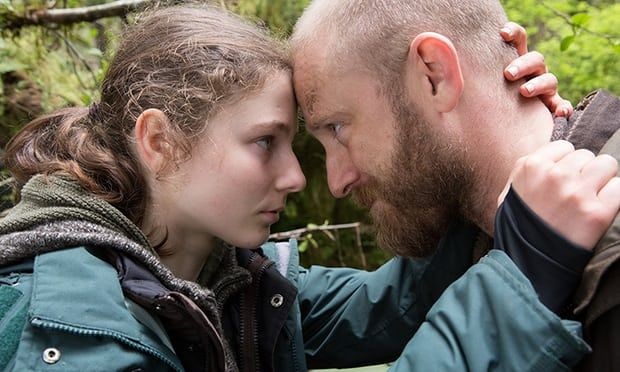 Pictured: Tom (Thomasin Harcourt McKenzie) and Will (Ben Foster) in 'Leave No Trace', a film directed by Debra Granik that explores a father and daughter making it on their own. Still courtesy of Bleecker Street (US) / Sony (UK)

For many cinema-goers, the defining portrayal of post traumatic stress disorder experienced by a veteran of military combat features in First Blood, a 1982 film starring Sylvester Stallone that introduced us to John Rambo. In a movie franchise of dubious quality, Rambo subsequently fought the wars that America never got right: Vietnam, Afghanistan and Burma. We rejoiced in the comic book violence that resulted as Stallone’s ridiculously pumped body participated in a series of over-the-top action sequences. It was no surprise that Stallone himself was prompted to write a screenplay, fittingly entitled Over the Top - this also referred to his salary.

Post traumatic stress disorder is very real and very serious. In the United States, the Veterans Association and the US Department of Veteran Affairs struggle to administer to the needs of thousands of combat veterans and their families as former soldiers, marines and air force personnel transition to civilian life. The Veterans ‘market’ is fragmented with organisations like Vietnam Veterans of America and Native American Veterans Association. It is clear that no one organisation helps all; that adjustment to normal life is seen not only through the prism of experience on the battlefield, but also through one’s ethnic background and subsequent disability, the latter as assisted by organisations like the Paralyzed Veterans of America.

In popular cinema, veterans are seen as dormant volcanoes, reverting to violent ways. They are vigilantes or psychopaths – sometimes both. The story of the veteran who opts out, who makes peace with the world by living in parallel to it, is rarely told, but is the subject of Leave No Trace, an adaptation by director Debra Granik and co-writer Anne Rosellini of Peter Rock’s novel ‘My Abandonment’, published in 2009.

Granik’s second feature, the 2010 release Winter’s Bone gave Jennifer Lawrence her first leading role as a teenager living in abject poverty who is forced to find her missing father (John Hawkes) to prevent her family from being evicted. Granik followed it with a documentary, Stray Dog (2014) about a Vietnam War veteran, Ron Hall, who takes a trip to meet his Mexican wife’s children. Leave No Trace typifies Granik’s work: it is about an opt-outer (rather than an outcast), who forges his own way, asking little of others but in conflict with the world because he has a teenage daughter for whom living in a national park is not her choice.

Granik – and the audience – sympathise utterly with Will (Ben Foster) a bearded veteran of an unspecified conflict who has made a life for himself and his teenage daughter Tom (Thomasin Harcourt McKenzie) in a national park in Portland, Oregon. They try as hard as possible to live on what is around them, supplementing their diet when Will goes to town to collect his veteran’s medication, which he then sells.

The first image of the film is very subtle but foreshadows Granik’s approach: it is a close-up of mossy branches in a peace symbol. This is the opposite of a war movie: no fighting, no violence of any kind. Will and Tom forage but they don’t hunt.

In a series of short scenes notable for the love and camaraderie that Will and Tom express towards each other, we see how they live, collecting wood in the forest. Tom whittles a stick down so it is easier to catch fire. They eat eggs and use the shell to adorn their garden. They fry mushrooms and practice a drill, Tom hiding from Will.

‘You’re burned,’ he tells her. ‘Your socks burned you.’

Tom reads – Will hasn’t neglected her education. They are at pains not to use the propane gas, which is of limited supply. They share a tent and beat its edges to scare away dogs. They live undetected whilst a few hundred metres away, workmen saw their way through the park.  It is only when Tom is out one day that she is spotted. A jogger calls to her. She does not respond.

From their point of view, Will and Tom’s existence is natural. From an outside perspective, Tom is kept in the woods against her will, denied the comforts of a real home and a proper education.

A search party discovers their camp; Will and Tom flee. Will is caught, complying entirely with the request. Tom, who has learned to hide, surrenders only when Will asks. ‘Comply,’ he says, ‘we’ve done nothing wrong.’

The pair is separated. Tom is kept in a room with two other teenage girls who are preparing a dream chart. Tom knows nothing of the pop stars and teen pin-ups pinned to cardboard. It is not her world.

Will is given a test, ostensibly to assess his mental state. He struggles with the ‘true or false’ questions he is given, recited on a tape – he cannot keep up. A man helps. The questions focus on how he feels about the day and whether he believes in some form of apocalypse: they reflect some of the out-there conspiracy theories that veterans adopt.

The pair is reunited. Tom confesses that she was seen but didn’t think to mention it. Her voice is tinged with guilt. They are taken to a home in the woods, a proper house with electricity, though Will has no interest in television – he hides it in the cupboard.

Whilst Tom goes to school, Will goes to work, preparing Christmas trees for export to Los Angeles, learning to clip their tops. They go to church but Will doesn’t have much to say to the priest. Tom is shown how to wave flags by a troupe of elderly women who perform for the congregation.

Tom makes friends with a boy and is shown rabbit club. The first rule of rabbit club is: prepare your bunny; Fight Club references have no place in the movie. 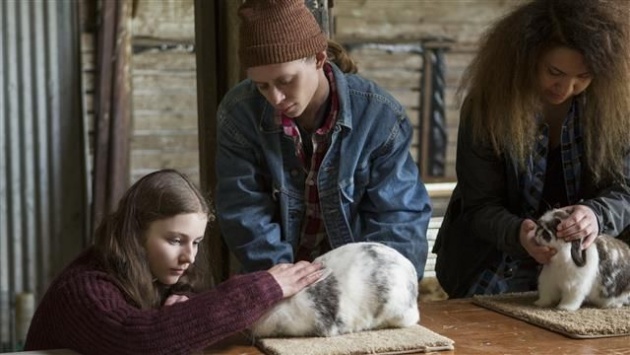 Pictured: Welcome to Rabbit Club. Tom (Thomasin Harcourt McKenzie) gets to know a rabbit in 'Leave No Trace'. Still courtesy of Bleecker Street (US) / Sony (UK)

Will does not trust domesticity. He equates their life to being under surveillance. We know he has nightmares – in an early scene, the sound of helicopters alarms him. We also know he likes chocolate. In a store during their trip to town, Tom asks ‘want or need’. ‘Want,’ replies Will referring to a chocolate bar.

Will decides to leave and summons Tom to come with him. They make their way in cold weather to a deserted cabin. They break in.  Will goes out to forage – and doesn’t come back.

In the second half of the film, Tom proves to be the stronger of the two. They receive help from a group who live in mobile homes in the forest and sing songs. Tom pays rent to the woman that assists them. She wants to stay, to lay down roots. Will is restless.

Leave No Trace is both a coming-of-age film and a quiet drama about the inability of veterans to settle. The stakes are not artificially hyped, but the film deals with real trauma, real pain, not filtered through media hyperbole. It is also a parallel kind of cinema that does not attempt to emotionally manipulate the audience but instead shows us how people live in order to show us how it is possible to life without society’s restrictions. The central performances are naturalistic rather than making a claim for awards. If the film helps one audience member to better understand the plight of veterans, it has done its job.