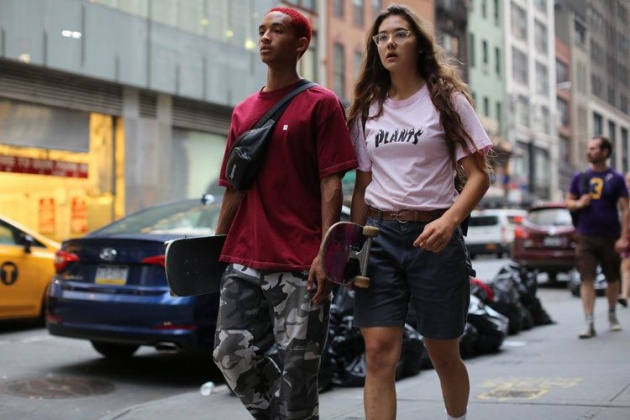 How do you follow the astonishing 2015 documentary, The Wolfpack, about a group of siblings, the Angulos, imprisoned in their New York apartment by their Peruvian immigrant father and finding solace by acting out scenes from VHS copies of movies? As it turns out, director Crystal Moselle hooked up a group of skateboarding girls, founded by Rachelle Vinberg, put them in a short film made for the Italian fashion house Miu Miu and then developed a fiction film, Skate Kitchen based on their personal stories.

The result is a film that doesn’t have the ‘wow factor’ of Moselle’s debut but seduces the viewer through a naturalistic portrayal of girls hanging out, skating, telling stories, smoking through a banana (yes, really) and partying, where the guests have wandering hands.

These hands are a little too much for Moselle’s bespectacled protagonist, Camille (played by Vinberg) who rebels against her mother (Elizabeth Rodriguez) to hang out with a group of skateboarding girls from across town (LES Park by Manhattan Bridge, to be precise). She finds that she has to keep a secret when she starts doing skateboard tricks for ‘boarder and amateur photographer, Devon (Jaden Smith, complete with red bleached hair).

The opening certainly pulls us in, as we learn about ‘credit carding’. I don’t think you want to know, but this is when you land awkwardly after a skate trick with the board going between your legs, like far between. Skateboarding on her lonesome, Camille lands awkwardly and discovers that she is bleeding profusely. ‘You are lucky,’ her mom tells her. That kind of injury could stop her having babies. We see Camille get stitches in hospital and hobble home. When mom puts on the television and tries to interest Camille in a telenovela (did I say she was Latina) Camille looks at skateboarding videos on YouTube instead. If mom really wanted to control Camille she would cut off her access to the internet.

We follow Camille as she crosses town, enamoured by a skateboard group. One of them says to camera, ‘your mother is a whore’, which is coincidentally that character’s final line; who needs a character arc when you can go full circle? When Camille arrives in Manhattan, she doesn’t know where the park is. It’s not like she has Google Maps – wait, she has a mobile. At any rate, she sees a skateboarding youth and decides to follow him.

If there is one thing we learn about skateboarders it is that they are territorial. Camille’s tentative moves at the skate park are viewed with suspicion. But then a girl recognises her from one of Camille’s videos. (Wait, she posted videos?) That’s an in. Plus she’s a girl. It’s all girls together.

The most outspoken of the group is Kurt (Nina Moran, the film’s break out star). Kurt doesn’t have a filter. ‘I like pussy. What do you like?’ she prods Camille. Camille ‘doesn’t know’ what kind of boys she likes, but it is fair guess that she really hates that little kid who goaded her to skate down some stairs resulting in her credit carding. 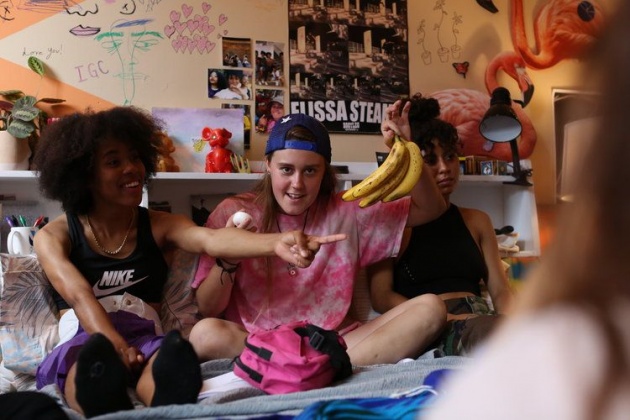 Pictured: What can you do with a bunch of bananas? Kurt (Nina Moran) holds some aloft in 'Skate Kitchen', a drama co-written and directed by Crystal Moselle. Still courtesy of Moderns Films (UK), Magnolia Releasing (US)

When Camille arrives home late, she receives the full wrath of her mom. ‘Why don’t you answer your phone?’ It’s a question many parents ask, next to ‘when are you going to wash your feet?’ Camille is ostensibly grounded but is obliged to sneak out.

She makes an unexpected friend in Janay (Ardelia Lovelace), whose father couldn’t be more different from Camille’s mom. I mean, he sees the girls smoking a joint and says nothing. Better yet, he offers them lasagne. ‘How ‘bout you, Camille, you like lasagne?’ As Janay explains, he is totally cool. She asks for stuff, he gets it.

After Camille’s mom tracks Camille down to the park – those YouTube videos are a giveaway – Camille fetches her stuff and moves in with Janay. Janay has been wounded in love by Devon. She wanted something more, but he didn’t want to give. We don’t know if it is because he has doubts about his sexuality or whether his father will give him grief. (‘What, you went with the first skateboarder you saw?’) I suppose Moselle is making a point that boys don’t confess themselves to girls unless they want sex – you know the old ‘wounded soul’ routine. At any rate, Devon comes across as more of a photography student putting together a portfolio, albeit one with a dubious group of friends who mix watching skateboard videos with porn. The film is a real test for movie classification boards.

Camille is obliged to get a job and gets one at a supermarket. She receives specific instructions. ‘If a coupon is out of date, don’t accept. Don’t take any s-t.’ Devon works at the same supermarket, in the stock room. He blows mostly cold, though eventually Camille performs board-flipping tricks for him on top of a tall building. For about a minute, my heart was in my metaphorical mouth, an expression that I think it is derived from individuals biting their own shirt pockets. If that isn’t the origin, it should be.

Camille hangs out with Devon’s male friends in scenes where there is real danger, in particular when the group elicits the ire of two security guards. One of the skateboards is confiscated. Camille pleads to get it back. It’s her board; she loaned it to that guy. The guard feels pity, but then Camille does a (skateboard) trick and pisses him off. Not great for retaining our sympathy, but Camille wants to show that she is suitably bad ass. 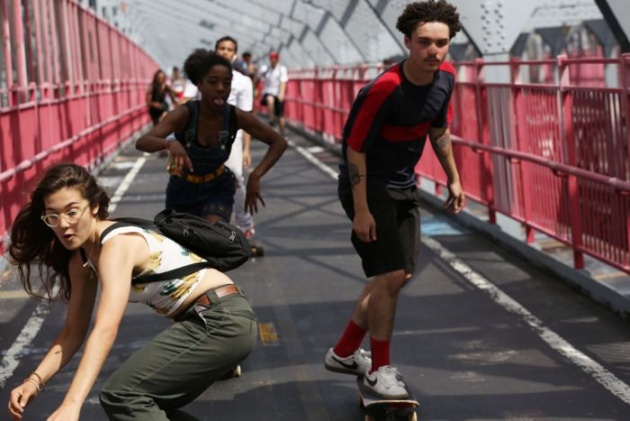 Camille isn’t the only one who has a bad accident skateboarding down some stairs. Janay does so too. She ends up bedbound, which really bums her out. Unbeknownst to her, Camille is hanging with Devon. Then one of the girls finds out about it - those Instagram photos, dammit. Crunch time!

You can’t choose your parents

The film plays with the idea of girl groups offering an alternative family. Through them, Camille learns that tampons won’t kill her – she sees one for the first time. She also learns to apologise and to forgive and she can even teach her mom how to balance on a board.

Does she get back with the girls? The suggestion is, possibly. You could equally read the final shot of the film as a flashback – happier times. I don’t know if this was Moselle’s intention.

Throughout the early part of the film, Camille is offered a rolled up cigarette. It is like normal behaviour. After refusing several times, she gives in. However, there are some places Camille won’t go, namely at a party when guys are kissing girls, girls are kissing girls and a hand wanders towards Camille’s crotch. Time to go out on the roof!

Just how much skateboarding can a person watch?

As a teenager, I never got into skateboarding, but I did know who Leif Garrett (star of the 1978 film Skateboard) was. My brother once tried to make a skateboard from a roller skate and a piece of wood. I was real sad about that skate. In the decades since, skate parks have appeared all over London, taking over from adventure playgrounds. Mostly, I see skateboarders tricking on the South Bank under the Queen Elizabeth Hall. Moselle’s montages of skateboarding are never boring, mainly because we know that there is real danger involved – and no stunt doubles. When some of the girls hang on to the back of a garbage truck as it travels down the road, there is poetry – albeit garbage poetry. There is something visually pleasing about watching girls coasting down the middle of the street under their own power. These moments and an honest and humane coming-of-age story make Skate Kitchen worth experiencing. But if you think you will learn how to smoke a joint through a banana, though, some mysteries don’t deserve to be explained. 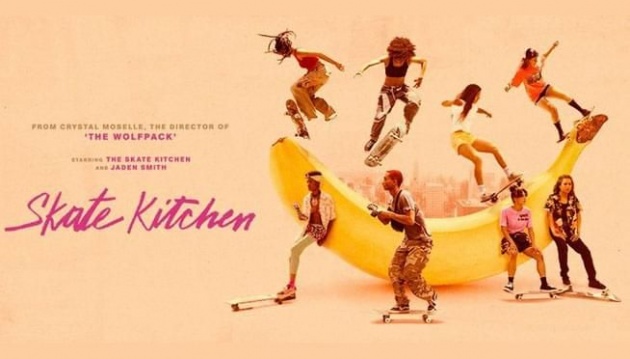 Reviewed at the House of Vans, Waterloo, London SE1, Thursday 13 September 2018, 19:00 screening, with an introduction by Ms Moselle and Ms Moran: ‘we hope you enjoy our movie. We worked real hard on it.’