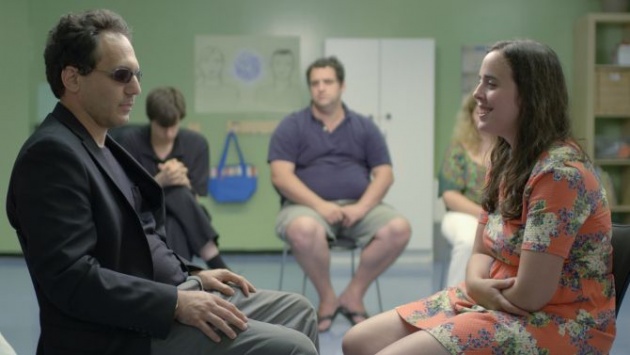 Does every woman who turns to film directing expect a career behind the camera? It is not a question that we would ask of a man. Yet I don’t see the female equivalent of Steven Soderbergh releasing two movies in a calendar year, helming an entire long form TV series and then returning to the big screen from which he had retired to knock out two movies (Logan Lucky and Unsane) in less than twelve months. Perhaps directing a film is a one-off endeavour: you do it and then, you know, have a life. But most of us love watching movies; we wouldn’t want to watch just one. So why would we want to make just one? Oh, yeah – the meetings; going round collecting production partners and pitching, like, a gazillion times.

So maybe Rachel Israel, the writer and director of the New York ‘autistic romance’ movie, Keep The Change will only make one movie in her life. Not because she lacks ideas or talent. However, they judge her on her one movie. It played at Tribeca and Stockholm, that’s nice. But how many times was it streamed?

Israel didn’t even think about casting Hollywood stars in autistic roles. She knew a guy on the autistic spectrum, Brandon Polansky, and wanted to make a film with him in the lead, based on his difficulties starting a relationship. After all, the only stories worth telling in cinema are those that haven’t been told before – which is why I am depressed that Greta Gerwig is following Lady Bird with another adaptation of Louisa May Alcott’s Little Women. (Why not pick a book that hasn’t been adapted?) Israel didn’t want to make a film about Polansky’s actual relationship, so she found a woman, Samantha Elisofon, also with an autistic disposition, to star opposite him.

They play David and Sarah. David has been mandated to attend a community group to better learn to converse in the real world after he insulted a policeman. If he had been from any other minority and used the world ‘pig’, you might expect force to be used. In any case David comes from a wealthy background; his cousin is a name actor. He got the community service.

What he really wants to do is meet women over the internet; they ought to call it a ‘computer-enabled relationship assessment’, maybe one day they will. Unfortunately, he comes across as a creep. His mouth gets him into trouble; we see one of the dates where the woman bails pretty early. As we discover, his parents would rather he dated a woman he met on the net than someone with his disposition because then they could pretend that he is a ‘normal’ person.

David has his own designated driver who works for his mother and father and even he won’t put up with his humour (‘why did the bum vote for Obama? He wanted change’). David doesn’t want to go to the centre, but the driver eases him in that direction. There he is amongst others who clamour to express themselves, including Sarah who likes to sing. The sessions are loud but David doesn’t want to take part; he wears sunglasses indoors to distance himself from the group. He is given an assignment – to go to a place with Sarah. He chooses the Brooklyn Bridge. Sarah is excited; she has never been there. When they leave the centre, Sarah has to beg David to take her.  So David hails a cab and they stand on the bridge, some distance apart. Then they part, but Sarah insists on being taken back to her bus stop; her grandmother’s is eight stops away. It’s what she knows. Reluctantly, David, who gives off a Jason Alexander ‘George Costanza’ vibe, takes her there. 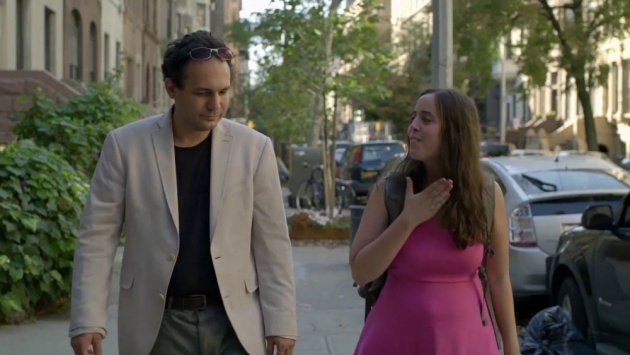 David meets Sarah’s grandmother, who offers him a drink from the bottle – that’s truly economical character establishment and then he and Sarah go to bed. Israel doesn’t show their intimacy. It is almost too much. Yet for autistic people watching the movie, they might learn something or reflect.

David takes Sarah to see his cousin’s play and he really wants him to meet her; he wants a normal life. Only he is cosseted by his parents’ wealth. He has made a autobiographical movie - mostly shots from him growing up intercut with disaster footage – which he imagines will get him into festivals and lead to something. One of the guys at the center tells it like it is.

There is an embarrassing restaurant scene where Sarah is instructed to order what she likes off the menu and orders dish after dish - $800 worth. David’s parents have to foot the bill. David doesn’t see this; he is too busy speaking to his cousin’s answer phone wondering where the heck he is.

Sarah gives a musical performance but David doesn’t appreciate it. He introduces her to his parents and takes her to the family’s holiday home. The meeting with David’s cousin doesn’t go well; the actor is hugely embarrassed, though has long learned how not to show it.

Does the relationship have a future? David finds himself getting on a bus for Sarah but then doesn’t have the change for the fare. The ending shows that while David can’t display love conventionally – especially to a woman who uses expressions like ‘yummy in my tummy’ – he can make a meaningful gesture, which Sarah responds to through her own behavioural mode.

Even if Israel doesn’t make a film about any other subject, can she offer us a sequel?