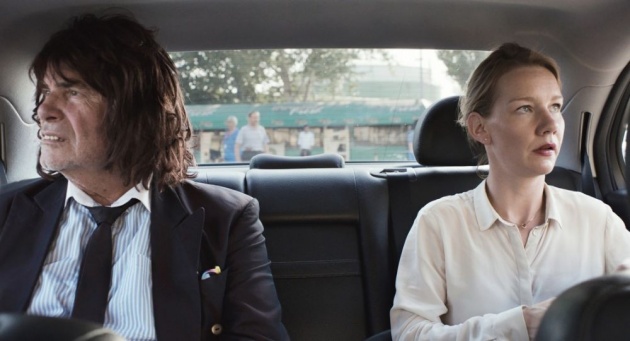 There are those who believe that the Palme D’Or at this year’s Cannes Film Festival should have been given to Toni Erdmann, a two hour and forty-two minute German comedy about an unusual father-daughter relationship.

As many critics will tell you, comedies don’t win major prizes as they are assumed to be frivolous – not art. There are two recent exceptions. La Vita È Bella (Life is Beautiful) (1997) winner of the 1998 Best Picture Oscar featured a father (Roberto Benigni) fighting to convince his young son (Gioergio Canterini) that they are not in a concentration camp and that the adults around them are playing an elaborate game. Michel Hazanvicius’ The Artist (2011) winner of the 2012 Best Picture Oscar was also a comedy about an over-confident silent movie star (Jean Dujardin) lost in the sound era. Let’s not also forget that Robert Altman’s M.A.S.H. won the Palme D’Or equivalent at Cannes in 1970. As these films prove, a comedy can say as much as a serious film.

This is certainly the case with Toni Erdmann, the third feature to be written and directed by Maren Ade – the others are The Forest for the Trees (Der Wald vor lauter Bäumen) (2003) and Everyone Else (Alle Anderen) (2009). She has also directed two shorts, Ebene 9 (2000) and Vegas (2001).

Ade’s films as a producer are more well-known than those as a director. She has produced Romanian director Radu Jude’s latest film, Scarred Hearts as well as Miguel Gomes’ epic Arabian Nights trilogy, set in modern Portugal, which wowed audiences at the 2015 Cannes Film Festival.

If an audience can commit to Gomes’ six hour and twenty-one minute trilogy, then surely a 162 minute film shouldn’t be too much of a problem. Ade tried to reduce the length but in her eyes when she did so it seemed longer.

Ostensibly, Toni Erdmann plays like a drama with comic interventions. It builds spectacularly to a birthday party team-building scene that takes the comedy of embarrassment to dizzying, hilarious heights. The final scene, in which the camera stays on one character whilst another goes to fetch something, is a brilliant if ambiguous way of expressing how far the two protagonists have gone to accepting each other. Yet why are they poles apart?

Ines Conradi (Sandra Hüller) is a successful (single) management consultant, who is currently working in Bucharest on a proposal for a Romanian oil company to out-source some of its drilling platform support work. The recommendations will lead to job losses in the parent company. As any business analyst will tell you, reducing the size of your directly employed work force shrinks your company’s pension liability. It is part of modern industrial practice to get workers off-book, shifting the liability to adhere to local labour laws to someone else. Analysts will also tell you that direct in-year costs increase as a result as the parent company compensates the contracting company for picking up the pension bill but over time decreases as the parent company limits its liability to fixed payments linked to results.

If this stuff was simple, management consultants wouldn’t be earning the big bucks.

It is for Ines and her company to prove that outsourcing can be cost-effective. She knows that by producing a set of recommendations that her company will be the scapegoat of the workers who lose their jobs. But that’s the way it goes.

Ines is a high-achieving woman working within a capitalist business model who knows what she is doing is morally wrong. But she does it because it is her job. It takes her to glamorous places – her ambition is to work in Shanghai. The negotiations in Bucharest are a means to an end.

Ines also aims to charm people. If to secure trust between her company and her client, she is required to take a businessman’s wife out shopping in (as she puts it) Europe’s biggest shopping mall where the locals can’t afford to shop, then she’ll do it.

Her father is Winfried Conradi (Peter Simonischek). When we first meet him, his face is caked in make-up, a mixture of black and white, as if he had attended Mexico’s Day of the Dead celebrations and then maintained his appearance for the flight home. He adopts a light, joshing tone. Visiting his ex-wife whilst wearing the aforementioned face paint, he puts his hands around her husband’s neck, affecting the pose of a zombie, for the perceived amusement of his daughter, watching him through a window. Ines has taken a brief trip back to Germany to visit her mother in advance of her birthday. Winfried didn’t bring her a present. So he takes it upon himself to visit her in Bucharest, wearing a goofy set of false teeth. He waits in her office lobby for three hours before she turns up with her clients, walking next to the group and then disappearing as they go through security gates as if double-daring Ines to acknowledge him. She remains fiercely professional.

Why the ghostly make-up? Winfried explains that he has taken a job at an old people’s home. If he reduces the number of residents, he gets a bonus. ‘Most of them want to go anyway,’ he explains. Those closest to Winfried know not to take him too seriously – in fact the make-up is for a performance at a school in which the children sing dressed as skeletons and the like in honour of their departing teacher – ‘here today, gone tomorrow’. The joke that retirement is a form of death resonates.

But if retirement is the problem, surely Winfried must not begrudge his daughter her career. Yet he does because in his eyes, she isn’t happy. At no point does Toni Erdmann turn into a sentimental Hollywood comedy in which Ines pleads to her father, ‘you’re right.’ As far as we are concerned, our sympathies are with her. 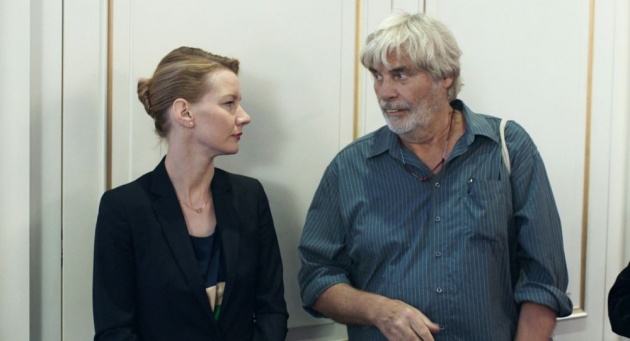 Winfried’s antics become more outlandish, explaining to Ines’ client that he rents a woman to be his daughter at home because his real one is never there. Inspired by his attendance at a reception for the American Embassy, in which Romania’s acceptance into the European Union is seen as a good thing (in terms of business opportunities), Winfried assumes an alter ego, German ambassador Toni Erdmann, who also doubles as a life coach.

The loopy humour in the film is difficult to categorize. At one point, at an egg painting party, Toni sits down at a keyboard and plays whilst Ines belts out a version of Whitney Houston’s power ballad ‘The Greatest Love of All’. Hüller is no Houston but she delivers the song with passion complete with wobbly notes. It is the perfect rendition of a perfectionist thrown a curveball with no preparation who powers through the task without embarrassment anyway. It is the film’s second best scene.

What’s the best? Not the scene in which Winfried uses the bathroom of a poor Romanian family or attempts to shake the hands of an oil worker caked in ‘black gold’, breaking protocol. It isn’t the scene where Ines and a colleague have a form of non-penetrative intercourse (a metaphor for her character – you can be familiar but you’re not getting in, and I’m in control). It is not the ingratiation that Ines’ PA adopts – she informs Winfried that Ines always gives her feedback on her performance. Or the way in which ‘Toni’ mixes with Ines’ English speaking friends, pouring them champagne whilst he has a beer. At one point, he ends up in a night club. Or a trip to a spa, in which Ines gets complimentary drinks after being misunderstood by a masseuse. Or when Winfried gives Ines a cheese grater as a present and later grates cheese on his head.

No. The film’s big set piece begins with Ines trying to zip up her dress with a fork and ends in a park. What happens in between? I’ll let you find out.

The film has serious things to say about how former Eastern bloc countries are being developed and the extent to which Germany as a leading industrial nation can make others adopts its practices. Mostly it is about a father and daughter estranged from one another. He is an embarrassment. But his dog has also died. He just wants to have a part to play in someone’s life and for someone to laugh at his goofiness. Does his wish come true? Please forget the length and see this enormously enjoyable film in which the running time flies by.