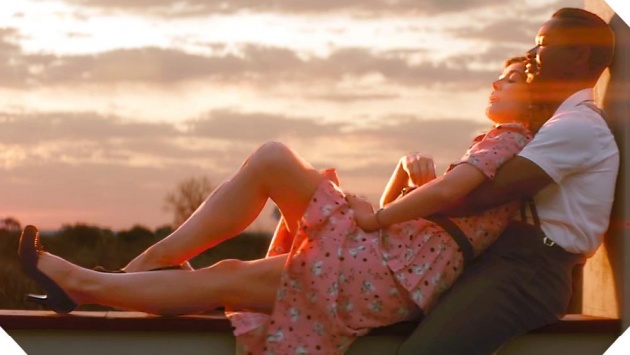 The final film in my review of fifty-two (well, sixty) films directed by women is ‘A United Kingdom’, director Amma Asante’s follow-up to her acclaimed ‘Belle’ (2014).  Asante, born in London in 1969 to Ghanaian parents, is a former child actress who became a writer (the UK TV series ‘Brothers & Sisters’, about a Baptist choir in Liverpool, first broadcast in 1998) and a film director in 2004 with ‘A Way of Life’. It took a further nine years before the release of ‘Belle’, illustrating the difficulty of getting a second feature off the ground.

Asante was primed to make her Hollywood debut in 2015 with the Warner Bros thriller ‘Unforgettable’ but left the project to make ‘A United Kingdom’. Whether she left ‘Unforgettable’ and then was approached by actor-producer David Oyelowo to direct ‘A United Kingdom’ isn’t clear. It is usual in the film business to develop several projects simultaneously and then to prioritise the one most likely to be green-lit for production.

At any rate, ‘A United Kingdom’ establishes Asante as the go-to director for mixed race romances in period settings, at least as far as funding is concerned - ‘Belle’ turned a small profit, and that’s what counts. Interesting subject matter doesn’t always make for inspiring movies and so it proves with this. The epic nature of the story – it spans a couple of decades – all but defeats Asante and the screenwriter Guy Hibbert (‘Eye in the Sky’) though in my mind it fails because of the absence of a principal viewpoint character.

In general romances are skewed towards one or other of the parties. A beautiful, headstrong young woman (our heroine) meets a handsome, charismatic man and joins him in bondage – that’s the plot of ‘Fifty Shades of Grey’, but you knew that already. One or other of the parties is objectified across a crowded room, then there’s the pursuit and the complications, a misunderstanding, a coming to one’s senses and the ‘happy’ ending, possibly involving leather goods.

In ‘A United Kingdom’, Asante cuts between feisty young bank clerk, Ruth Williams (Rosamund Pike) and English educated Seretse Khama (Oyelowo), Prince of Bechuanaland, in London in 1947. They meet at a party for missionaries, see each other again and then Ruth accepts Seretse’s proposal of marriage. However, Seretse is forbidden from taking Ruth back to Bechuanaland. The government of its neighbour, South Africa had just adopted the policy of apartheid (in 1948), segregating blacks from whites. A country ruled by the happy union of a black king and a white queen would upset their powerful industrious neighbour, resulting in unspecified action to be taken against British interests.

To understand what was at stake at that time, regardless of one thinks of the morality of it – and apartheid is morally reprehensible on every level – one has to look at the relationship between Great Britain and South Africa at the time. Britain did not expect Dr Daniel F. Malan’s National Party to win the election of 26 May 1948 against the Unionist Party led by ‘war hero’ Field Marshal Jan Smuts. South Africa had provided Britain with a gold loan, so the two countries were bound economically. Britain did not expect the rule of Malan’s National Party to last – certainly not until 9 May 1994. In 1949, South Africa passed the ‘Prohibition of Mixed Marriages Act’ meaning that Ruth and Seretse’s union would not to be tolerated if (for any reason) they wanted to visit.

Ruth and Seretse’s story is told in broad strokes. Early on, whilst in the midst of a university boxing bout, Seretse is distracted in the ring by a racial epithet and is floored by a punch. The English, we learn from this scene, fight dirty – and boy, do they ever. What keeps Ruth and Seretse is the faith in their relationship and a means by which Seretse could prove Bechuanaland’s worth to the British, who acted as protectorate for that country.

As well as standing up to the British, Seretse has to prove the suitability of his bride to his uncle, Tshekedi (Vusi Kunene, star of the Soweto TV hit, ‘Generations’). A public meeting – a kgotla - takes place and Seretse rouses the crowd to his side.

Complications ensue: the British want to encourage the couple to go back to England for a private meeting. Seretse goes, Ruth stays. Then Seretse is told his suitability to rule has been the subject of a report led by Justice Harragin. A Government Official (Jack Davenport) tells Seretse has been judged unfit to lead his country. Ruth discovers she is pregnant.

I don’t want to give away the ending – how the couple is reunited and gets round the suppression of the Harragin Report – Labour MP Tony Benn (Jack Howden), complete with pipe, makes an appearance. Suffice to say, the ending isn’t achieved through a persuasive act by either Seretse or Ruth, unless you count Seretse’s understanding of mining interests.

This is a very un-Hollywood biopic that lacks the big gestures and real catharsis of the best historical romances. It does have some nice moments, notably after Ruth is invited to a dance by Seretse. ‘Can you get two tickets?’ pleads Ruth’s sister, Muriel (Laura Carmichael). ‘No, I will not,’ snaps Ruth, anxious to deepen her acquaintanceship with the jazz loving Seretse. (He sends her a record as a gift.)

Jack Davenport’s character, Alistair Canning, isn’t a real person, but some of his scenes are filmed in the UK Foreign and Commonwealth Office (with its colonialist paintings on the wall); the location has more veracity than the character.

Having played Martin Luther King, Oyelowo can handle the great, passionate speech. Disappointingly, his character is all declamation and no internal depth. Seretse is defined only by his love for Ruth and a general ambition for his country. We get only a little sense of how he turned the newly independent Botswana into the world’s fastest growing economy between 1966 and 1980. The only indication in the film is when he spots a mining truck and realises something is afoot. Of course, no one wants to watch a film where the main characters debate economics in post colonial Africa – except maybe they ought to.

‘A United Kingdom’ is a middle-ground, middle-order middling film that even makes Rosamund Pike look ordinary. Pike occasionally affects a London accent but then drops into Home Counties, as if somehow she would feel that London would never do. There is an amusing moment when Ruth practices a queenly wave, but just as her struggle to adapt to a new way of life in Bechuanaland becomes interesting, Asante moves back to Seretse’s story.

Asante has complained that Hollywood doesn’t trust women to helm really big films. She has a point but doesn’t make a film that suggests that Hollywood is missing out. Asante’s films pay attention to politics but are otherwise exposition heavy and formally unremarkable. Hibbert, adapting Susan Williams’ book ‘Colour Bar’, is a good screenwriter, but his writing is fairly functional here. That said, Asante gives the audience enough to sense that her true breakthrough film is ahead of her. I shall look forward to it.