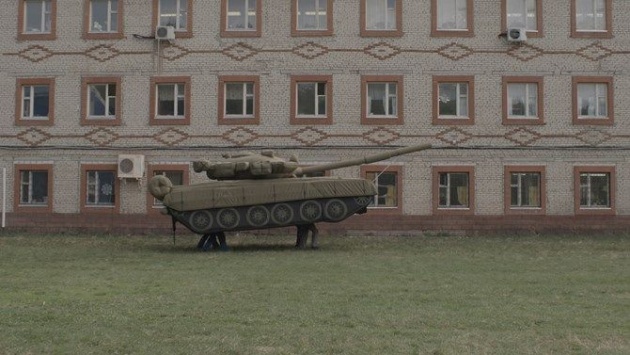 I don’t know if Battles, a feature length documentary by the Belgian director Isabelle Tollenaere, qualifies as a movie. It is three parts a meditation of what war has left behind and one part about how war is celebrated now. The final quarter in which we see balloon aircraft and tanks being sewn together and inflated in time for Russia’s Victory Day parade is by far the most successful. It is amusing, visually arresting and has depth and substance. The other three parts are essentially a write-off – and a long slog to sit through. Moreover, they don’t work well with one another and, individually are incoherent. The writer-director Paul Schrader once said that audiences would rather be confused than bored. Well, reader, I was both confused and bored.

The first section deals with the Belgian detection and decommissioning of crusted tank ordinance – the unexploded shells found embedded in the soil. The first image, of earth being turned over by a specialist machine is arresting, but the second image of the machine, which resembles a combine harvester, crossing the screen in the dark, then moving back into frame and stopping dead centre suggests a scene staged for the camera. Immediately, we are not in the realm of documentary, rather a fake equivalent. I overrode my scepticism to follow the next scene, which showed the recovered bullet-like missile rattling on the floor of the vehicle as it headed back to base. The scenes with the shell are tense as we (naturally) wonder if they might explode if mishandled. But Tollenaere is interested in their aesthetic quality – standing on one end, they look like teeth. I gradually came to the conclusion that we weren’t going to learn how these missiles are rendered safe. There is no voiceover, nothing to explain what is going on. We are intentionally distanced from what is initially tense activity. I felt my interest drain away.

In the second section, the action moves from Belgium to Latvia, as we see a group of former soldiers put members of the public through their paces in a form of military training. This is known as dark tourism – people pay to experience an activity that can (under wartime circumstances) result in death. The tourists go through boot camp and all its punishments for fun. The camera stays with the female drill sergeant, a compelling authoritarian figure, and a male colleague. Even so, watching it, I didn’t really understand that the conscripts were tourists. We never hear from them. The scenes are strikingly unrevealing and, again, the detachment leads to a growing feeling of restlessness. At one point the drill sergeant and her colleague go for a night time drive. They look out at the forest. ‘I wish I had my camera,’ she remarks. I wished she had borrowed Tollenaere’s film camera – she might have made better use of it.

In the third section, we find ourselves in Albania. A family use a disused bunker as a stable for their horses. In one distinctly pointless scene, a young boy watches a pop video on TV whilst an older relative sleeps. Great composition, but what does this have to do with living with the fallout of war? Tollenaere films discussions at the dining table. This family isn’t rich. They are making do. We don’t know how they survive. Frustratingly, as with the first two sections, nothing is developed. It is like a caricature stretched to tedious breaking point. Finally, we find ourselves in Russia.

The last section is stylistically similar to the first three – activities recorded impassively, without comment – but there is more going on. For starters, the life-size balloons are arresting in themselves. We also see the women who sew them together deal with the media: ‘what is the hardest thing about making these balloons?’ ‘Oh, there is no problem,’ says the old woman. It is as if criticism isn’t permitted. For the first time in the film, we see people playing a role and hiding their true feelings. The balloons themselves had a use in the Soviet era, to distract the enemy and simulate troop movement. They are also symbols of strength and patriotism. They are archaic and absurd – how could they fool anyone? Yet they are also weirdly splendid.

The final quarter is the reason to see the film, but for a good hour I felt restless. Why was the director intent on creating unpleasure. Frustrating moviegoers’ pleasure is a legitimate directorial technique but I felt here that Tollenaere was not in control of her material. A director either directs me to feel something – laugh, cry, be shocked – or think something – make connections between images and introduce unexpected parallels. All I felt watching the first hour of Battles was a mounting sense of frustration – why am I still here? Why am I still watching this? It was all I could do to stop myself walking out. I explained my feelings to the director in the post screening Q and A – I could hear my mother telling me, ‘if you don’t have anything nice to say, don’t say anything at all.’ Tollenaere apologised for me not enjoying the film. Another audience member defended the film because he was curious. I was curious too, but the film neither built to any conclusion nor sated my curiosity. It was one of the most frustrating ninety minutes I have ever spent in a cinema – Tollenaere had turned us all into dark tourists.