8 Times When WWE Universe Was The Star Of WWE Matches

Sometimes World Wrestling Entertainment (WWE)`s wrestlers are not the real stars of a match. Actually, people sitting in the crowd aka WWE Universe steal the show by delivering a huge pop or by giving a loud boo to a particular wrestler. For a professional wrestling promotion crowd reactions are really important to make any match relevant to the entire world. People who are watching wrestling on their TV sets are more likely to connect with the crowd sitting in the arena. Remember SummerSlam match between Bret Hart and Mr Perfect? well, that match became so remarkable and rememberable because of that evening`s crowd reaction. Same goes for a bunch of wrestling matches in late 1990`s.

Another such crowd reaction came during a match between Randy Savage and Ricky Steamboat at WrestleMania III. But there are plenty more matches which need to be mentioned in this blog. With that saying, I am hereby you all present "8 Times When WWE Universe Was The Star Of WWE Matches".

In 2013, the night after WrestleMania, Sheamus faced Randy Orton in order to find who will face Big Show for an upcoming match. But unfortunately, WWE Universe during that night was not at all interested in the match. People were cheering loud for RVD, Cm Punk, ECW. But, things went funny when the crowd started chanting the names of ring announcer Justin Roberts and later chanted for commentary team members. JBL, Michael Cole and Jerry Lawler who were on the commentary table during that time, go with the flow of the WWE Universe`s chants. Each individual, especially JBL started to laugh along with crowd`s reaction.

Royal Rumble 2014, is remembered as having the most savage crowd chants of modern day wrestling. The crowd booed out Batista from the building after he won Royal Rumble later that night. But it was nothing compared to the hate that was taken by John Cena and Randy Orton. They both were competing in a World Heavyweight Championship match. But, the crowd decided to ruin that match by chanting names. First, they were chanting Daniel Bryan, then switched on to Randy Savage. Later they simply started to boo both the competitors throughout the match.

ECW chants are most commonly used by the WWE fans during a match or on promos. Long ago in 1995, same chants were used by WWE Universe when ECW was making a name for themselves in the wrestling community. At KOTR 1995, fans were not so much pleased by the bookings of the whole paper view. They turned the building loud by chanting ECW which was clearly heard behind the commentary team. The crowd was never interested in the final match between Mabel vs Savio Vega from the very beginning. 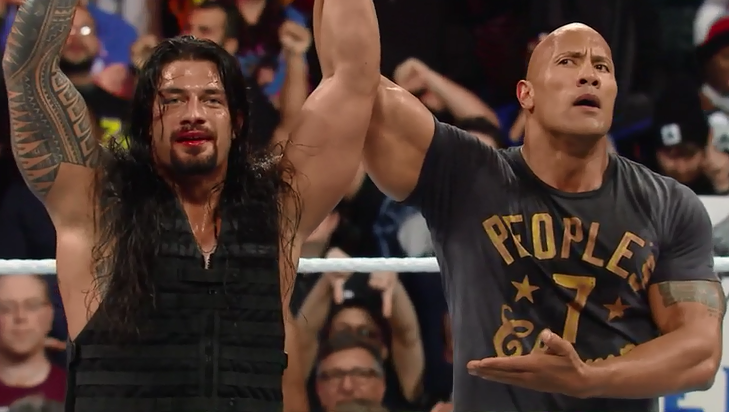 The year 2015 is said to be as the year of Daniel Bryan in professional wrestling. Daniel, who wasn`t a World Championship quality material in WWE`s eyes was getting a great audience`s support during this time. But, as we all know WWE bookers never liked him and instead of his popularity, they booked Roman Reigns as the winner of Royal Rumble match. And after the elimination of Daniel from the match, WWE Universe lashed out by chanting loud Daniel Bryan`s name. During the dying moments of the match, we witnessed Big Show and Kane giving a beating to Roman Reigns. The Rock who is real life cousin of Roman came to the ring to help him. But, even the world`s highest paid actor The Rock wasn`t able to hold the receiving boos coming from the crowd. Just look at his
facial expression. LOL!

5. Hart Foundation vs Team WWF (In Your House: Canadian Stampede)

Same like above situation, RVD was getting a home support from ECW fans. Just imagine if WWE rings were taken over by ECW chants all these years, then what could be the situation in an ECW ring itself. RVD who was Money in the Bank briefcase holder during that time challenged John Cena for WWE Championship at ECW: One Night Stand. Everyone knew that ECW fans would bury John Cena on this paper view. When John Cena arrived at their house they indeed did bury him. ECW fans went so far that they assaulted Cena verbally by chanting "Die Cena Die".

I guess John Cena is one unlucky dude facing the same situation again and again. This time he faced rage from WWE Universe from a home support to Cm Punk from Chicago fans. This paper view single-handedly changed the entire landscape of the WWE. Before this paper view, Cm Punk who was a heel character during this time, pipe-bombed on WWE in a segment. His words were supported by WWE Universe as he was telling harsh & truth words in his sentences. He was basically speaking on behalf of WWE Universe. When MITB 2011 arrived, Chicago fans supported Cm Punk by chanting "CM PUNK" whole night. This cemented his babyface character after a huge support.

If you are into wrestling then you may know WWE fans just don`t like Roman Reigns. A big majority of fans hates him for getting title opportunities again and again. At WrestleMania 32 he was again main eventing the paper view and was again getting WWE Championship title opportunity against Triple H. It was kind of strange to me as Roman was playing a babyface character and Triple H was a heel during this time. But, the fans actually cheered Triple H and booed Roman Reigns throughout this feud. The boos were so loud that WWE creative team backstage would have to initially low down arena`s voice. LOL.


Written for Bitlanders by YourReviewKid. All rights reserved
©Your Review Kid