First of all, I apologize for not updating...at all, really over the past three weeks. I was making plans to move to a new place of residence but those plans basically blew up in my face. So after seeing all of that come to nothing, I was feeling a bit dejected for a little while, but then I realized I should be feeling relieved. The pressure's not exactly off for me to move out but it's not so on either that I have no time to think about or do anything else. So I've gone back to some things I've seriously been neglecting, like animating and writing.

But in the meantime, I've also been doing a serious amount of gaming.

Yes, in between moments of making moving plans and worrying about whether they would work out or not (and we're definitely in the "not" area of that region), I took the time to play some games I downloaded from Steam and Origin. One of course was the Sims 4, which I was really looking forward to playing for a long time. I've devoted approximately, 27 hours to the game since it's release and I have enjoyed the heck out of it. Playing as my characters from Emina and trying to base the game's mechanics over their likes and dislikes has been an absolute blast to play. And I haven't even gotten through the whole crew yet! Surprisingly enough, there are some characters that I enjoy playing more than others. Even more surprising, they're not my lead characters. I'll go more into detail about that at some other time, but needless to say my preference for who I wanted to play as I got deeper into the game most definitely took me by surprise.

I guess it helped that I had stopped playing The Sims 3 about 4 months before the release of The Sims 4 because I wasn't so shocked by the missing features or the new style of format implemented into the towns that your Sims inhabit. Looking back, I can see that there are definitely some things missing and the new ways of control and navigation do take some getting used to. But over all I'm enjoying my time with the game a great deal. I doubt I'd sink 27 hours into something that I found to be terrible. But to be honest I am definitely looking forward to whatever expansions EA has in mind for the game. It can only help to make the game feel more well rounded at this point.

Something else that was surprising were the games I downloaded from Steam which fought to take up my free time in place of playing the Sims 4. They're similar in play style but very different in terms of genre. One of them is a point and click adventure game called Deponia and the other a visual novel game with RPG elements to it called Sunrider: First Arrival. Sunrider was free to play while Deponia was on sale for about $3 so I decided to pick it up. 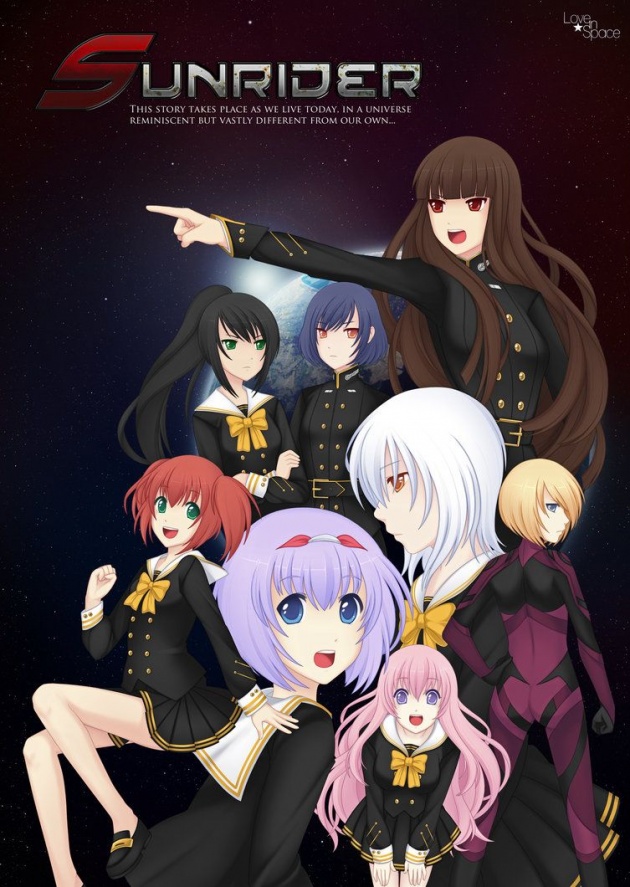 Starting with Sunrider, I have absolutely no idea what to expect from this game. I've never played a visual novel before, and after seeing the Game Grumps slog through something like Sakura Spirit, I didn't have very high expectations going in. But being a fan of science fiction and space operas (hehehehe) I was quickly taken in by the game's setting and anime art style. Quickly enough I got used to the game's style of control (when you could control things), resembling something like a turn based strategy that had RPG elements to play around with in between battles. I can't say that I'm a huge fan of the story or characters because they give off a "been there, done that" kind of thing in how they're presented and what they say. The game comes across as a harem anime considering that there's only one male protagonist and the majority of the other characters whom you interact with are female.

Basically, I'm saying if you've seen something like Tenchi Muyo/Tenchi In Space you can already guess what the personalities of the female characters are going to be like. That being said, I did enjoy Sunrider and I plan to pick up its upcoming sequel which is suppose to be releasing in October.

Check out some of the awesome music from Sunrider's battle events. They will get you pumped for galactic warfare!

Now Deponia was something else entirely. 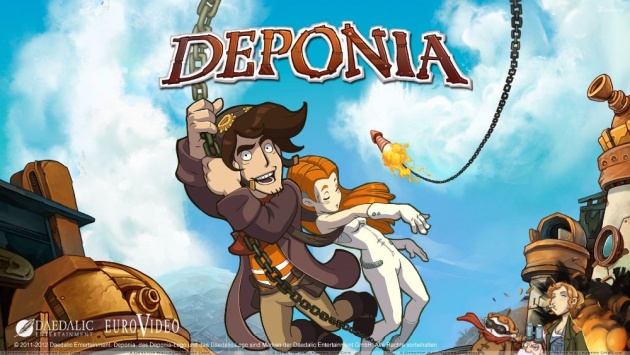 As I mentioned before it's a point and click adventure game where you have to advance the plot by gathering certain items and speaking with other characters. The last time I played a game like this was Full Throttle in 1995, and that game was incredibly intimidating for someone like me (who was about 9 years old at the time) to play. But since it's 19 years later and I've had a considerable amount of other gaming experiences behind me, I felt ready to take on something like Deponia. It took a little time but I was soon hooked into the game's sci-fi, kinda steam punk setting. Well, I guess it's not really steam punk since the characters live on a trash heap of a world, rather than a world powered by steam. It'd probably be more accurate to say it's sci-fi grunge. Most of the characters you come across have nothing but contempt for the main character you control, who fancies himself a genius and a hero but is basically a thief and a narcissist (basically a giant douche), and this impedes your progression through the game. But the story is so well told, the characters are so well realized, and the art is amazingly well done that all you want to do is hurry up and see what happens next. Of course, you still have to figure things out and do things in a certain order so that you can progress, but when you do the plot really hooks you in and you want to see these characters interact more.

The dialog is biting, funny, incredibly well acted, and the plot (which turns from a simple attempt of trying to escape a humdrum existence to outwitting imperious forces) takes you on an incredible journey. And to think that there's two more of these games out there for me to experience! Deponia went from being an oddity on my Steam wishlist to jumping straight to my next pick to play after Civilization Beyond Earth. And who knows, I might even jump into the next adventure before that, because I hear the Civilization games can completely take over your life.

Here's a link to Deponia's awesome soundtrack. You'll get through it in about 25 minutes but it's a great listen none the less!

So in short, that's what I've been doing. It's been such a long time since I've had some new gaming experiences because of what my financial situation was, but as things are changing I hope to be able indulge my interest in gaming a whole lot more. Of course, I'll still be working to bring you guys new animations from my shows. I'll just have to find a way to make time for both gaming and animating in between all the other stuff I have to do offline.