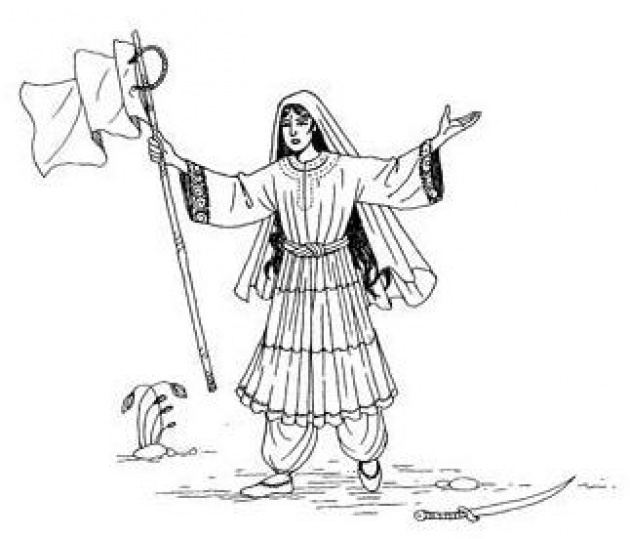 While in Britain, no one has heard of her, in Afghanstan Malalai (or Malala) is a legend. Smaller facts in the story vary slightly, but although it is Ayub Khan who became known as the Victor of Maiwand, it is said that it was Malalai who actually saved the day.

She was a native of Khig, a tiny village on the edge of the Maiwand battlefield, and the daughter of a shepard. Both her father and fiancée joined with Ayub's army in the attack on the British on July 27th 1880 (which some say was also her wedding day), and like many women, Malalai was there to help tend to the wounded and provide water and spare weapons. Eventually there came a point in the battle where the Afghan army, despite their superior numbers, started to lose morale and the tide seemed to be turning in favour of the British. Seeing this, Malalai took off her veil and shouted out:

This gave many of the Afghan fighters and ghazis a new resolve and they redoubled their efforts. At that moment one of the leading flag-bearers fell from a British bullet, and Malalai went forward and held up the flag (some versions say she made a flag out of her veil), singing a landai:

But then Malalai was herself struck down and killed. However, her words had spurred on her countrymen and soon the British lines gave way, broke and turned, leading to a disastrous retreat back to Kandahar and the biggest defeat for the Anglo-Indian army in the Second Afghan War. Ayub Khan afterwards gave a special honour to Malalai and she was buried at her village, where her grave can still be found.

British sources, unsurprisingly, do not mention Malalai. Her actions may not have been noticed by any of the British, or they may not have seemed as consequential as they were to the Afghans. Afghan women are very rarely mentioned at all in the reports and narratives of the war (Hensman mentions that one woman was found among the dead at Ahmed Khel). Interestingly, it is the Afghans who provide some of the evidence for one of the other legends born at the battle of Maiwand, as it is from one of Ayub's artillery colonels that we learn some of the details of the famous last stand of the 66th, clutching to their company colours, in a Khig garden, where indeed the fallen bodies were later found to be lying.

As well as Malalai, there were many other factors in the Afgan's favour on that day, including preferential terrain and positioning, superior numbers, skilled use of outnumbering artillery, and perhaps some bad decisions on the British side of things. But certainly her actions were enough to turn her into a national hero where she is still revered today. Schools, hospitals and even a women's magazine have been named after her. It is also a popular girl's name, with Malalai Joya a rare female voice in post-Taliban Afghan politics.

By: A F Salehi

A F Salehi graduated from Political Science department of International Relation Kateb University Kabul Afghanistan and has about more than 8 years of experience working in UN projects and Other International Organization Currently He is preparing for Master degree in one Swedish University.