Cappadocia is a historical region in Central Anatolia, largely in the Nevsehir, Kayseri, Aksaray, and Nigde Provinces in Turkey. Cappadocia lies in central Anatolia, in the heartland of what is now Turkey. The relief consists of a high plateau over 1000 m in altitude that is pierced by volcanic peaks, with Mount Erciyes (ancient Argaeus) near Kayseri (ancient Caesarea) being the tallest at 3916 m. The boundaries of historical Cappadocia are vague, particularly towards the west. To the south, the Taurus Mountains form the boundary with Cilicia and separate Cappadocia from the Mediterranean Sea. To the west, Cappadocia is bounded by the historical regions of Lycaonia to the southwest, and Galatia to the northwest. The Black Sea coastal ranges separate Cappadocia from Pontus and the Black Sea, while to the east Cappadocia is bounded by the upper Euphrates, before that river bends to the southeast to flow into Mesopotamia, and the Armenian Highland. This results in an area approximately 400 km (250 mi) east–west and 250 km (160 mi) north–south. Due to its inland location and high altitude, Cappadocia has a markedly continental climate, with hot dry summers and cold snowy winters. Rainfall is sparse and the region is largely semi-arid. 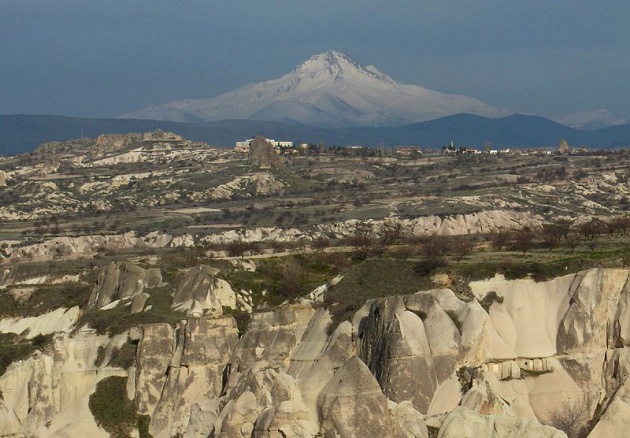 Mount Erciyes derived from the ancient Greek name Ἀργαῖος Argaeos; Latinized as Argaeus by the ancient Romans) is a massive stratovolcano located 25 km (16 mi) to the south of Kayseri in Turkey.

Erciyes is the highest mountain in central Anatolia, located within the ancient region of Cappadocia, with its summit reaching 3,916 m (12,848 ft). It is considered to be the highest peak of the Anti-Taurus mountain range, a northeastern extension of the Taurus Mountains to the south, and belongs to the Alpide belt in Eurasia.

The volcano is heavily eroded, but may have erupted as recently as 253 BC, as may be depicted on Roman era coins.

The volcano is heavily eroded, but may have erupted as recently as 253 BC, as may be depicted on Roman era coins.

Strabo called the mountain Argaeus (Ἀργαῖος); he wrote that the summit was never free from snow and that those few who ascended it reported seeing both the Black Sea to the north and the Mediterranean Sea to the south in days with a clear sky.

The first documented successful climb was performed by William John Hamilton in 1837. There are, however, some historic writings and symbols on the rocks at the summit, indicating earlier human presence there. There are two caves near the summit tower, of which at least one must have been expanded by humans. It is supposed that monks in historic times have visited the summit several times.

There are winter sports facilities on the mountain, usually accessed from nearby Kayseri. 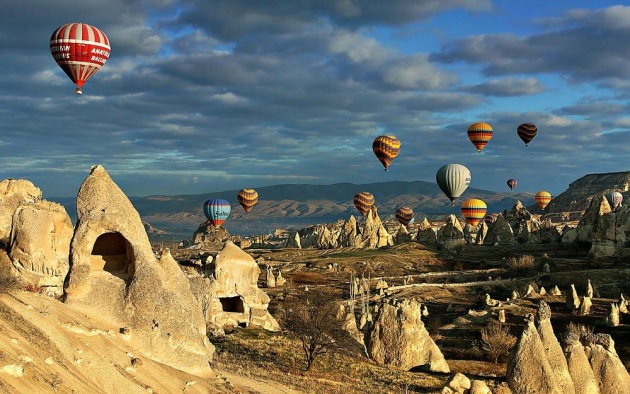 The area is a popular tourist destination, as it has many areas with unique geological, historic, and cultural features.

The region is located southwest of the major city Kayseri, which has airline and railway service to Ankara and Istanbul and other cities.

The most important towns and destinations in Cappadocia are Ürgüp, Goreme, Ihlara Valley, Selime, Guzelyurt, Uchisar, Avanos and Zelve. Among the underground cities worth seeing are Derinkuyu, Kaymakli, Gaziemir and Ozkanak. The best historic mansions and cave houses for tourist stays are in Urgup, Goreme, Guzelyurt and Uchisar.

Hot-air ballooning is very popular in Cappadocia and is available in Goreme. Trekking is enjoyed in Ihlara Valley, Monastery Valley (Guzelyurt), Urgup and Goreme.

Sedimentary rocks formed in lakes and streams and ignimbrite deposits that erupted from ancient volcanoes approximately 9 to 3 million years ago, during the late Miocene to Pliocene epochs, underlie the Cappadocia region. The rocks of Cappadocia near Göreme eroded into hundreds of spectacular pillars and minaret-like forms. People of the villages at the heart of the Cappadocia Region carved out houses, churches and monasteries from the soft rocks of volcanic deposits. Göreme became a monastic centre in 300–1200 AD.

The first period of settlement in Göreme goes back to the Roman period. The Yusuf Koç, Ortahane, Durmus Kadir and Bezirhane churches in Göreme, and houses and churches carved into rocks in the Uzundere, Bağıldere and Zemi Valleys all illustrate history and can be seen today. The Göreme Open Air Museum is the most visited site of the monastic communities in Cappadocia (see Churches of Göreme, Turkey) and is one of the most famous sites in central Turkey. The complex contains more than 30 carved-from-rock churches and chapels, some having superb frescoes inside, dating from the 9th century to the 11th century.

A rock-cut temple in Cappadocia 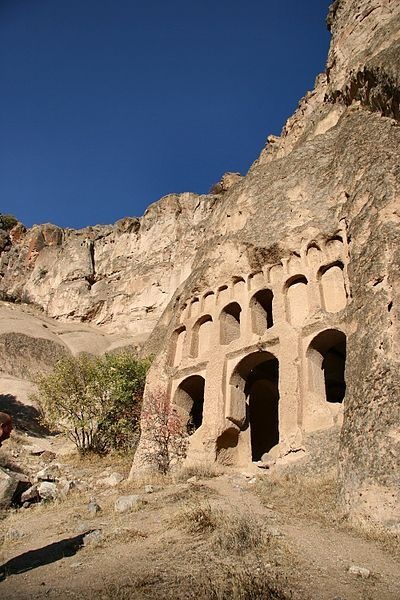 The town Göreme with rock houses in front of the spectacularly coloured valleys nearby. 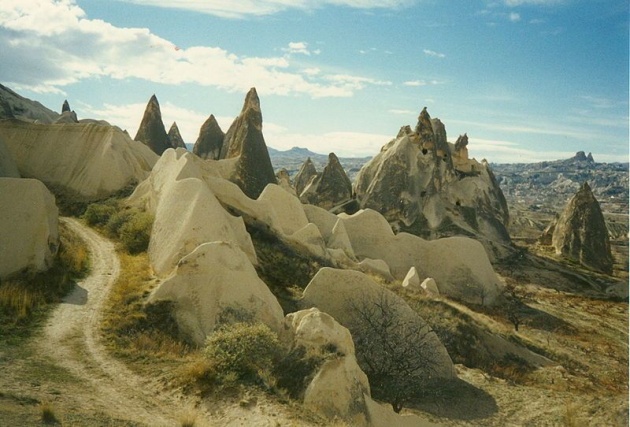 Göreme located among the "fairy chimney" rock formations, is a town in Cappadocia, a historical region of Turkey. It is in the Nevşehir Province in Central Anatolia and has a population of around 2,500 people.

Former names of the town have been Korama, Matiana, Maccan or Machan, and Avcilar. When Göreme Valley nearby was designated an important tourist destination, a "center" for all tourism in Cappadocia, the name of the town was changed to Göreme for practical reasons.

The Göreme National Park (Göreme Milli Parklar in Turkish) was added to the UNESCO World Heritage List in 1985.

The location of Göreme was first settled back in the Roman period. Christianity was then the prevailing religion in the region, which is evident from many rock churches that can still be seen today.

Among Göreme's historically important sites are Ortahane, Durmus Kadir, Yusuf Koc and Bezirhane churches, in addition to the richly decorated Tokali Kilise, the Apple Church, and a number of homes and pigeon houses carved straight into the rock formations in the town.

Image credits: Jean Beltran via bitLanders Airy with a very well designed interior this was what I k…

Reasons Why Calle Crisologo is a Must Visit Place When You Are In Vigan City.