I am a bit of a sci-fi nerd when it comes to the kind of media I consume. Also, I'm a big fan of Natalie Portman and her performances, so I was really revved that I got to see "Annihilation" and pretty excited to review it for you all!

From what I was told about this movie, it's terrifying. Or at least the "monster" in it is...also it's a bit of a psychological mindmesser so I was curious... 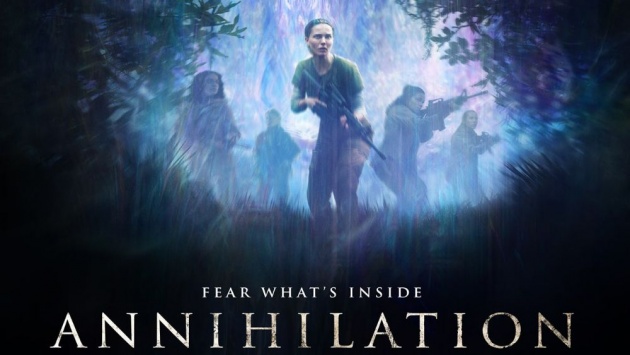 Directed by Alex Garland and starring Natalie Portman, Jennifer Jason Leigh and Gina Rodriguez, "Annihilation" takes place at a military base known as "Area X" on the southern coast.

The movie opens with U.S Army Soldier Lena [Natalie Portman] being interrogated and debriefed regarding "the shimmer" a magnetic phenomenon that herself and a group of other scientists entered. It is revealed herself and her husband are the only survivors of "the shimmer" ever.

The movie then moves on to a time obviously earlier on in this timeline of Lena alone at home. Her husband has been on a mission and she presumes he is dead because it has been a year since she has heard anything from him. He shows up one day at their home with no memory of where he has been for the last year. Additionally, he seems unwell and soon government forces intervene and apprehend the couple, taking them to "Area X". 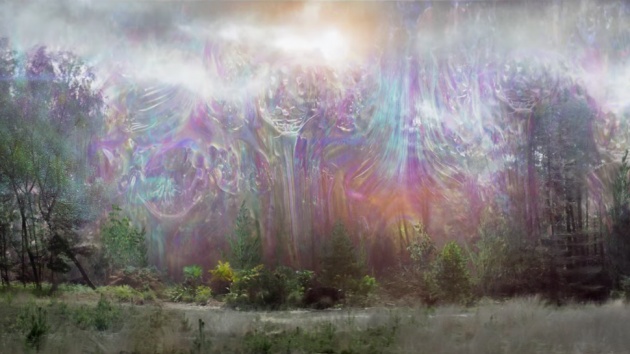 Here, Lena learns about "the shimmer" and how it has grown over the last 3 years since it's appearance.

She learns, from Dr, Ventress [Jennifer Jason leigh],  that her husband is the only one to ever return from the shimmer, and that she and a group of scientists are planning their own expedition into "the shimmer" and the lighthouse at it's center where the anomaly first started. Lena is recruited on this mission as her husband seems to be dying in critical care and she wants to understand what happened.

The other researchers on this mission with Lena and Dr.Ventress include Josie a physicist, Cass, a geomorphologist, and Anya a paramedic. 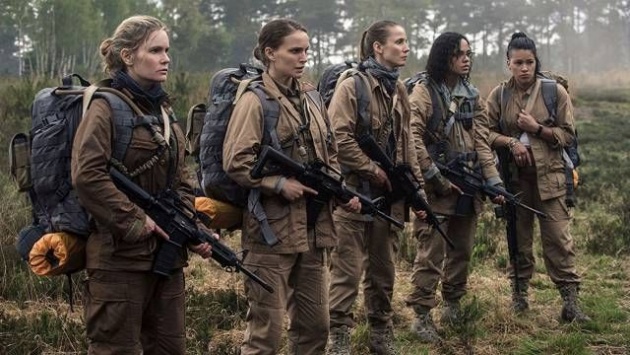 The group head out into "the shimmer" shortly thereafter and quickly find their guidance systems no longer work. They also quickly begin to lose track of time generally. The landscape boasts strange plants and Josie is attacked by a strange alligator that seems to be hybridized with a shark.

The group come to understand that "the shimmer" causes mutation on the cellular level, and when they come across an abandoned military base, they find a video from the last expedition team. 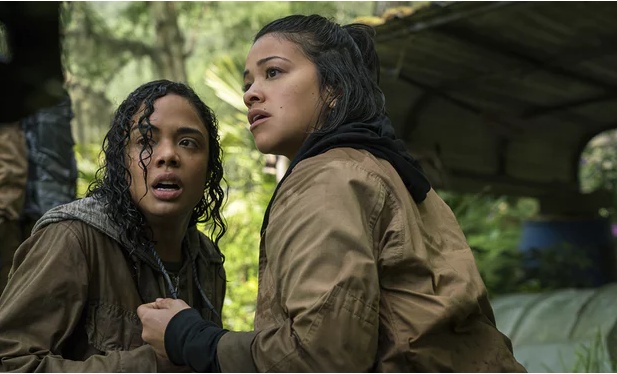 The video features Kane, Lenas husband, cutting open the stomach of a teammate and revealing what seems like a moving snake inside of him instead of intestines. The group then find the body of said teammate, but far more mutated at this point.

That night a mutated bear attacks the camp, breaking through the security fence and snatching Cass. The next morning Lena finds her corpse and confirms her death to the rest of the team. 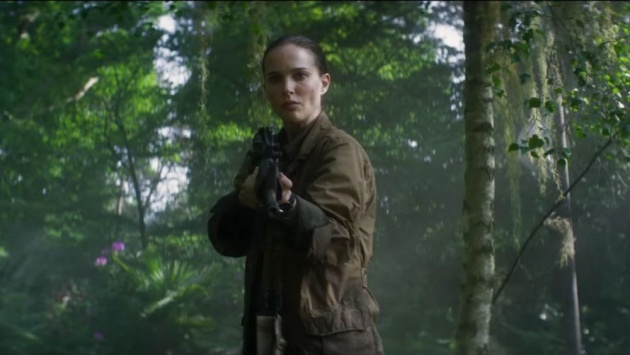 The group continue towards the lighthouse and on the way come across humaoid plants. They theorize that "the shimmer" is acting like a prism and distorting and refracting their genes. The group soon realize they, too are changing and mutating.

Anya later becomes paranoid about their worsening situation. She learns Kane is Lena's husband [a fact Lena has kept to herself the entire time] and ties up the teammates, accusing them of killing Cass.

She then hears screaming outside that sounds like Cass and goes to check it out. It is revealed the screaming is actually the mutated bear that killed Cass. It is mimicking the screams she made before she died. The bear enters the house and kills Anya. It then attacks Lena before Josie shoots and kills it. 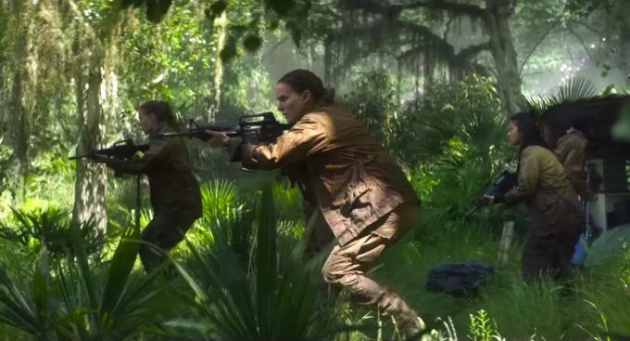 At this point the team is small, and they consider turning back. Dr.Ventress makes it clear she intends to push on even if they don't wish to come as well. Lena decides to continue. Josie stays and becomes a humanoid plant.

Lena finally reaches the lighthouse and finds the outside of it littered with arranged skeletons. She goes inside to find a hole in the floor, a video camera..and an incinerated corpse. The video reveals that the corpse is Kane, who is ranting to someone offscreen about how "the shimmer" has changed him and to "find Lena" before he commits suicide with a grenade. Afterwards a doppleganger of Kane appears on the screen. 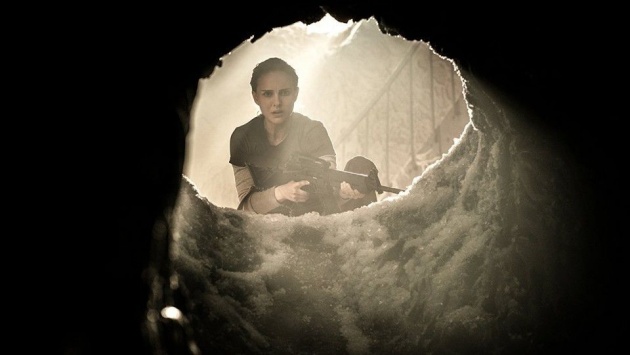 As she tries to outsmart it, the humanoid mirror becomes more like Lena until it is an exact copy. Lena then uses the mimickery behavior to set an active grenade in it's hand before running away.

The doppleganger of Lena as well as the ligthhouse and the shimmer are destroyed. 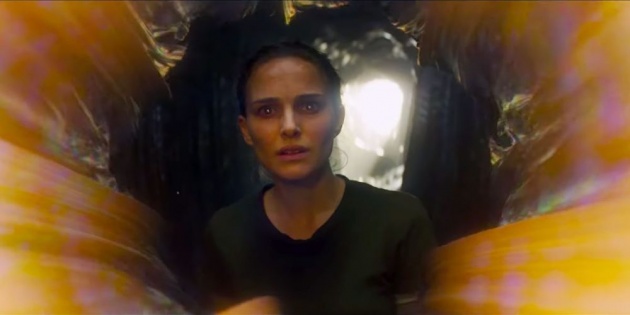 We then flash forward to the end of Lena's debriefing. She is reunited with Kane, who is much better after the shimmers dissapearance.

The movie ends with Lena asking Kane if he is the "real " Kane. He replies that he does not know then asks her the same thing. She doesn't reply and both of their irises are seen glowing. 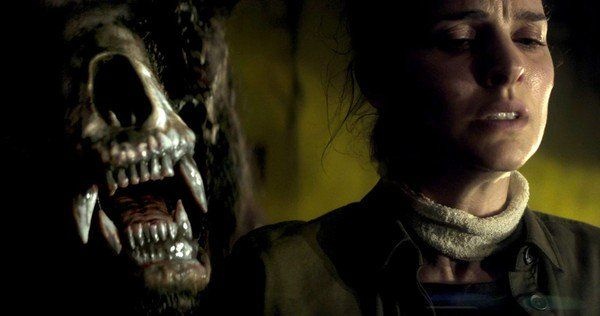 I actually really liked this movie, although I didn't find it necessarily "terrifying". The bear mutant was pretty unsettling though, I will admit.

I enjoyed the themes of this movie which were about genetics, mutation, and in my opinion the singularity.

It was a very interesting look at a possible alien lifeform and their intent or lack thereof. I felt that to be the most interesting part of this movie- the not knowing. "The Shimmer" seems to have no reason other than it's own nature, being to mutate. Which, in a large way made it a greater threat since there was no way to communicate with it.

I enjoyed how the end was left open..I assume the answer to Kanes question is no, but not the same kind of no. Kane is a completely different entity. Whereas Lena is still "the real Lena" the lack of "real" comes from how much of her was mutated while she was in "the shimmer".

I would definitley reccomend this movie. It was a great sci-fi thriller and it had me curious until the very end!

It made me think of things like physics and singularities..in my opinion it was as though "the shimmer" was how said lifeform reproduced. By mutating whatever it could.

Did you see "Annihilation"? What did you think? Did you find it a bit mind altering? tell me in the comments below!