Apple could be the latest casualty in patent war 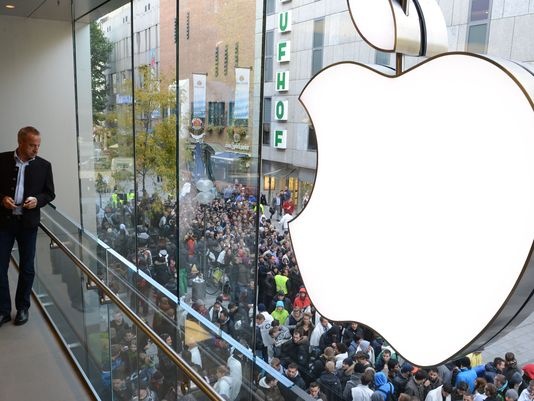 Customers line up to enter the Apple Store in the southern German city of Munich.(Photo: Christof Stache, AFP/Getty Images)

BERLIN — U.S. technology giant Apple is facing $2 billion in damages if found guilty Friday of allegations by a German patent-holding company that it infringed on a cellphone technology it owns.

The case is the latest in a series of lawsuits about patents raging in the European country. Cases have often involved companies such as Apple, Microsoft and Samsung, usually fighting each other.

But unlike those cases, Apple is being taken to court by a German company called IPCom, described by some as a "patent troll" — a company that buys up patents with no plan to use them in products.

Some say the amount of the fine is staggering.

"I am astonished at the amount of the claim," said Anselm Brandi-Dohrn, a patent attorney with von Boetticher law firm in Berlin. "Because an amount of this size has been raised not by a direct competitor but by a patent troll not active on the market, I think judges will look closely at the brief and reasoning for it."

Judges at Mannheim Regional Court in southwestern Germany will decide Friday whether Apple will have to pay out over the patent of a technical feature owned by IPCom, a firm that owns more than 1,200 patents.

The patents involve ways to manage priority emergency access when wireless networks are overloaded. The technology must be used in cellphone manufacturing here, and companies are supposed to pay a licensing fee to IPCom for its use, IPCom says. IPCom claims that Apple has not paid the fee.

"As we in Germany don't have anything like punitive damages, which would have been quite common for these types of cases in the U.S., here the damages are only actual damages, mostly from a fictitious license fee," said Brandi-Dohrn. "It is what Apple would have paid as a reasonable license fee if they had taken out a license from the patent owner."

Apple has said it has been sued 92 times by patent companies in the last two years, and it has more than 220 unresolved patent claims, according to Bloomberg News, and has to employ two lawyers to respond to royalty demands its says are frivolous.

Companies such as IPCom have been criticized because they own a portfolio of patents, although they're not using them in industrial processes — making money instead from license fees, royalties and enforcing patents.

However, a spokesman for the firm rebuked the criticism, saying that the value of patents were made transparent by companies such as IPCom, rather than by the technology companies themselves, which used them for "blackmail."

"Patent troll … is an insult designed to discredit all patent owners," said Alistair Hammond, a spokesman for IPCom. "But it is the companies abusing the intellectual property of others. … There is a world of difference between people who abuse the system and those who simply expect to get paid by the companies using their patents."

The case is the latest of many patent fights appearing in German courts in recent years pitting giant technology firms including Apple, Samsung, Nokia, and HTC against each other in what has become the European front for patent-infringement cases.

Germany is seen as very favorable to patent-holders and as a result, it has become a go-to destination for those shopping for friendly jurisdictions.

"(Germany) has very good judges who are very specialized (in patent law)," said Stefan Eck, a lawyer specializing in patent law at Klaka law firm in Munich. "They deal with it quite quickly … compared to other countries. The court fees are quite low, and it's relatively cheap to file a suit and (go through) proceedings compared with countries such as the U.S. and even the UK. … it does attract lots of companies."

Cases at German courts have seen the banning of Microsoft products including Windows 7, Media Player and the Xbox 360 in Europe's biggest economy, after Google-owned Motorola Mobility brought legal action against the U.S. firm in May 2012.

The German court system also presided over a case which led to the "push" feature — which pushes e-mails to a cellphone — being disabled on Apple handsets for more than a year in Germany following a Motorola Mobility lawsuit.

"You have massive technology companies who accumulate huge war chests of patents, some developed on their own and some just bought," said Hammond. "The approach is that huge rich technology companies turn to each other with a bristling arsenal of patents and say, 'If you don't mind if I use yours, you can use mine.' It's mutually assured destruction."