Learning about bitLanders hyped me because of the thought of earning. Socializing while earning is a jackpot for me rather than sharing my ideas in other sites which won't get me anything. Well that what I thought bitLanders is for but see, the site is far better than just a socializing one because, listen to this, it is supporting charities too!

The idea of charity gives me goosebumps and learning that there are more than one charities which this site has been supporting for years now definitely gives me this light blessed feeling. It somehow enables me to consider that this place is a heaven-sent because I can't just socialize, I can't just earn but I can also give back to the community. 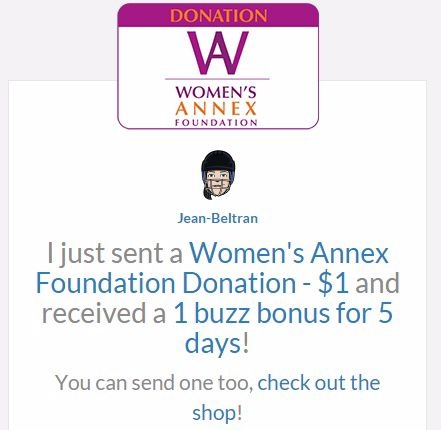 Out of the sixteen charities listed in the shop page which by the way, I had visited more than twice in a day, my eyes were fixed to this purple colored logo of Women's Annex Foundation, now Digital Citizen Fund. Aside from it is my favorite color, the background of the said charity gives me the conviction of sharing my blessings to them. But don't get me wrong, I have plans of sharing to all of the charities, it's just that I have set my first ever earning donated to the Digital Citizen Fund.

Reading on the details of this donation reminded me of one research I had done for my client in Odesk. I was given the task to look for institutions which supports women empowerment as well as protects women from exploitation in certain countries including India, Nepal, Africa and a lot more. I was saddened with the truth that most of the countries around the world lacks institutions which supports women and children. I then thought that if I had learned about Digital Citizen Fund that time, I could have included it in the list.

But most of all, I selected this foundation as it empowers women through digital literacy. As an IT graduate, I am truly in favor of giving each women and children the proper education in line with the digital world. Computers and other digital equipment, high end technology which generally is made of digital systems are what the society is engaging right now. Empowering each woman in using such technology is the best way for each female entity to be confident.

As of the moment, the foundation is operating in Afghanistan, Pakistan, Egypt, and Mexico and our goal is to expand globally. Digital Citizen Fund initially gave Internet access to the women and children of Afghanistan and has made a large impact in the following ways:

More power to bitLanders and thank you for being a vessel for us, your users to be a blessing as well to the women and children of the Digital Citizen Fund.

"There's no greater blessing than being a blessing to others."